Student areas in Nottingham, Manchester and Durham were the worst-hit places in England in the second wave of Covid with up to one in five people getting sick, MailOnline can reveal.

Figures showing the areas hardest hit by coronavirus between September and April reveal that a staggering 18 per cent of the population was infected in Fallowfield.

The Manchester neighbourhood has a population of around 12,000 people and saw 2,202 people test positive for the virus in the second wave.

Fallowfield is a well-known student area with a University of Manchester campus and halls of accommodation where young people were notoriously fenced in during the November lockdown and ripped down the metal barriers in protest.

Durham City, Hyde Park in Leeds and the Park & Castle in Nottingham all also saw more than 15 per cent of their populations infected.

Hyde Park Corner & Woodhouse Cliff in Leeds, and Arboretum, Forest & Trent University, and Lenton & Dunkirk in Nottingham – also student areas – were in the 10 worst-hit places in the country, too.

Dr Simon Clarke, a microbiologist at the university of Reading, said students may have higher rates because they live in large, mixed households and use public transport often – but he said it was impossible to know whether the fact they were students actually made Covid outbreaks worse.

Three non-student places in the top 10 – Sheppey East in Kent, where the Kent variant emerged and the second wave began, and Bastwell and Little Harwood in Blackburn.

The Isles of Scilly, off the coast of Cornwall, is the only place not to have officially recorded a single case of Covid since September. To avoid identifying people, the Department of Health doesn’t record infections if there are fewer than three a week. 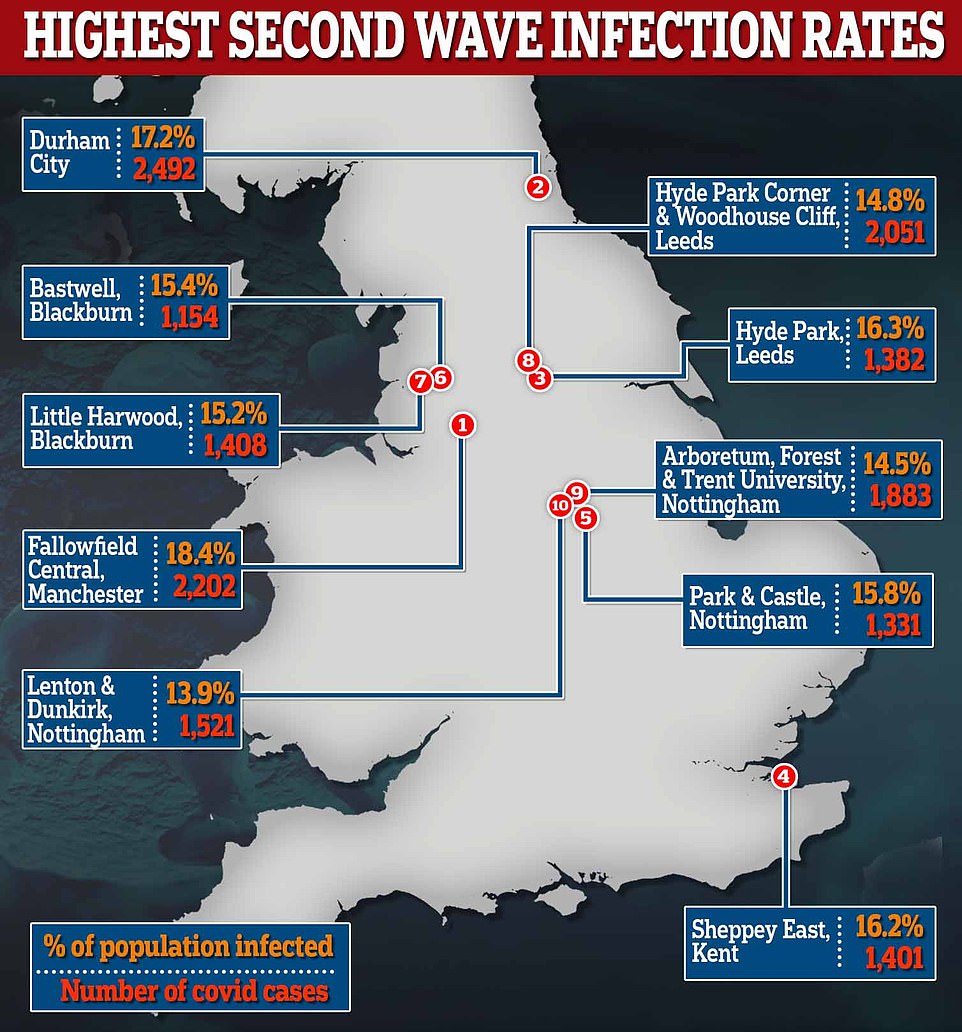 Fallowfield in Manchester had the highest infection rate in the country over the course of the second wave, at 18 per cent. Only three places in the top 10 were not student areas – Sheppey East in Kent and Bastwell and Little Harwood in Blackburn 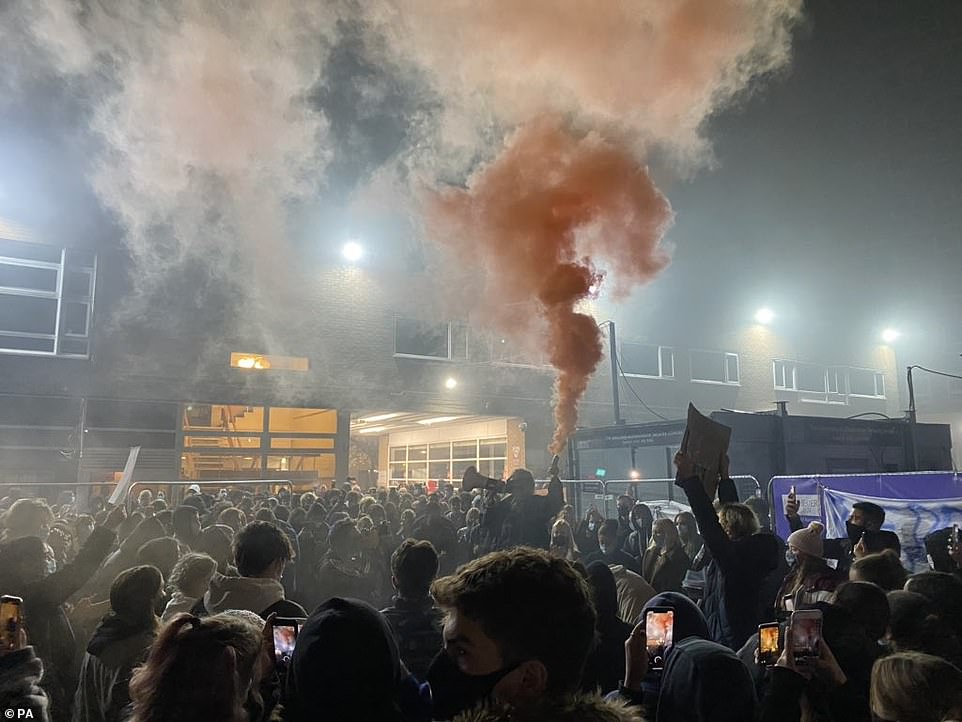 Students at halls in Fallowfield, Manchester, protested in fury after the university tried to fence them into the accommodation and control who went in and out of the campus (Pictured: A demonstration on November 5) 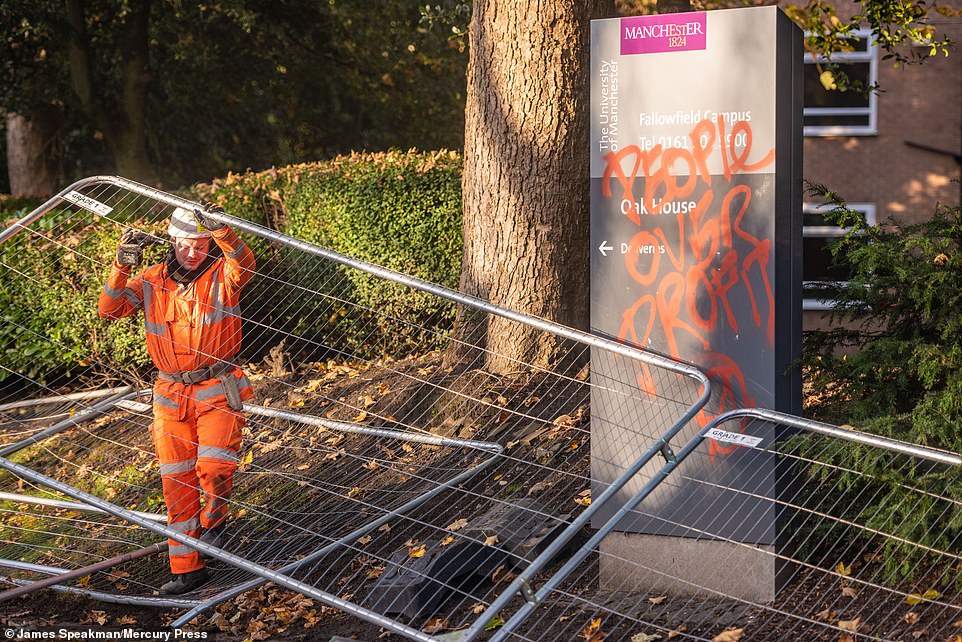 Data broken down into the smallest possible areas – known as middle-layer super output areas (MSOA) – show that every corner of England saw cases in the second wave.

Of 6,791 MSOA areas the Isles of Scilly was the only one to officially record no infections, although the council there said there were one or two in January.

Durham City had the most positive tests, with 2,492 in a population of 14,473 people – an infection rate of 17 per cent, the second highest in the country.

Durham is also a student-heavy area in an inner city, something common to most of the worst-affected places.

Covid is known to be more dangerous in cities because populations are larger and people live closer together, share public transport and visit the same places – such as busy supermarkets or pubs – more often.

And infection rates have regularly been highest among people in their 20s, with almost one in 100 people in that age group infected in the first weeks of January.

Dr Clarke said students are ‘going to be more mobile’ than the general population and they have large networks because they live in mixed, often large, households with different social or family groups.

He told MailOnline: ‘They’re not as social as they would normally be and many of them are at home, but there has been evidence of student mixing and student parties.

‘[In areas with high infection rates] I would expect a high number of houses of multiple occupancy, people working in densely populated work environments like factories, and use of public transport.

On whether the student population was the risk or simply the urban lifestyle combined with random chance, he added: ‘It’s really impossible to say because we know that areas of lower socioeconomic status that aren’t student areas also have problems.’

Department of Health data show there were 22 areas of England where at least one in every eight people caught coronavirus during the second wave.

Almost all of them were in the Midlands or the North of England and most in cities, with areas in Greater Manchester, Staffordshire, Lancashire, Birmingham, Merseyside and Bradford. Two areas of London and one in Kent were the only southern places.

An Office for National Statistics report published in December found that university students said they were following social distancing rules and appeared to be even stricter than the general public.

It found in surveys in October and November that students said:

9 out of 10 ‘always or very frequently’ maintained 2m social distancing;

72-91% did not have visitors inside their homes;

9 out of 10 ‘always or frequently’ thoroughly washed or sanitised their hands after leaving a shared space.

Many said the regulators had negatively affected their quality of life and made them feel lonely or isolated.

The ONS said: ‘The Student Covid Insights Survey (SCIS) shows that students follow coronavirus guidance in much the same way as the general public; however, students were more likely not to have left their home or accommodation in the seven days prior to being surveyed than the general public.’

At least nine areas saw 15 per cent of their entire population test positive.

And the figures don’t even show the whole picture – NHS Test & Trace has admitted it may only catch around half of the true number of infections because many people get no symptoms, some don’t come forward for tests and some tests give wrong results.

The MSOA areas with the most positive tests relative to their population between the start of September and the end of April were:

The three non-student areas on the list are Bastwell and Little Harwood in Blackburn, and Sheppey East in Kent.

Sheppey is believed to be the birthplace of the Kent variant as it is known now, and cases there exploded in October and November before scientists realised there was a new fast-spreading strain of the virus there.

Much of the county was under only loose lockdown rules before the November lockdown and cases surged wildly before anything was done to control the outbreak.

At its height, the outbreak in Swale – the area containing the Isle of Sheppey – saw 1.3 per cent of its population test positive in a single week in December.

The reason behind the high rates in Blackburn is less clear.

The Blackburn with Darwen authority was England’s Covid hotspot on more than one occasion and Bastwell and Little Harwood are in the centre of the town. Densely populated neighbourhoods in low income parts of towns and cities are known to have been harder hit all over the country.

Although outbreaks appear to have been worst in areas with large student communities, the links between student living and Covid cases are unclear.

A study by Cambridge University found that students didn’t appear to trigger outbreaks in the towns or cities around them but that the opposite happened.

Spikes in cases among the students tended to come after the local infection rate had already risen, the study found.

Some were caught having house parties and flouting social distancing rules, with reports of police breaking up large gatherings and fining people in Lancashire, Reading and Hertfordshire, among others.

But many insisted they had stuck to lockdown rules, with the Office for National Statistics concluding in a survey in December that students actually might be better at sticking to social distancing than the general public.

The report said: ‘The Student Covid Insights Survey (SCIS) shows that students follow coronavirus guidance in much the same way as the general public; however, students were more likely not to have left their home or accommodation in the seven days prior to being surveyed than the general public.’

Students in Nottingham, where three of the 10 worst-hit areas were, said they were made ‘scapegoats’ and unfairly blamed for outbreaks in the city.

Nottingham Trent University student Josh Hughes, 21, told NottinghamshireLive in March: ‘It is clear that students have been made scapegoats by some in society yet children in schools are not looked at with the same attitude.’

This was a claim backed by the National Union of Students, which said the pandemic has had ‘harsh’ effects on students.

‘The pandemic has had detrimental impacts on all of us, but most harshly on students,’ said an NUS spokesperson.

‘Alongside the threat of the virus itself, students have been through turmoil over the past year, only to be scapegoated and disregarded by government and institutions time and time again – despite following all the rules responsibly and stepping up to support other students, staff and local communities.’