The UK’s drug regulator, which polices the safety of Covid jabs, has also had reports of inoculated Brits being left screaming, yawning or crying afterwards.

Officials ask people to report any health issues they have had after being vaccinated in case a serious side effect does crop up. But the 65-page list of alleged reactions is full of oddities.

And some of these are even more common than actual medical problems. Rare brain blood clots that scared German regulators were reported five times, while six people reported ‘teething’ and 42 claimed crying was a side effect.

Bosses at the Medicines and Healthcare products Regulatory Agency (MHRA) say ‘the suspected reactions described in this report are not proven side effects of Covid vaccines’. But they are kept on record in case any later do turn out to be linked.

Scandal swirled around the jab last week after more than a dozen European nations stopped using it because of fears it could be linked to deadly blood clots.

But regulators dismissed the fears and said clots were happening no more often than usual and the fact the people had been vaccinated recently was just a coincidence. The verdict prompted most countries in Europe to U-turn on their bans. 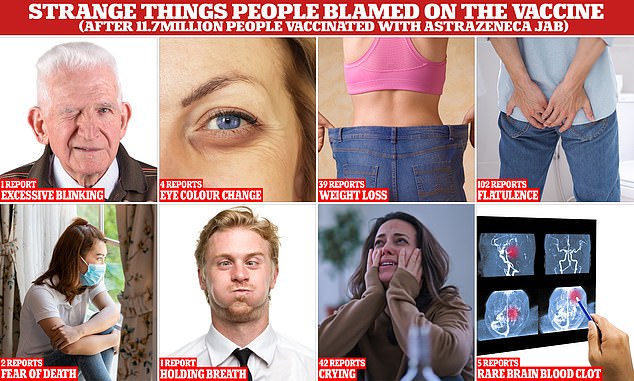 The bizarre list comes from Yellow Card reports submitted to the MHRA, which assesses the safety of the vaccine as it is rolled out. MHRA officials say ‘the suspected reactions described in this report are not proven side effects of Covid-19 vaccines’

The bizarre list of side effects comes from Yellow Card reports given to the MHRA, which assesses the safety of the vaccine as it is rolled out.

It has so far kept track of all the potential side effects that happened among the first 11.7million people to get the Oxford/AstraZeneca jab in the UK.

The reactions include common side effects like headaches, fevers and muscle pains which have all been reported thousands of times and are known to be normal, affecting more than one in 10 people and clearing up on their own.

More serious health problems or causes of death are also included, such as stroke, heart attack and sepsis – although none have been linked to the jab.

The reason that severe illnesses and deaths are recorded on the vaccine report is to make sure they don’t happen more often than they do in the normal population.

This type of monitoring allowed the MHRA to respond quickly last week to claims the jab causes blood clots, and it could prove they weren’t happening unusually often.

As well as these side effects and medical issues, people strangely also report normal things that happen to them after the vaccine or even changes to their private lives.

Two people reported that they had retired after getting the vaccine in submissions to the Yellow Card system.

One person reported ‘tobacco user’, suggesting that they had taken up smoking and attempted to link that to the vaccine, while another reported their diet had failed.

SOME OF THE ODD EFFECTS REPORTED AFTER THE COVID VACCINE

None are proven side effects of the jab and the events are self-reported by members of the public.

None of the Covid vaccines in use have been linked to severe side effects, except for allergic reactions in a tiny number of people – around 200 out of 12million AstraZeneca recipients in UK.

Five Brits said they had been bitten or stung by an insect, 42 reported crying bouts, and three said they were left screaming.

Physical effects that were more closely related to medical issues but seem extremely unlikely to be linked to a Covid vaccine included excessive blinking (one), eyes changing colour (four), growing teeth (six) and losing teeth (one).

And 102 people reported flatulence – passing wind – as a potential side effect, while 558 simply said they had been ‘feeling abnormal’ but did not explain how.

The MHRA explained that most things people say in Yellow Card reports aren’t linked to the vaccine at all.

It said: ‘The Yellow Card scheme is a mechanism by which anybody can voluntarily report any suspected adverse reactions or side effects to the vaccine.

‘It is very important to note that a Yellow Card report does not necessarily mean the vaccine caused that reaction or event.

‘We ask for any suspicions to be reported, even if the reporter isn’t sure if it was caused by the vaccine. Reports to the scheme are known as suspected adverse reactions (ADRs).

‘Many suspected ADRs reported on a Yellow Card do not have any relation to the vaccine or medicine and it is often coincidental that they both occurred around the same time.

‘The reports are continually reviewed to detect possible new side effects that may require regulatory action, and to differentiate these from things that would have happened regardless of the vaccine or medicine being administered, for instance due to underlying or undiagnosed illness.

‘It is therefore important that the suspected ADRs described in this report are not interpreted as being proven side effects of Covid-19 vaccines.’

People can report their symptoms after a vaccine through the MHRA’s Yellow Card report website and anyone who has had a jab can do so.

The focus on potential side effects of the AstraZeneca vaccine emerged last week when more than a dozen countries in Europe suspended the use of the jab because of fears about blood clots.

Officials worried the jab might be linked to a type of deadly clot called cerebral sinus vein thrombosis.

It occurs when the vein that drains blood from the brain is blocked by a blood clot, resulting in potentially deadly bleeding on the brain. Former US presidential candidate Hillary Clinton developed one in 2012 and made a full recovery.

Symptoms can quickly deteriorate from a headache, blurred vision and faintness to complete loss of control over movement and seizures.

Regulators have asked people to phone their doctor if they suffer a headache for four days or more after getting a Covid jab.

But according to Britain’s health chiefs, CSVT is so rare that experts aren’t even sure how common it is in the general population.

MHRA chief Dr June Raine said the blood clots in the vaccinated patients could also have been caused by Covid itself, rather than the vaccine. 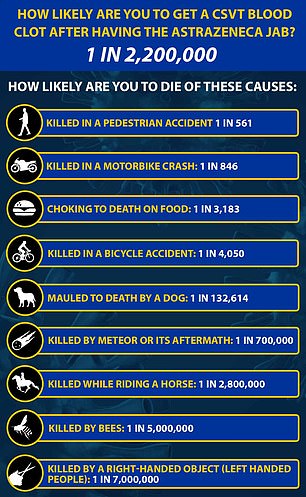 John Hopkins University estimates CSVT affects five in a million people in the US every year, which would suggest 330 patients in Britain suffer from the condition annually.

According to the university, it can affect patients with low blood pressure, cancer, vascular diseases and those prone to blood clotting. Head injuries can also trigger the condition.

The MHRA said five out of 11million Brits injected went on to develop cerebral sinus vein thrombosis (CSVT). The cases were all men aged between 19 and 59 and one was fatal.

Europe’s own drugs watchdog has spotted an additional 13 reports of CSVT in the continent’s vaccinated population.

After an investigation, the European Medicines Agency concluded that there was no proof the vaccine was increasing the risk of CSVT or of blood clots in general, and it told countries to keep using the jab.

Most countries lifted their bans, except Sweden, Norway and Denmark.

Dr Raine said: ‘There is no evidence that that blood clots in veins is occurring more than would be expected in the absence of vaccination, for either vaccine.

‘We have received a very small number of reports of an extremely rare form of blood clot in the cerebral veins (sinus vein thrombosis, or CSVT) occurring together with lowered platelets soon after vaccination.

‘This type of blood clot can occur naturally in people who have not been vaccinated, as well as in those suffering from Covid-19.

‘Given the extremely rare rate of occurrence of these CSVT events among the 11 million people vaccinated, and as a link to the vaccine is unproven, the benefits of the vaccine in preventing Covid-19, with its associated risk of hospitalisation and death, continue to outweigh the risks of potential side effects.

‘You should therefore continue to get your jab when it is your turn.’