A hybrid aircraft that is quieter than a Hoover and harks back to the tri-planes of the First World War is aiming to be at the forefront of eco-friendly air travel.

Faradair, based at Duxford, home of the Imperial War Museum, aims to have its bio-electric aircraft (Beha) ready for commercial flights by 2026 with a full fleet available by the end of the decade.

Electric motors will orchestrate take-off and landing which will help reduce noise pollution, as the company moves a step closer to carbon neutral travel.

The Beha is expected to register around 70 decibels (dB) when taking off and landing, around the same noise level as a household vacuum cleaner, whereas traditional jet engines can reach 140dB.

Biofuel engines will take over while cruising and power a turbogenerator. The engines will also help recharge the electric motors, with the assistance of solar panels. 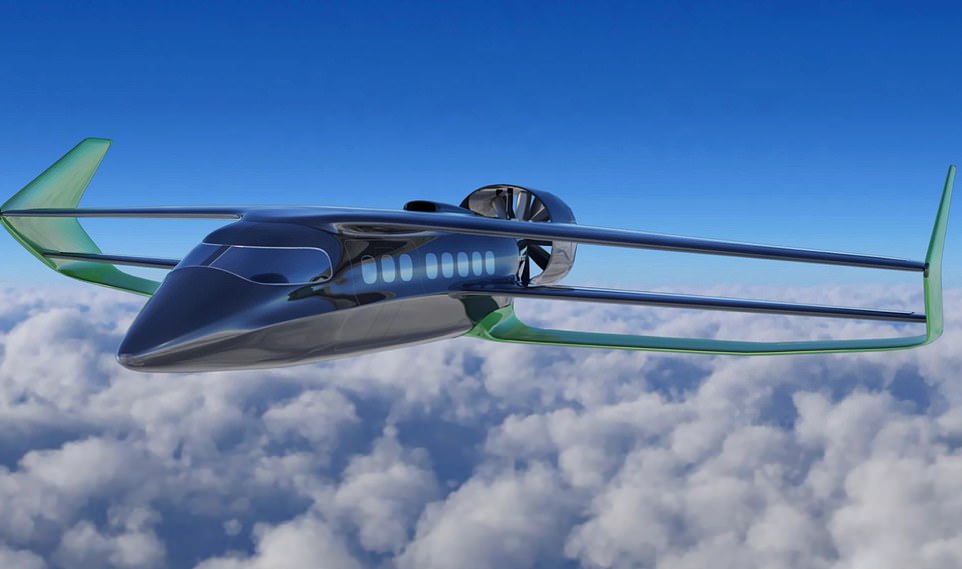 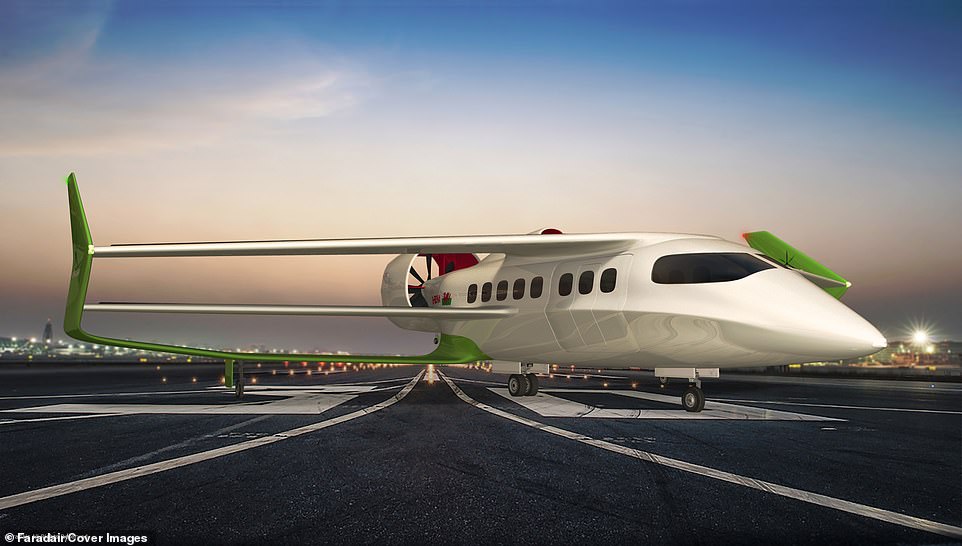 The airplane sports a triple-box wing design — a throwback to an experimental design first used in the 1920s — and is designed to be eco-friendly, and eventually carbon neutral 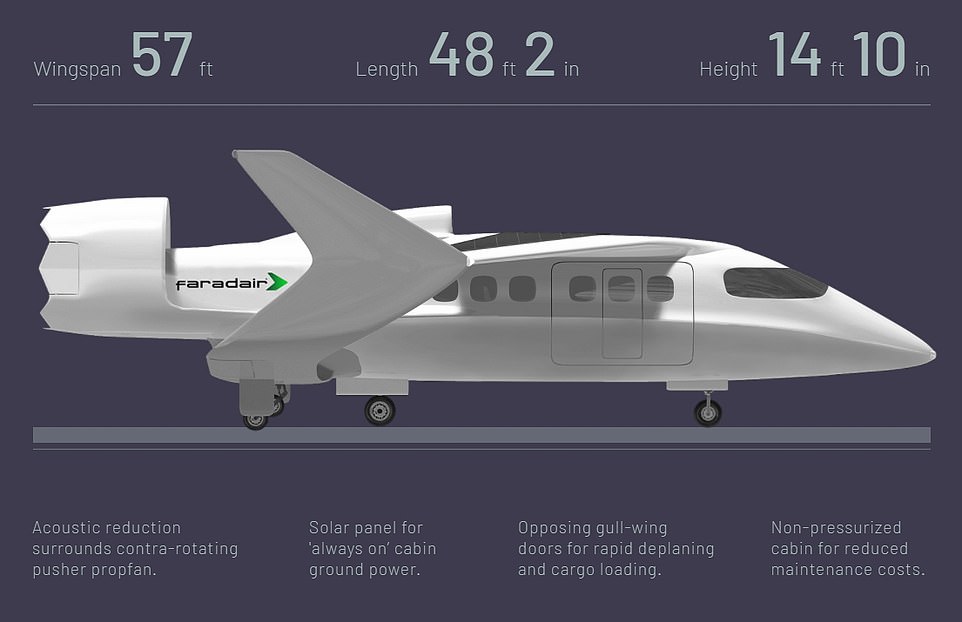 WHAT IS SUSTAINABLE AVIATION FUEL?

Sustainable aviation fuel (SAF) is produced from sustainable feedstocks and is very similar in its chemistry to traditional fossil jet fuel.

Using SAF results in a reduction in carbon emissions compared to the traditional jet fuel it replaces over the lifecycle of the fuel.

Some typical feedstocks used are cooking oil and other non-palm waste oils from animals or plants; solid waste from homes and businesses, such as packaging, paper, textiles, and food scraps that would otherwise go to landfill or incineration.

Other potential sources include forestry waste, such as waste wood, and energy crops, including fast growing plants and algae.

The Beha will be the first aircraft produced since the 1920s to have a three-winged box design.

Perhaps the most famous tri-plane in popular culture is the Fokker Dr.I, made in Germany and flown by First World War fighter pilot Manfred von Richthofen, ominously referred to as the ‘Red Baron’ who is credited with the destruction of 80 opposing planes before he died in battle in 1918.

Unlike the Red Baron’s Fokker tri-plane, which was powered by an Oberursel Ur.II engine, the 21st century Beha runs on electric motors and a biofuel engine.

Mr Cloughley hopes to one day do away with any form of petrol-based fuel source but sees the biofuel engine as an interim solution on the path to a true carbon neutral version further down the line.

At the moment, the technology does not exist for a plane that makes no emissions and a hybrid is the best compromise, he believes.  ‘All electric wasn’t going to be possible straight off the bat,’ he told The Guardian.

‘The power density simply isn’t there for anything of any meaningful size. That means that we have to go hybrid; it means that sustainable aviation fuels [SAFs] will be the ideal.’

Sustainable aviation fuels are made from leftover materials, such as waste oil and surplus food and livestock feed. This recycling reduces carbon emissions compared to traditionally manufactured aviation fuel but is still polluting.

Currently just six per cent of all jet fuel is SAF but the UK Government hopes that by 2030 this percentage will be around 83 per cent.

The vehicles will be powered by a 1,600hp bio-diesel engine which will work alongside batteries to fly at speeds of up to 230mph. Start-up firm Faradair revealed it wanted to become the world’s most environmentally-friendly airplanes back in 2014 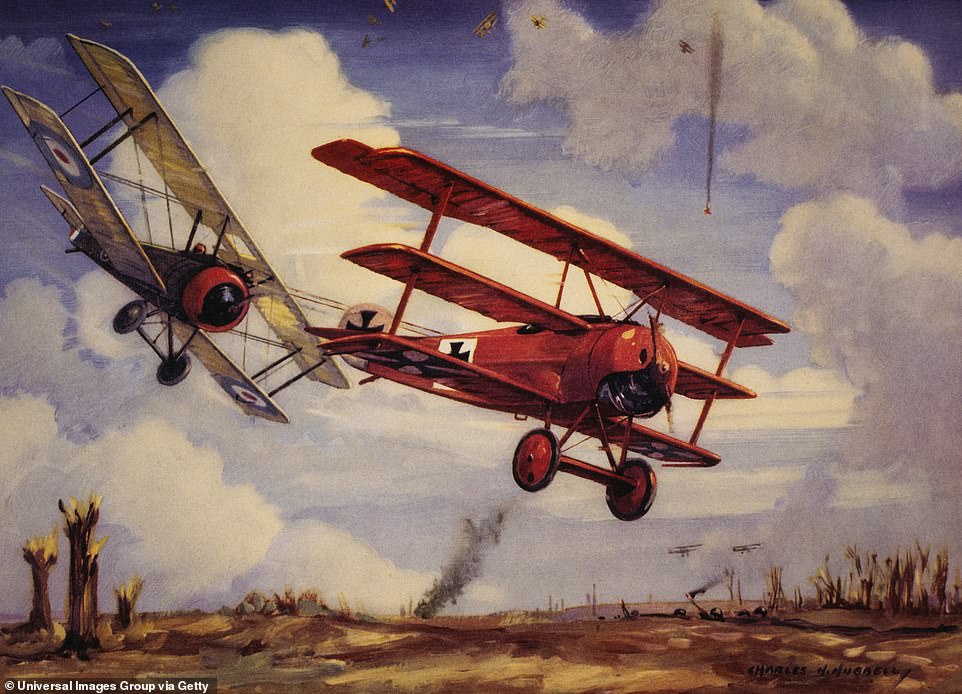 In World War One, Fokker Dr. I triplanes were used by Germany as the era of the dogfight and aerial warfare was born. The ‘Red Baron’shot down 19 enemies in one of the triplanes before he died in battle in 1918 aged 25 (pictured, artist’s impression) 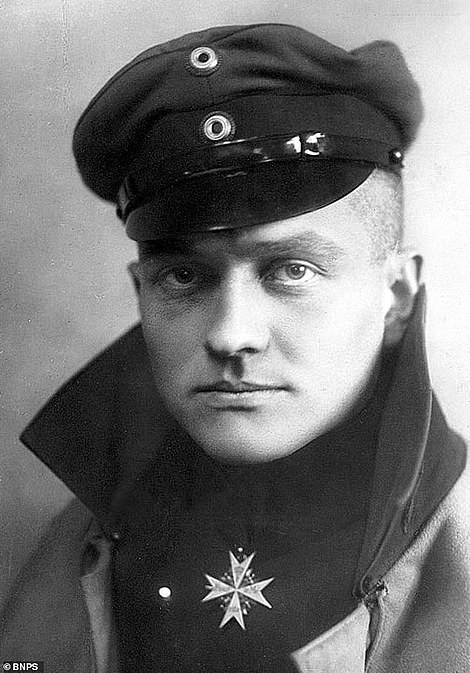 The most famous triplane was the one flown by the German World War One fighter pilot ace Manfred von Richthofen, ominously referred to as the ‘Red Baron’

Sustainable aviation fuels are made from leftover materials, such as waste oil and surplus food and livestock feed. This recycling reduces carbon emissions compared to traditionally manufactured aviation fuel but is still polluting.

Currently just six per cent of all jet fuel is SAF but the UK Government hopes that by 2030 this percentage will be around 83 per cent.

Take off and landing of Beha will be controlled by the electric motors while the engine takes over as the primary power source throughout the cruising phase of the flight.

The company has been in a long-term partnership with Swansea University to perfect its unique ‘triple box-wing’ design which is intended to maximise lift.

Faradair’s concept plane was purposely designed to allow it to take off and land on runways less than 1,000 feet (300 metres) long.

It utilises a system called ‘vectored thrust’ from two contra-rotating propfans in the rear which are housed in a sound-cancelling area of the vehicle.

Engineers working on the project say these, in combination with electric-powered take off and lansing, means noise levels will be far lower than traditional jet engines.

Take-off and landing will be dominated by an electric motor powered by the batteries and the engine will be the predominant power source throughout the cruising phase of the flight, while also recharging the batteries – with some help from fixed solar panels 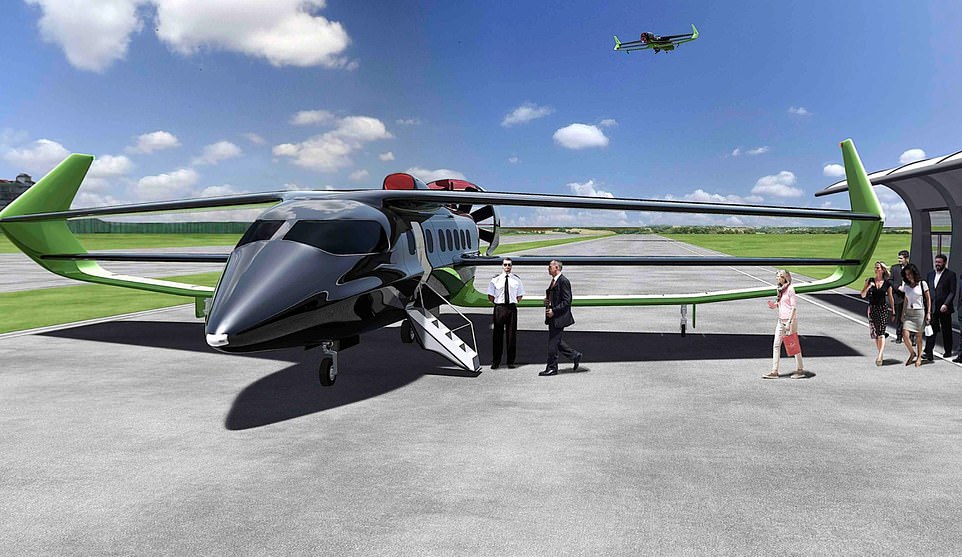 The budding company, based in Duxford, is working in partnership with Swansea University to perfect its unique ‘triple box-wing’ design which is intended to maximise lift

The three wing design of the Beha is reminiscent of a bygone era when pioneering aviators were trying to find the most efficient airplane design.

Triplanes produce more lift than biplanes due to an increased surface area.

At the start of the 20th century this enabled planes to be built with a shorter wingspan that were easy to get in the air, ascended quickly and were highly manoeuvrable

In World War One, Fokker Dr. I tri-planes were used by Germany as the era of the dogfight and aerial warfare was born.

Despite its innovative design, it is widely accepted to have been inferior to the planes used by the Allied forces, which were faster and more nimble.

The most famous triplane was the one flown by the pilot Manfred von Richthofen, ominously referred to as the ‘Red Baron’ as his Fokker was painted bright crimson to make it recognisable on the ground.

The Red Baron is credited with the destruction of 80 opposing planes before he died in battle in 1918 aged 25 when he was shot down over France.

After his demise he was labelled as Germany’s top ace and his position as commander of Fighter Wing I (Jagdgeschwader 1) was filled by Hermann Göring, the man who would achieve notoriety decades later as one of Adolf Hitler’s most trusted advisors and the founder of the Gestapo.

One is a propellor-powered short-haul plane, a direct rival to Beha.

Airbus sees hydrogen fuel cells, which produce power and the only waste product is water, as the future of aviation.

In December, Airbus also revealed its designs for self-contained hydrogen fuel cell pods that attach to the underside of aeroplane wings.

Each pod contains a propeller and all the fuel, motors, cooling and engineering needed to provide thrust on long-range flights.

The units are designed to be detachable, so they can can be clipped on and off after a flight to speed up any maintenance that may be required.

Airbus hopes that the pods could could revolutionise air travel and usher in a new era of zero-emission flights.

In the design, three hydrogen fuel cell pods are attached to the underside of each of the aircraft’s wings.

Hydrogen and air are stored inside each individual pod and channelled to the fuel cell, where they combine to generate electric current.

Beha is predominantly intended for passenger transportation but would also be able to carry cargo of up to five tonnes by striping out the seats. The transition from freight to passenger flight can be done in 15 minutes, Faradair claims.

Mr Cloughley says the plane is a compromise which is necessary to improve aviation’s environmental credentials in the short-term while fully carbon neutral alternatives are developed.

‘[It will not be] the sleekest, the sexiest, nor the fastest, the highest or the furthest flying aircraft,’ he says.

But he believes its appeal is in its low emissions, cheapness and flexibility. Its green credentials will only improve as electric motors and battery tech continues to improve, Mr Cloughley says.

Beha and Faradair’s central principle includes electric power and short-haul flights, but other manufacturers have taken a different approach.

Aviation giant Airbus, for example, is focusing its efforts on hydrogen power. In September 2020 it unveiled three new plane designs which it wants to have in circulation by 2035. 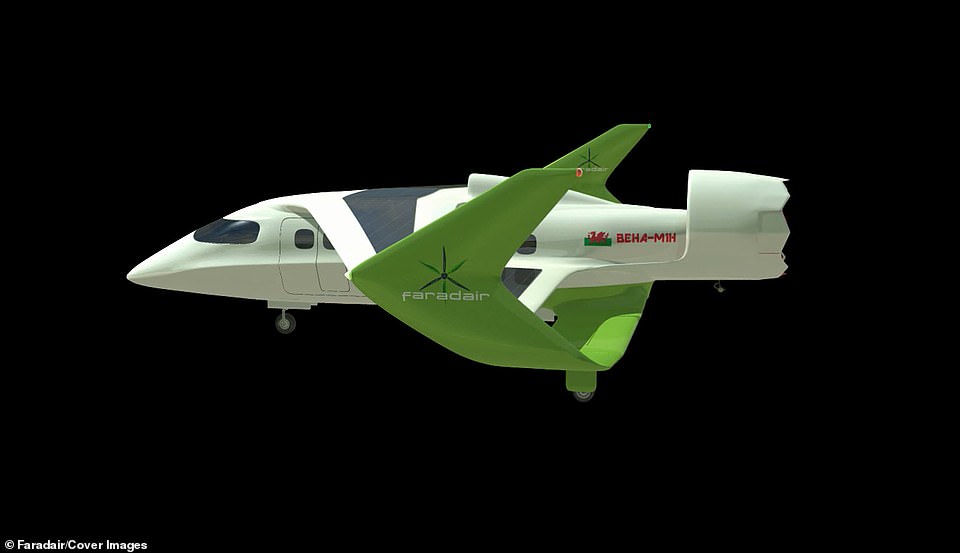 Faradair’s concept plane is called Behaand builds on its previous designs which focus on allowing it to take off and land on runways less than 1,000 feet (300 metres) long

A full-size, commercially-available aeroplane powered by hydrogen has completed a successful flight over the skies of Bedfordshire, in a world first.

The company behind the maiden flight is a US-UK firm called ZeroAvia which hopes commercial aviation can be emission free by 2023.

The successful 20-minute flight included a taxi, take-off, full pattern circuit and landing, and will be followed by a 250-mile flight from the Orkney Islands later this year.

The six-seater Piper M-class aircraft took off from Cranfield Airport, which is also the location of ZeroAvia’s research and development facilities.

Hydrogen fuel cells create electricity to power a battery and motor by mixing hydrogen and oxygen — which is provided by the air — via a chemical reaction.

The only waste product produced by this process is water, unlike traditional aviation which is a major contributor to greenhouse gas emissions.

ZeroAvia chief executive Val Miftakhov said: ‘It’s hard to put into words what this means to our team, but also for everybody interested in zero-emission flight.

‘While some experimental aircraft have flown using hydrogen fuel cells as a power source, the size of this commercially available aircraft shows that paying passengers could be boarding a truly zero-emission flight very soon.’