British Airways is considering using some of its long-haul passenger jets on European routes once the government lifts travel restrictions.

Before the pandemic, BA used its fleet of smaller Airbus A300-series aircraft on its short haul aviation routes while the larger wide body jets concentrated on its long haul routes.

It is understood BA is considering using some of its Boeing 777s and Airbus A350s servicing European routes as they have twice the capacity of the smaller jets. 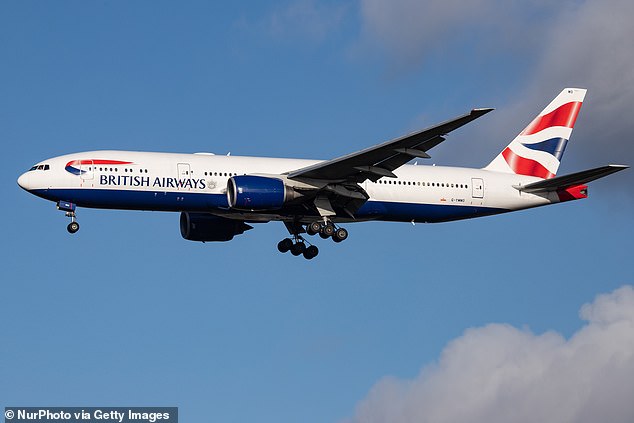 British Airways is considering putting some of its largest aircraft such as the Boeing 777-200, pictured, on European routes to cope with demand once foreign travel restrictions are lifted 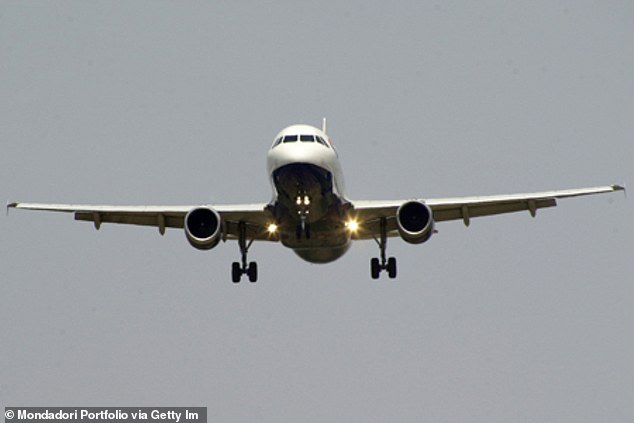 The pandemic has seen BA retire its fleet of Boeing 747 jumbo jets because the massive four-engine aircraft were no longer financially viable.

Greece and Spain are currently working on plans to reopen their tourism industries and are desperate to welcome British holiday makers to resorts over the summer.

It is likely that tourists will require a vaccine passport to travel this summer.

According to Bloomberg, BA will make a firm decision on how to deploy its fleet when they know for certain which routes they can reopen and the demand from travellers.

A spokesperson for the airline told MailOnline: ‘We keep our operation under constant review.’

Prime Minister Boris Johnson admitted that vaccine passports are likely to become ‘a feature of our life in the future’.

The Prime Minister acknowledged that documents providing proof that someone has received a coronavirus jab ‘raise all sorts of issues’.

He said: ‘It’s a novel one for our country. We’ve never had this type of question before within the domestic UK economy, within our own home market.

‘Though clearly vaccine passports as an idea are not new when it comes to international travel.

‘There’s been certificates for things like yellow fever and other diseases in the past, and I’m sure that that will be a feature of our life in the future.’ 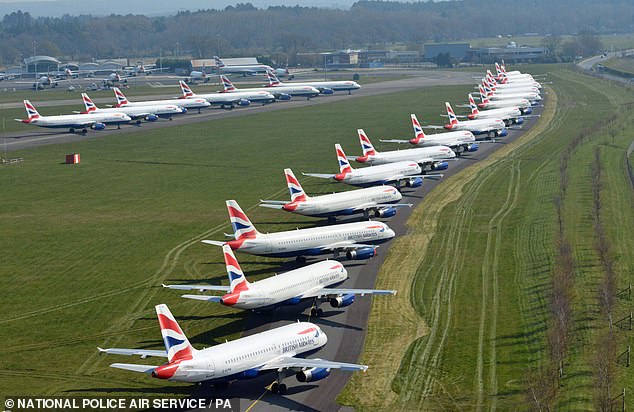 The government is considering introducing Covid-19 vaccination passports so the airline industry can resume operations, including these parked up jets at Bournemouth Airport

Mr Johnson said there are ‘some complexities’ regarding how such a scheme will affect unvaccinated people such as children and those ‘not medically able’ to receive a jab.

He added: ‘We’re looking at what they’re thinking of in other countries and we’ll be making sure we report back to everybody as soon as we possibly can.’

It is understood he is considering the possibility of the NHS coronavirus app featuring a digital health passport, which would carry details of vaccinations and negative test results.

Proof of a recent negative coronavirus test or having been vaccinated could then be used to attend events held within the UK or to gain entry to foreign countries, depending on border rules.

Research has shown that three out of four people would be willing to carry proof they have been vaccinated if it meant they could travel, a new survey suggests.

The poll indicated that acceptance is highest among people aged over 65 (89 per cent), who have been offered Covid-19 jabs ahead of most younger people.

The figure falls to 67 per cent for 18-24-year-olds, but London City Airport, which commissioned the research, believes it will rise as vaccines are rolled out further.

Prime Minister Boris Johnson has pledged that all UK adults will be offered their first dose by the end of July.

Under his road map, international holidays could be permitted for people in England from May 17.

Currently, anyone who gets a jab is given a vaccination card and has their medical records updated.

The European Union has confirmed plans for a ‘digital green pass’ to allow people to travel into the bloc by showing they have been vaccinated or had a negative Covid test.

The London City survey of 2,014 adults also indicated that 72 per cent of frequent flyers want to return to travel as soon as restrictions are lifted.

Some 71 per cent of those polled believe travel should be allowed between countries that have the virus ‘under control’.

The airport’s chief executive Robert Sinclair said: ‘After the weakest first quarter that anyone in the industry can remember, the survey results show that the Prime Minister’s road map has given British people hope again and it is very pleasing to see that so many see travel as a priority as restrictions are eased.

‘It has also given our airline partners confidence to schedule services throughout the summer and I am delighted that we will be able to connect travellers to so many destinations across the UK and Europe for the most well-deserved summer holiday they will ever have.

‘The challenge now for industry and Government is to make sure that May 17 is not another false dawn and to agree travel standards with our key international partners as soon as possible which will allow everyone to fly safely from early summer.

‘And when this is achieved, I would anticipate another surge in bookings that will not only be a huge shot in the arm for the industry but demonstrate that we can finally begin our recovery.’