BY HARRIET LINE, CHIEF POLITICAL CORRESPONDENT FOR THE DAILY MAIL

A delusional Vladimir Putin pleaded against more sanctions yesterday as he tried to claim Russia had ‘no bad intentions’ and that reports of Ukrainian cities being bombed were ‘fakes’.

Despite the horrific destruction wrought by his forces, the Russian president dismissed damning evidence of war crimes by his forces as ‘gross propaganda’.

Instead he tried to encourage other countries to ‘normalise’ relations with his government. But in a sign the West’s moves to isolate Moscow are working, Putin urged against fresh sanctions – claiming they would only exacerbate the situation. 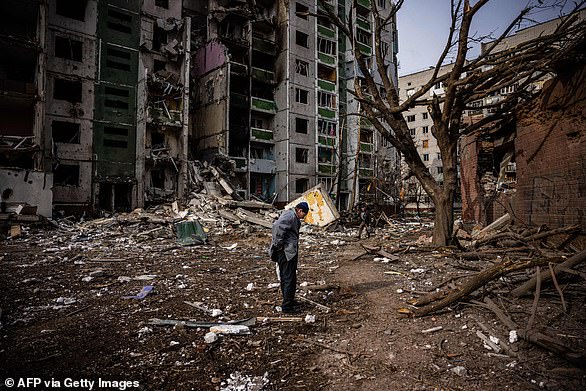 Forty-seven people died on March 3 when Russian forces hit residential areas, including schools and a high-rise apartment building, in the northern Ukrainian city of Chernihiv (pictured on March 4), officials said 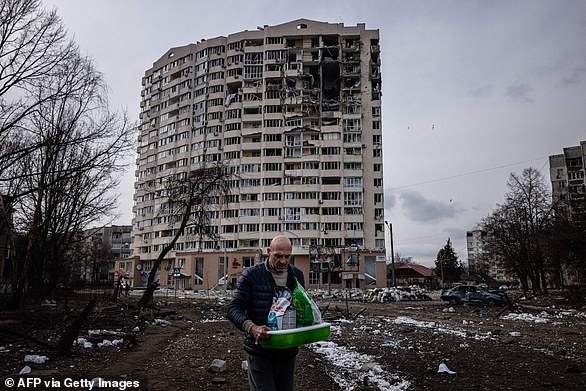 His extraordinary claims about the Russian bombing campaign came in a call with the German Chancellor Olaf Scholz, in which Putin said that ‘the alleged ongoing air strikes of Kyiv and other large cities are gross propaganda fakes’.

He also repeated demands for the recognition of Crimea as part of Russia and of the ‘sovereignty’ of separatist territories in eastern Ukraine as conditions for peace talks.

Earlier, the president said: ‘There are no bad intentions towards our neighbours.

‘And I would also advise them not to escalate the situation, not to introduce any restrictions. We fulfil all our obligations and will continue to fulfil them.’

He added: ‘We do not see any need here to aggravate or worsen our relations. And all our actions, if they arise, they always arise exclusively in response to some unfriendly actions, actions against the Russian Federation.’

European Commission president Ursula von der Leyen, meanwhile, said the EU was ready to hit Russia with more curbs, adding: ‘To be very clear, we are ready to take further severe measures if Putin does not stop and reverse the war he has unleashed.’

Ministers have been criticised over the speed of the UK response, but insist the measures are the most swingeing ever imposed by Britain. Yesterday Justice Secretary Dominic Raab said the UK was ‘at the vanguard’ of sanctions on Kremlin-linked money.

Asked why Brussels had sanctioned more individual Russian elites than Britain, he said: ‘The question is not whether it is individuals or companies – it is where the money is flowing.’ 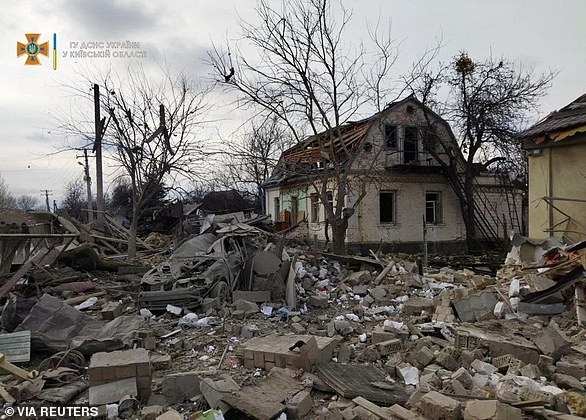 Russia has been increasingly waging a war of terror against Ukrainian civilians after attempts to rapidly capture the country failed. Shelling has targeted small villages and towns, such as Markhalivka (pictured)

Separately, he said: ‘These measures… are all aimed at tightening the noose, if you like, and starving off the finance that is going into Putin’s war machine.’ Mr Raab also backed giving over seized Russian oligarch properties in the UK to Ukrainian refugees.

The move has been called for by the Liberal Democrats and Housing Secretary Michael Gove. Mr Raab told LBC radio he would ‘absolutely’ support it, adding: ‘We are looking at everything in the round, it is a team effort across Government… and, of course, the Prime Minister is driving this very hard.’