Britain was too slow to ramp up its Covid testing capacity and introduce masks, the boss of No10’s new pandemic-fighting body has admitted.

Dr Jenny Harries, chief executive of the UK Health Security Agency — which begins work today, conceded that officials have ‘an awful lot to learn’ after a catalogue of failures early on in the crisis.

She said the country was ‘not fully prepared for this pandemic’, adding that ‘it would have been good to have had more tests’ and that asymptomatic spread had not been ‘considered carefully’.

Dr Harries, who is currently England’s deputy chief medical officer, came under fire last spring for defending the UK’s decision to stop swabbing the public, saying it was ‘not appropriate’.

She later said there was no proof more testing would’ve saved more lives — despite mass-swabbing being at the heart of every successful Covid containment strategy worldwide.

Dr Harries is at the helm of the UKHSA, which will replace Public Health England and aim to protect the UK in the face of future disease outbreaks. The agency will initially focus on fighting Covid before tackling future viral outbreaks or biochemical attacks.

PHE is being axed following widespread criticism of its handling of the Covid crisis, which Boris Johnson slammed as ‘sluggish’ last year.

Dr Harries has been advising the Government throughout the current pandemic and oversaw the UK’s response to the Russian novichok poisonings in 2018. 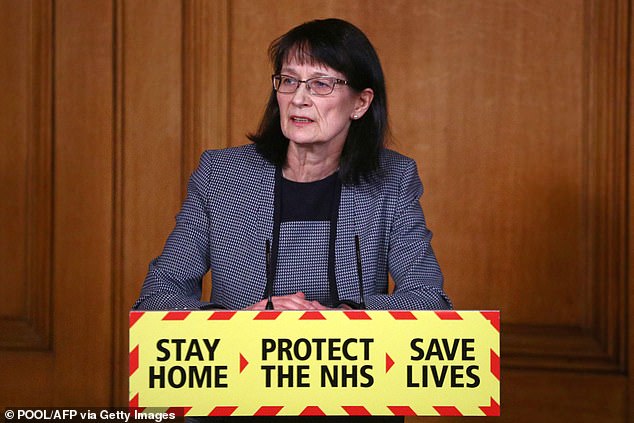 Dr Jenny Harries, the deputy chief medical officer for England, conceded that officials have ‘an awful lot to learn’ after a series of failures early in the crisis

‘I think we share some of those failings with many other countries.’ Asked if the initial response to the pandemic was poor, she said: ‘I think it had merits and it had things that we would wish to improve.’

She said that while officials had looked at asymptomatic transmission, it had not been overlooked.

It’s thought that at least 30 per cent of patients who pass on the virus do not show any signs of illness.

She added: ‘So obviously the response that we put in place and some of the interventions were not accounting for that high degree of numbers of asymptomatic cases, so I think there’s learning as we’ve gone through.’

Asked about face coverings indoors, which were not initially recommended, she said: ‘We’ve learned more, as I’ve said, about asymptomatic transmission, and I think we would recommend face coverings earlier.’

Dr Harries said the issue around testing was that more tests were needed early on.

PHE was heavily criticised over a decision to stop community testing and contact tracing last March after it became clear the virus was spreading at a fast pace.

Dr Harries said: ‘We were using the 2,000 tests a day that we had – maximum – to save lives in the best way we could.’ There are now ‘hundreds of thousands of tests available,’ she added.

‘So, yes, it would have been good to have had more tests and, yes, we would have used them, but we’ve now processed, I think, nearly 90 million tests, so clearly (a) lesson has (been) learned and, I think, (there are) lots of opportunities going forward.’

Dr Harries said the aim of UKHSA is to bring expertise under one roof to fight future threats, including pandemics.

Asked what the mission is, she said: ‘I think the mission is that I wake up every morning and worry about protecting the country, and that clearly is the most valuable mission in public health terms.

WHAT IS THE UKHSA?

The UK Health Security Agency — which was originally meant to be called the National Institute of Health Protection — launched today, April 1.

Initially its work will focus on the continued fight against coronavirus.

But once the UK gets on top of the Covid crisis, UKHSA will start preparing for future outbreaks of infectious diseases.

The body will also advise the Government on biochemical attacks on the UK.

UKHSA will bring together Public Health England, the Joint Biosecurity Centre and NHS Test and Trace.

All the organisations, which ultimately answer to the Department of Health, will basically be streamlined and run from under one roof.

The body will be closely connected to local public health teams who have been carrying out their own contact tracing programmes.

‘We have learned an awful lot from the pandemic and the value, I think, in the new UK Health Security Agency is in continuing that work, so it’s about putting all of the expertise in the country under one roof.’

Asked if this means moving faster in future, she said: ‘I think one of the things which is evident, not just for the UK of course but for many other countries, is the sheer scale of the problem that the pandemic has caused.

‘And whereas I would recognise the work of Public Health England colleagues, for example, over many years, managing 10,000 outbreaks a year – not of the scale that we’ve seen with this particular pandemic.

‘So we need something which is proportionate to the problems we have and scalable very rapidly.’

UKHSA will be fully up and running by the autumn and will bring NHS Test and Trace and the Joint Biosecurity Centre, which advises on lockdowns, under one roof.

PHE’s health improvement work, which includes tackling obesity and cutting down on smoking, will be passed to the Department of Health.

UKHSA is the final name for the National Institute of Health Protection, which was set up last August when it was announced PHE would be dismantled.

Baroness Dido Harding, who was originally tipped for the top UKHSA job and has also overseen NHS Test and Trace, will step down as head of the department this month.

At the helm of UKHSA, Dr Harries will be in control of much of the country’s long-term coronavirus fight and future responses to similar outbreaks.

She has been defensive of the Government’s actions during the pandemic even in the face of critics and evidence suggesting it could have saved more lives by acting faster during the first wave.

Dr Harries defended the UK’s decision to stop testing the public for coronavirus in spring 2020, saying it was ‘not appropriate’.

She later said there was no proof that doing more testing would have saved more lives, although it is the approach the Government is now following to control Covid outbreaks.

On testing everyone suspected of having the virus, Dr Harries said in a briefing last March: ‘There comes a point in a pandemic where that is not an appropriate intervention,’ the Financial Times reported.

The UK had stopped testing people because PHE – responsible for the system at the time, before NHS Test & Trace was set up – didn’t have enough capacity.

It was capable of doing far fewer tests than the hundreds of thousands of people getting infected of coronavirus would have demanded.

As a result, everyone who thought they might have coronavirus was simply instructed to stay at home and wait for it to blow over, or to get medical help if they became seriously ill.

Dr Harries later admitted the UK might have done more testing if it had been able to, saying: ‘If we had unlimited capacity, and the ongoing support beyond that, then we perhaps would choose a slightly different approach.’