It’s not easy to experience other cultures right now, but through a stunning new photography book you can get a beguiling insight into the world’s most colourful communities from the comfort of your own home.

Set against powerful black backdrops, the portraits capture both the historical and contemporary elements of indigenous life around the globe in order to portray ‘cultures and individuals in flux’.

In her introduction to the book, Michi says: ‘Some are dressed exclusively in the traditional garb of their ancestors, while others hold guns or sit astride motorcycles; here we have traditional jewelry and textiles cohabiting with boomboxes, AK-47s, iPhones and keyrings. I have lived among and learned from the way of life of indigenous peoples from the Kalahari to the Arctic tundra. Few people, I think, have been given more opportunities to be humbled by the awe-inspiring variety of the world and its inhabitants, nor to become aware of the wisdom, capacities and value of cultures on which we have historically looked down.’

The title of the book, meanwhile, is intended to be a question as much as a statement.

Michi explains: ‘There’s no denying that in any number of ways the world’s indigenous peoples are acutely vulnerable. But those peoples are not undifferentiated, anonymous masses, mere statistics: they are groups of individuals, and the individuals that appear in these pages are very far from helpless.’ Scroll down for a selection of Michi’s stirring shots… 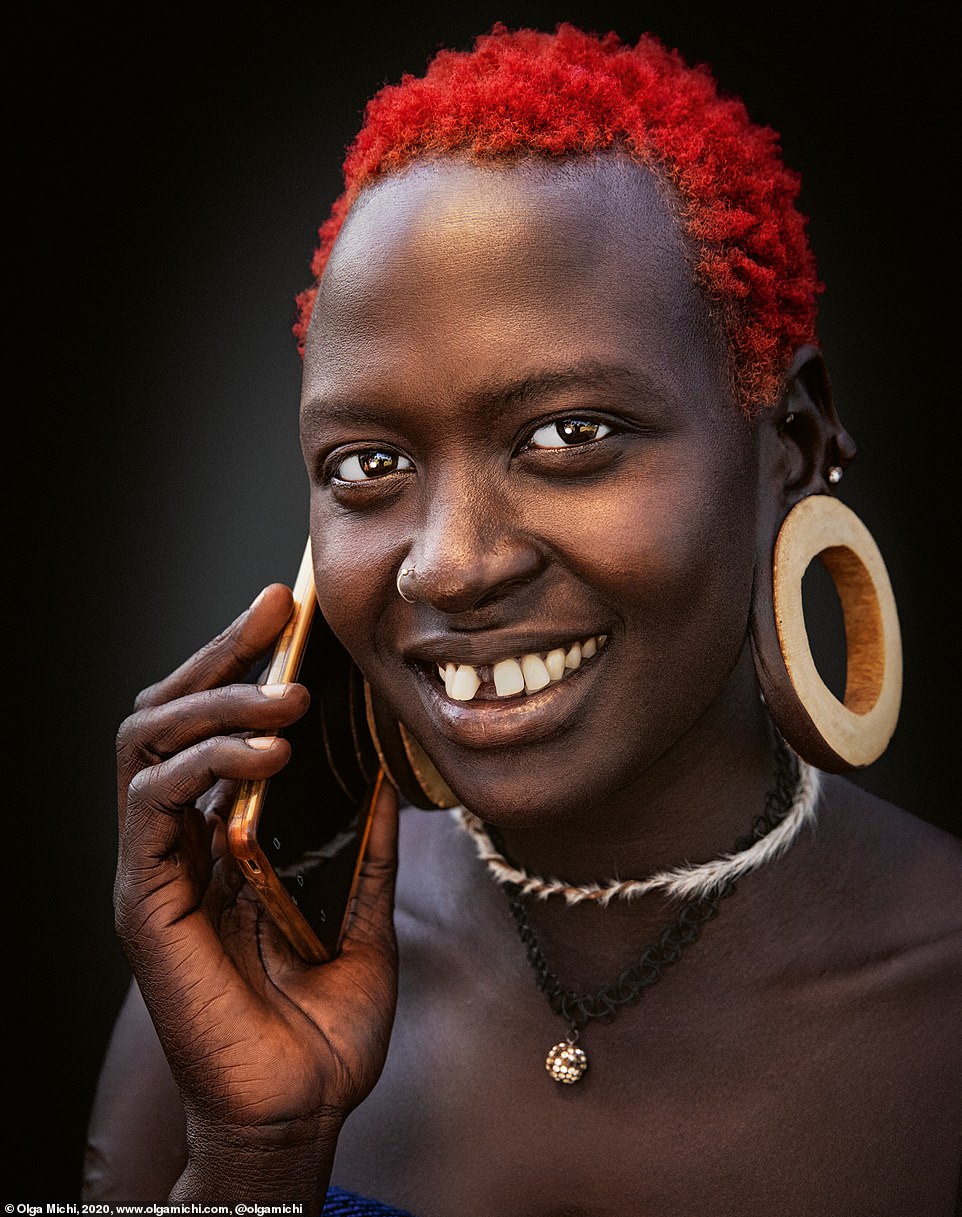 Using her smartphone is as common to this young Mursi woman from south Ethiopia as dying her hair. ‘It makes my friends recognise me at the club,’ she said 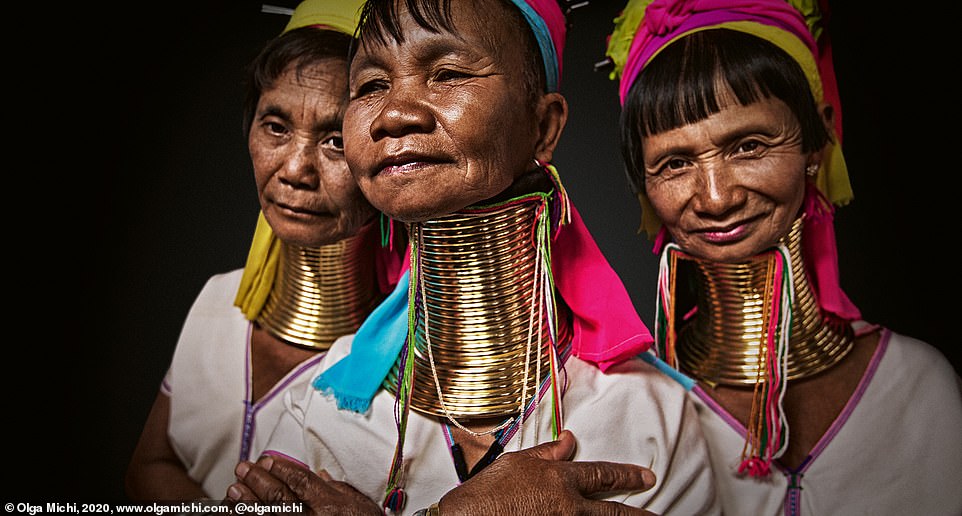 This mesmerising image shows Padaung women, or ‘giraffe women’, from Myanmar, Southeast Asia. The exact date and reason why they began to lengthen their necks with rings is still a mystery. According to legend, the Padaung people are descended from a dragon with an armoured neck More than 100 different ethnic groups reside in Myanmar, formerly Burma, in Southeast Asia. The Chin tribes include around 1.5million people and are divided into 37 groups. Only the older women (pictured) of some Chin tribes wear these filigreed face tattoos. It is only a matter of time before this unique tradition dies out, according to Michi 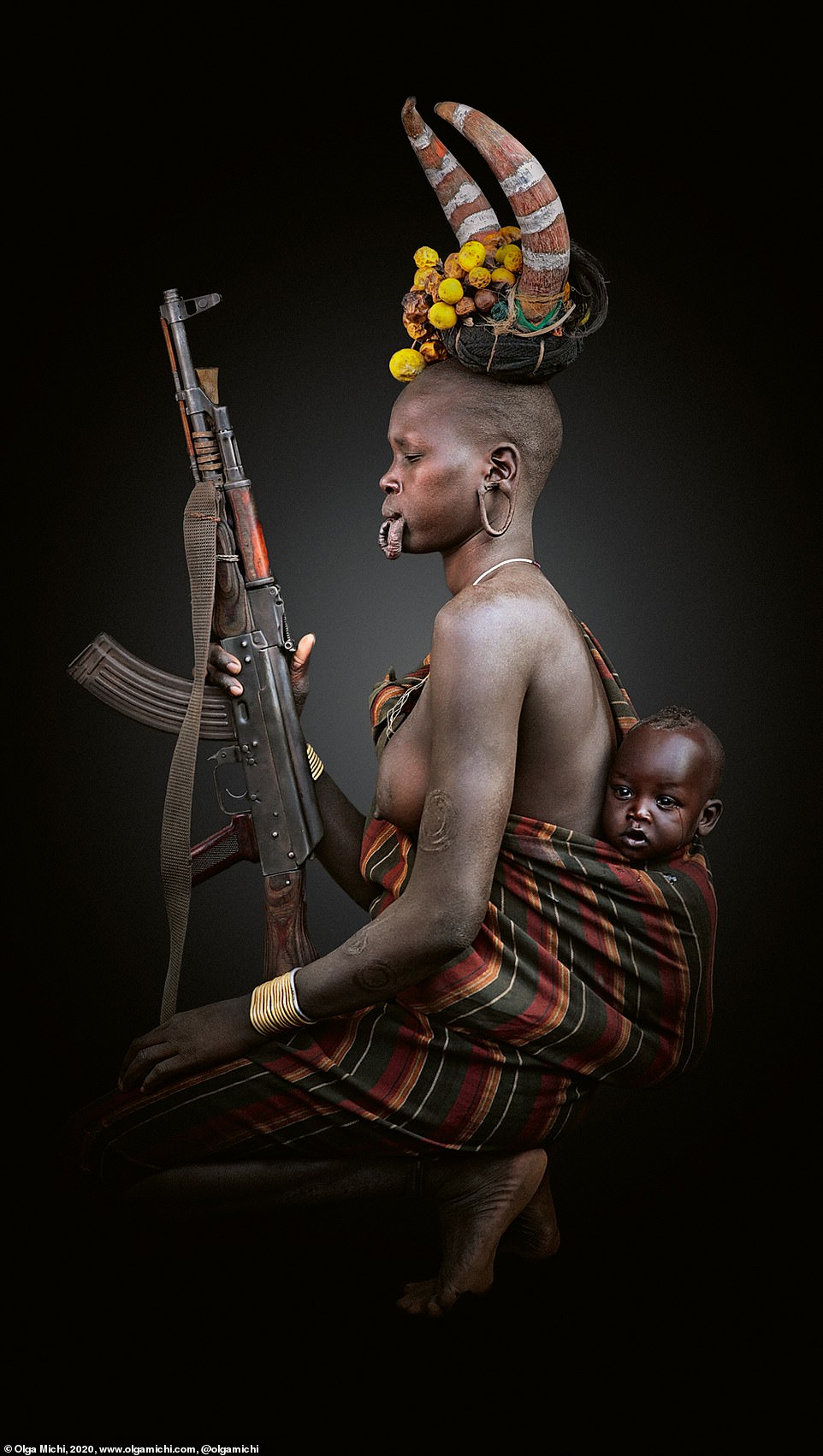 Pictured: A woman of the Mursi ethnic group in Ethiopia in traditional clothing with her child – and holding an AK-47. The automatic Kalashnikov rifle illegally spread to conflict zones of Africa in bulk after the collapse of the Soviet Union 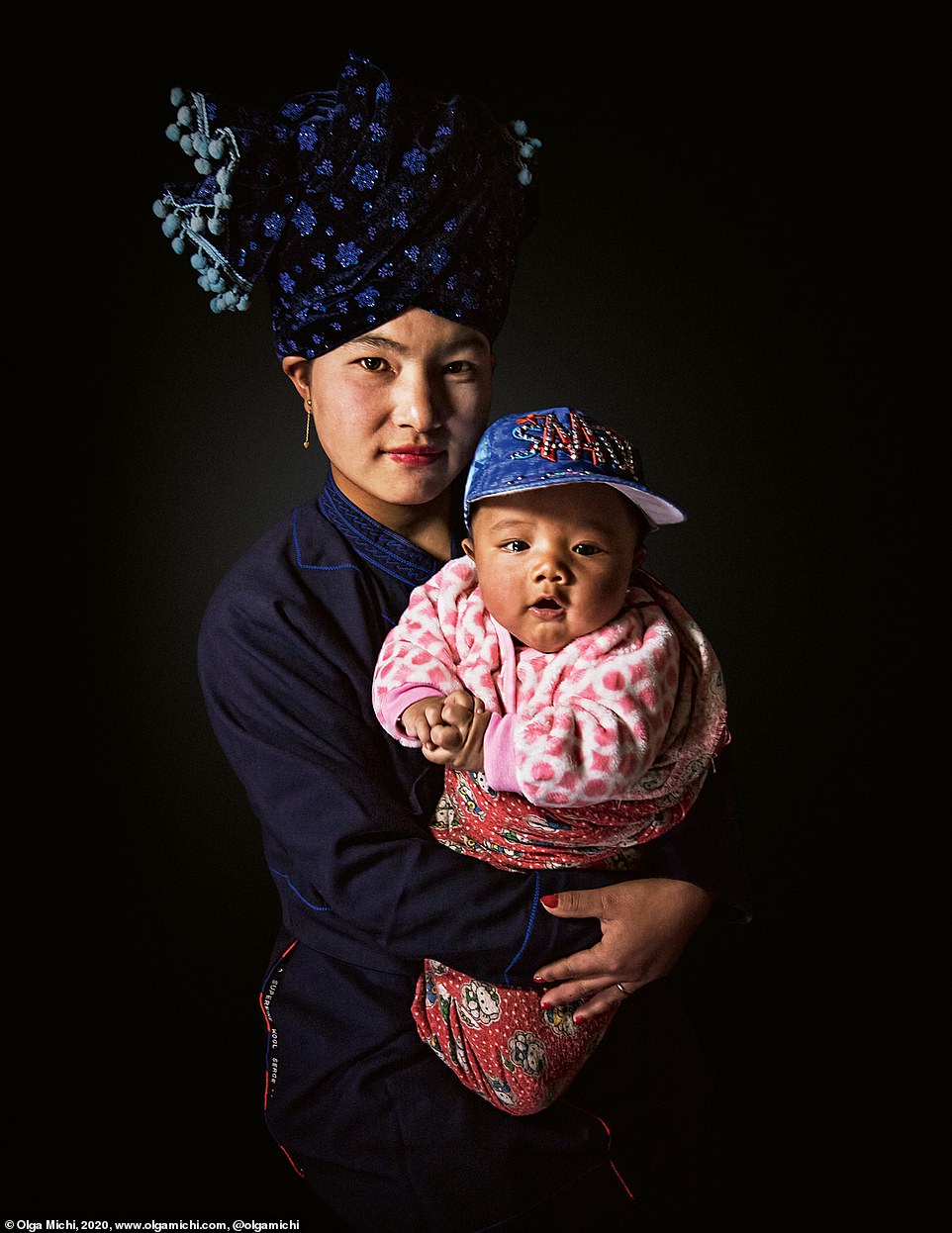 In this photo, traditional fashion meets more modern-day trends. A woman of the Tibeto-Burman Lisu ethnic group, who also reside in southwest China, is pictured with her child 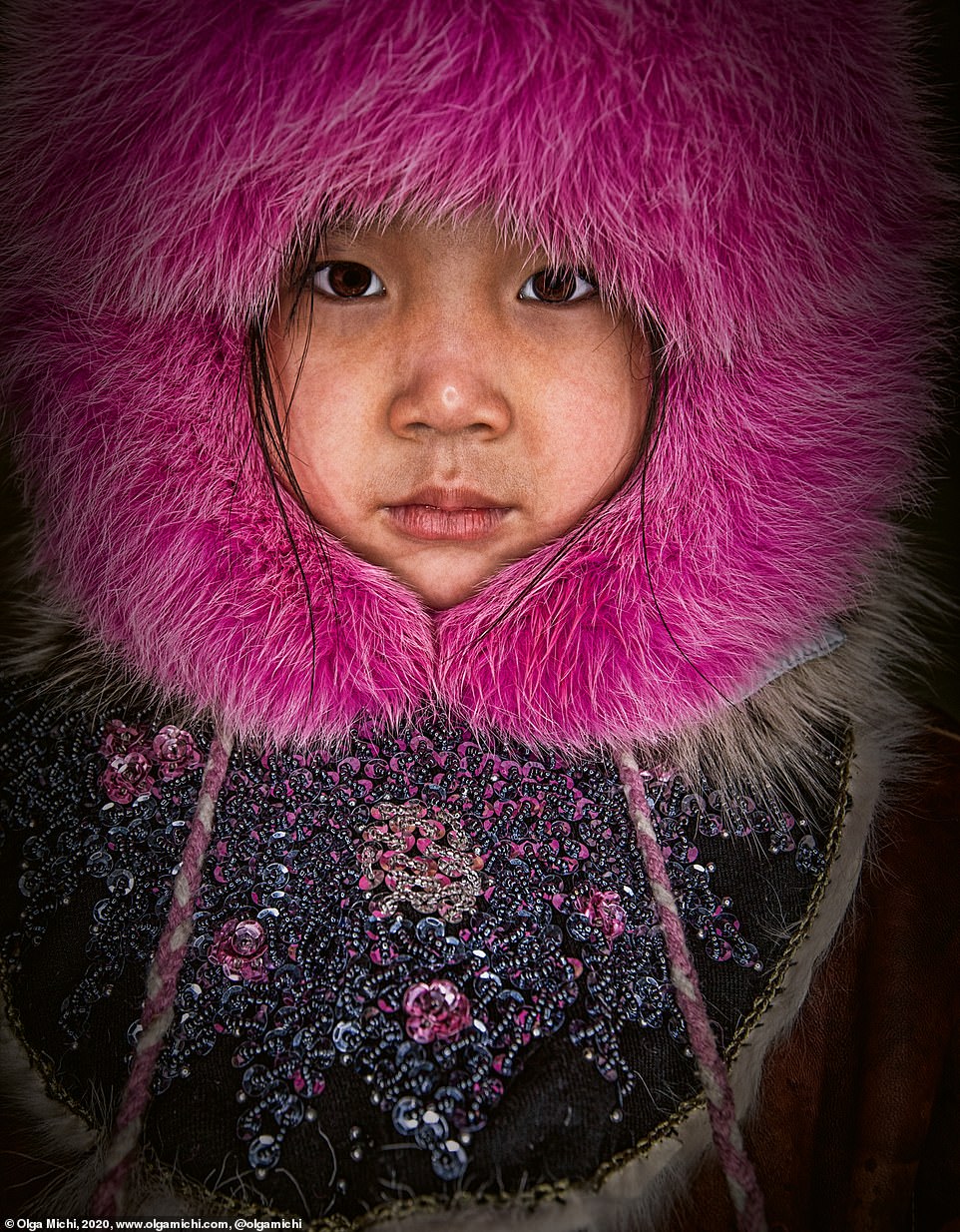 Pictured is a young girl from the Chukchi people. According to Michi, Chukchi could be aptly translated into English as ‘genuine people’. This indigenous group, which has about 15,000 members, lives in the extreme northeast of Russia 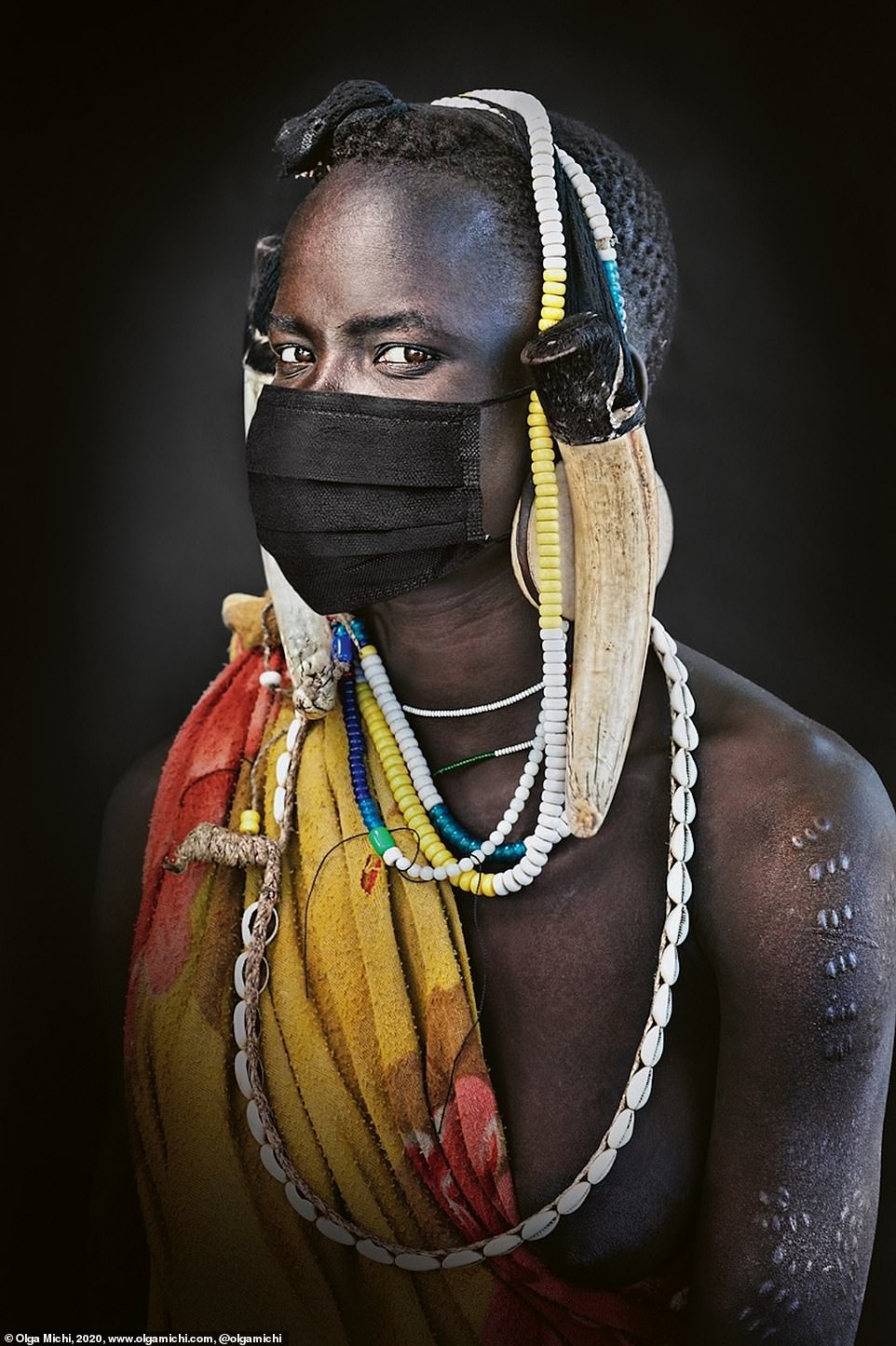 The Covid-19 pandemic knows no borders. This man of the Mursi people wears his mask as proudly and confidently as his ordinary adornments 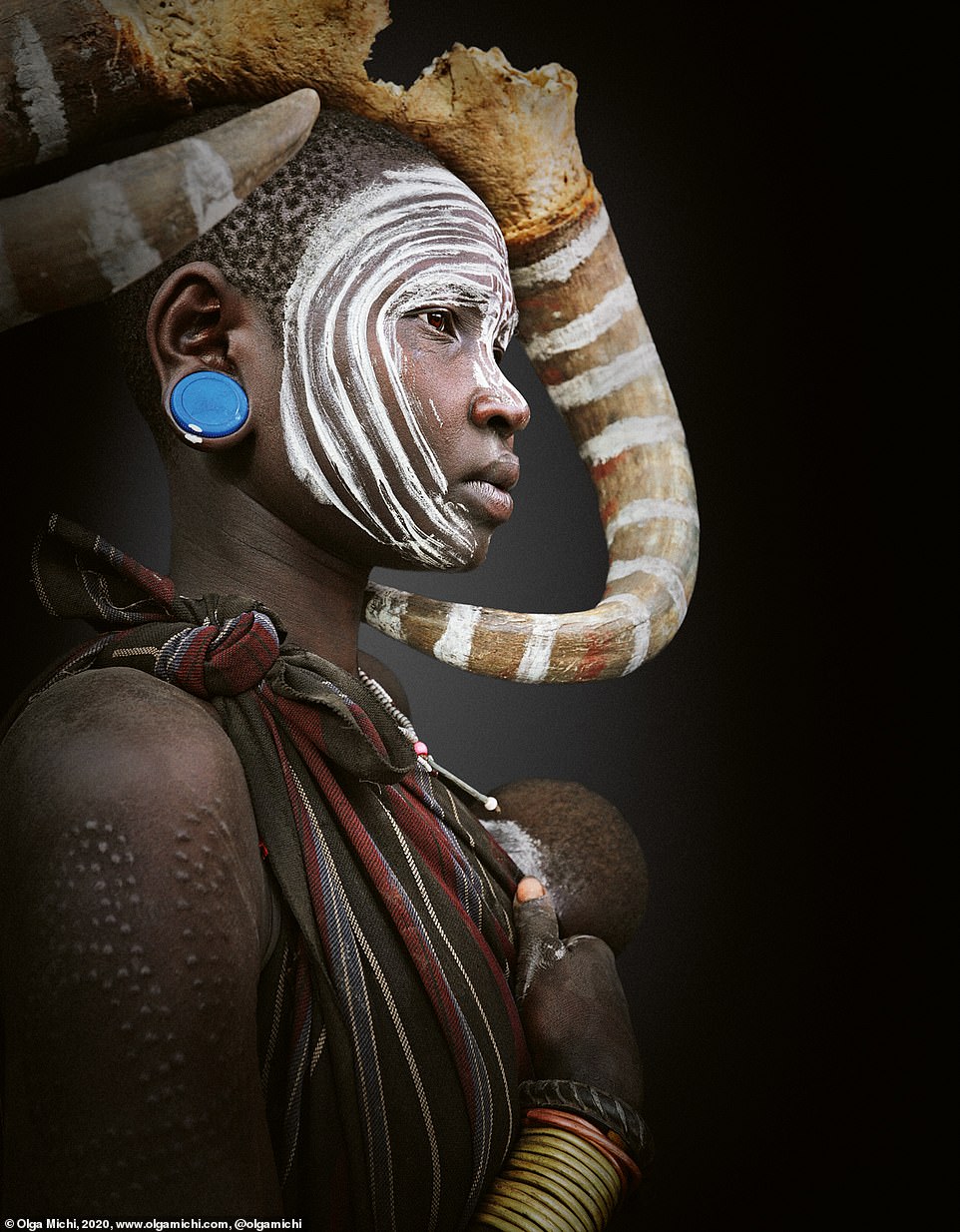 Cattle breeding is one of the most important sources of life and survival for the Mursi and Surma people in Ethiopia. The cattle horns that many women wear, including the woman pictured, are not only decorative, but also reflect the tribesʼ attitude towards their animals. In the past, the horns were also used as currency Dress-up is a favourite game of children all around the world. These boys of the Surma ethnic group in southern Ethiopia wanted to be photographed by Olga Michi multiple times. They disguised themselves so well, so colourfully and imaginatively, that Olga did not recognise them at first in their new costumes and gladly took their photo again The mobile tent homes of the Chukchi, who live in the extreme northeast of Russia, are called yarangas. These traditional dwellings are made of 35-40 reindeer hides. The difficult set-up process, which often takes hours, is a task reserved for the women 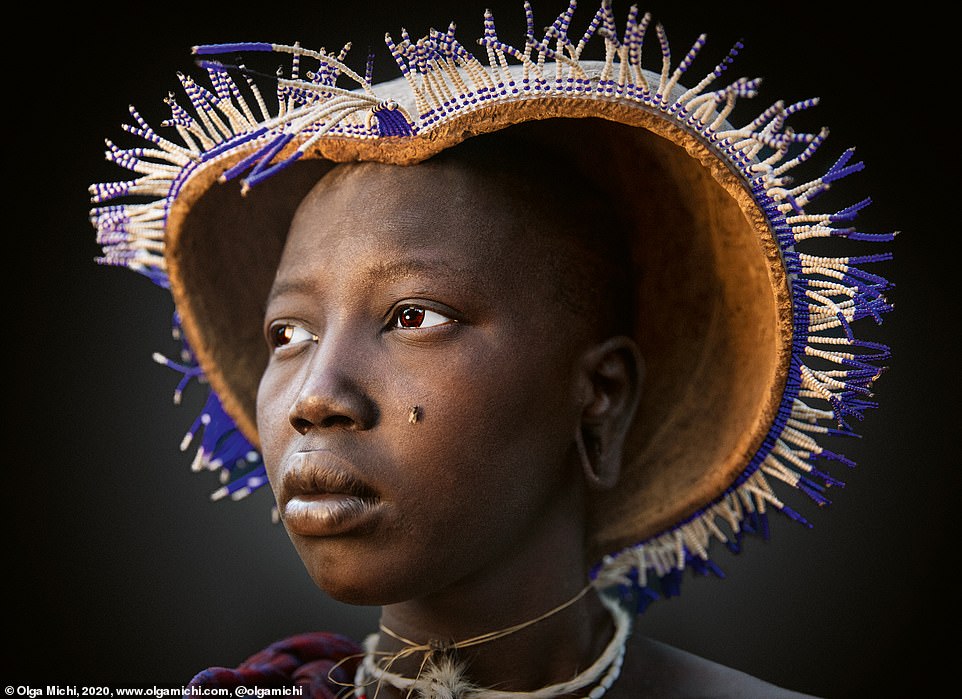 A kaleidoscope of humanity: In this image, present-day East Africa meets the European fashion of the 18th century. The fly on the face of this Mursi woman is said to be reminiscent of the beauty patches popular at the time, especially in France, where they were known as mouches 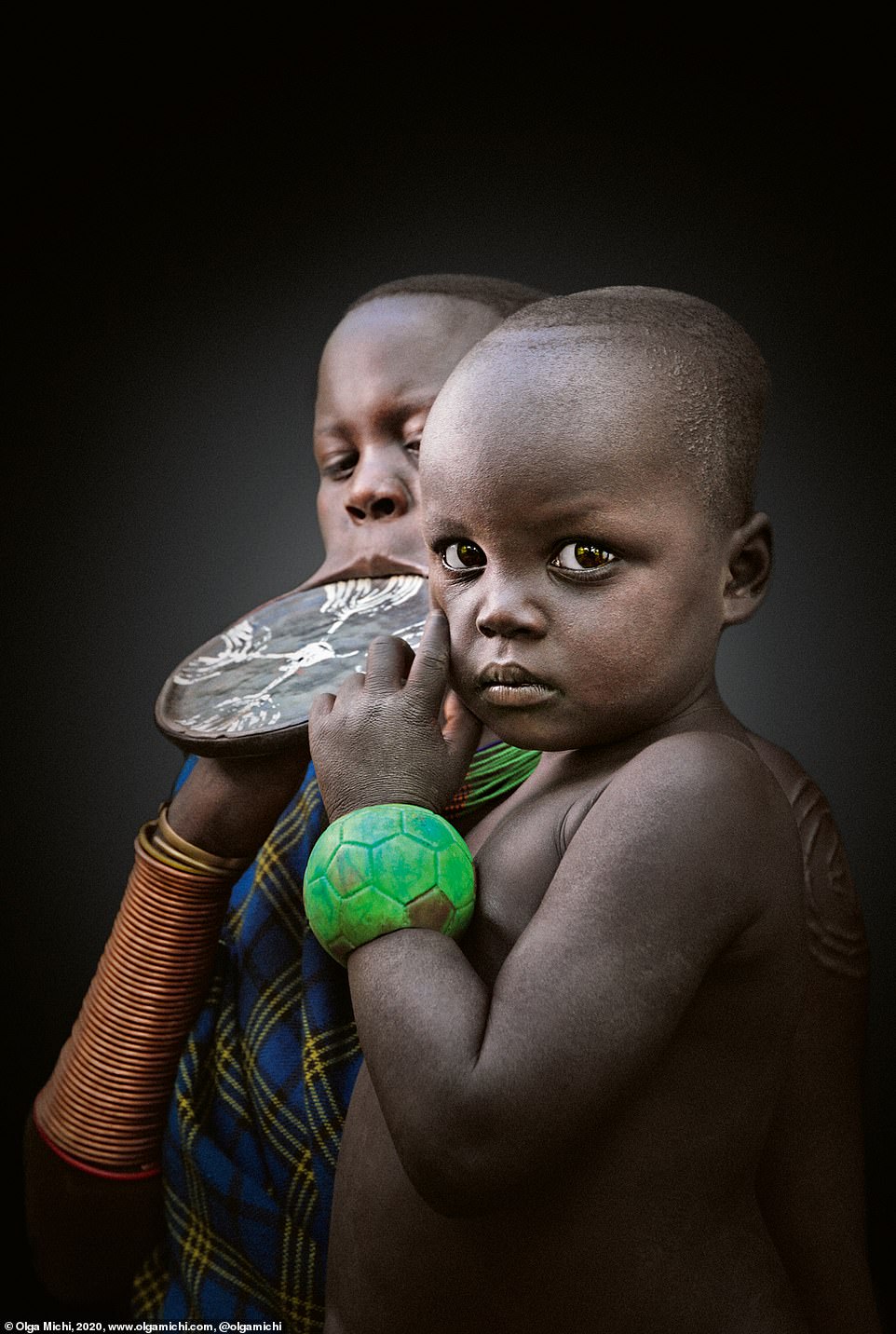 In the culture of the Mursi, an ethnic group in the Omo Valley of Ethiopia, jewellery is highly valued since it visibly reflects the talent, effort, and creativity of the wearer. The insertion of the lip plate is a rite of passage. The size of the plate is said to determine the bride price upon marriage