The Biden Administration has completed its security review of Russia following a series of efforts counter to U.S. interests – with potential new sanctions being prepared for close associates of Russian President Vladimir Putin.

Biden ordered the review on his first day in office, and the White House has said it would focus on four problematic areas – among them Russian election interference and the Solarwinds hack of U.S. government agencies and companies whose extent is still being understood.

With the review’s completion, Bloomberg News reported, the administration could impose additional sanctions or even expel Russian intelligence officers it has identified. 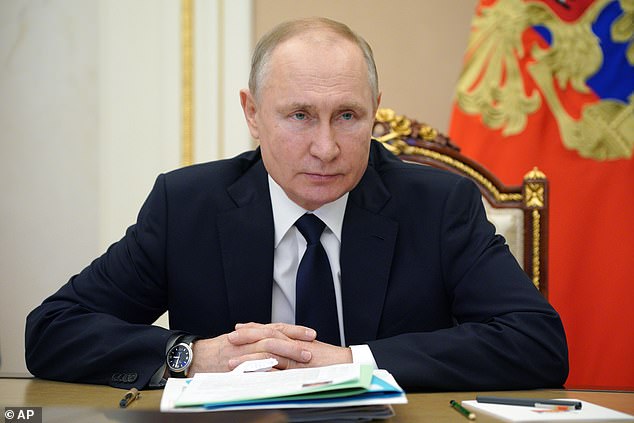 Russian President Vladimir Putin attends a meeting via video conference in the Kremlin in Moscow, Russia, Wednesday, April 7, 2021. The Biden administration has reportedly completed its security review, and new sanctions are a possibility

The U.S. slapped sanctions on Russia and kicked closed Russian security compounds in the final days of the Obama administration in response to Russian election interference in the 2016 presidential election.

Possible moves could involve sanctions and the expulsion of Russian intelligence officers in the U.S. under diplomatic cover, said the people, who asked not to be identified discussing private deliberations. Senior officials were expected to meet Wednesday to discuss what steps to take.

The sanctions could include efforts to single out people close to Russian President Vladimir Putin and agencies ‘linked to election interference,’ according to the report, although that has proven difficult in the past.

According to a White House spokesperson, ‘We are not going to comment on internal policy conversations or meetings. From his first phone call with President Putin, President Biden has been clear that the United States will respond to a number of destabilizing Russian actions, in a manner and timing of our choosing.’ 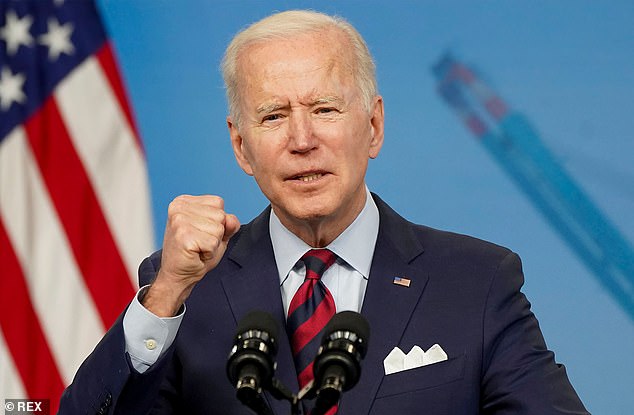 The Director of National Intelligence, in a report released last month, assessed that Putin authorized ‘influence operations’ to denigrate Joe Biden when he was running for president. Biden ordered the review when he took office 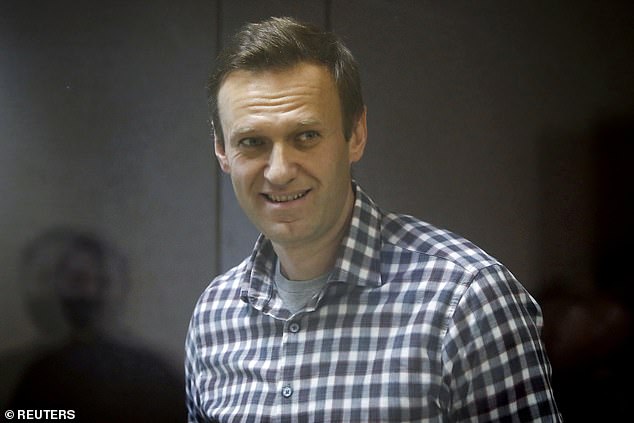 Many top Russian officials and oligarchs have already made money moves to avoid the impact of U.S. sanctions, and the U.S. already slapped sanctions as well as indictments on Russian individuals and entities linked to election hacking.

Putin last month gave his backing to a constitutional amendment allowing him to remain in office until 2036.

The administration’s review focused on hacking, election interference, reports Russia offered ‘bounties’ for the killing of U.S. troops in Afghanistan, and the poisoning of Russian opposition leader Alexei Navalny.

Navalny is on a hunger strike. He was detained upon returning to Russia in January after fleeing the country to Germany after he was poisoned with the chemical agent Novichok.  Amnesty International said Russian authorities may be slowly killing Navalny in prison under conditions that amount to torture.

‘We urge Russian authorities to take all necessary actions to ensure his safety and health. So long as he is imprisoned, the Russian government is responsible for his health and well-being,’ Psaki said.

‘We stand with like-minded allies and partners in calling for his immediate release as well as an end to the persecution of his supporters,’ she said, calling his imprisonment ‘politically motivated.

The Director of National Intelligence, in a report released last month, assessed that Putin authorized ‘influence operations’ to denigrate Joe Biden when he was running for president.

The U.S. and Russia had yet another diplomatic spat after Biden said he considered Putin a ‘killer’ when asked by ABC’s George Stephanopoulos. Nevertheless, Putin plans to attend Biden’s virtual climate summit this month.