Bank of England’s Epstein alert on Barclays chief – two years ago: Chairman grilled over Staley’s links to paedophile that would lead to downfall 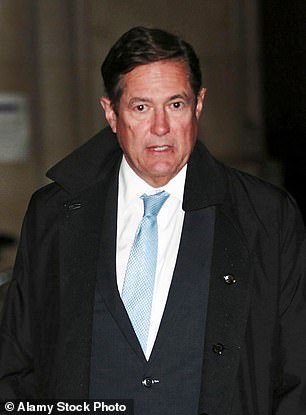 Quit: Jes Staley stepped down after seeing the findings of the inquiry

The Governor of the Bank of England summoned the chairman of Barclays to grill him about the links between the lender’s then chief executive, Jes Staley, and the sex offender Jeffrey Epstein, The Mail on Sunday can reveal.

The meeting in 2019 was convened due to concerns that Nigel Higgins may have understated the extent of Staley’s relationship with Epstein in a letter he had sent to regulators.

The existence of the letter has remained secret until now.

Higgins, who is still in the chair at Barclays, was grilled by the then governor Mark Carney and Andrew Bailey, who was chief executive of the Financial Conduct Authority at the time, but has since taken the top job at the Bank.

It is highly unusual for the governor to haul up a bank chairman for questioning over the conduct of a chief executive – indicating the extent of the Bank’s disquiet.

Carney stopped short of telling Higgins to oust Staley. However, a source said he ‘gave [Higgins] the very clear impression the board would want to consider the position of their chief executive officer’.

Staley only resigned in November last year after an investigation by City watchdogs into how he characterised his relationship with the disgraced financier Epstein.

Higgins’s meeting with Bank of England chiefs took place almost two years earlier in December 2019. It is understood Higgins’s letter was written just weeks after the death of Epstein in jail.

The missive is understood to have vouched that there was nothing improper in the relationship between Staley and Epstein and to have triggered the probe by regulators that eventually led to his departure from the bank. The revelations will put a spotlight on judgments made by the Barclays board almost two years before Staley’s departure. Epstein had been a client of Staley’s when the latter was a private banker at JPMorgan. He left the bank in 2013.

Staley visited Epstein on his private island in the Caribbean on a sailing trip with his wife in 2015 – just months before taking charge of the high street bank.

The investigation into Staley, 65, first became public in early 2020, at which point the board said it had ‘full confidence’ in him.

He stepped down four months ago upon seeing the findings of the inquiry which are not yet public.

Staley has always insisted he had a purely professional relationship with Epstein. He intends to contest the conclusions of the probe.

He said in 2020, ‘with hindsight, with what we know now, I deeply regret having any relationship with Jeffrey Epstein’, but added that he had been ‘very transparent’.

Barclays said: ‘It should be noted the investigation makes no findings that Mr Staley saw, or was aware of, any of Mr Epstein’s alleged crimes, which was the central question underpinning Barclays’ support for Mr Staley following the arrest of Mr Epstein in summer 2019.’

The Bank of England and the FCA declined to comment.