A banker who was found drunk at the wheel of her luxury Jaguar has escaped a road ban after arguing she was only there to text a friend.

Julie Platt, 52, tested more than twice the alcohol limit whilst sat in the driver’s seat of her stationary car outside her apartment in Cheadle Hulme, Stockport.

The mother of one, who works as an advisor for the Spanish banking giant Santander in Didsbury, Manchester was angrily texting a pal who owed her money.

She had earlier visited the friend’s house to post a letter about the £2,000 loan repayment before attending a funeral.

Following the wake and after downing a bottle of red wine at home, she claims she returned to the car to text because the wi-fi reception inside her flat was poor.

The mother of one claims she only went to her car to text, despite the car engine being warm when police discovered her

Police told the court the engine was warm after they discovered her sat at the wheel following a tip-off on December 3 2019, at 12:25am.

She was found guilty of being drunk in charge of a car and was given ten points on her licence at Tameside Magistrates Court but did not have her licence taken away.

PC Andrew Bennett told the hearing: ‘She was on her mobile phone. She wasn’t speaking on it but tapping on it.

‘At the time there were no lights on the vehicle and the engine wasn’t running. I asked if she had driven the car but she replied she had only just come out at the address two minutes earlier.

‘She explained that she had been having a text conversation with a friend and showed me the messages to substantiate the fact that she was having that conversation.

‘But a text message at 12.30am from ‘Sue’ stated: ‘I never expected you to turn up at that address.’

‘I asked who Sue was and she said it was the sister of a friend who lived about a mile and a half from the address.

‘She was intoxicated. Her eyes were glazed, she was slurring her words and swaying when she got out of the vehicle.

‘Two other officers also attended and one placed a hand on the bonnet and said, ‘Well, the engine’s warm.’

‘I asked if she had any keys for the vehicle but she said she did not have any keys. I did a search and found a set of key fobs on the front passenger seat.’

Tests showed Ms Platt had 75 micrograms of alcohol in 100 millilitres of breath. The legal limit is 35mg.

She admitted drinking a bottle of red wine when quizzed at the scene but later gave no comment in police interview.

She denied wrongdoing and told the court: ‘I had been attending a funeral and later attended a friend’s home and posted a letter about a sum of money that was owed to me.

‘I lent her some money a year previously and she was giving it back in small amounts of £50 here and there but wasn’t paying me back in full. 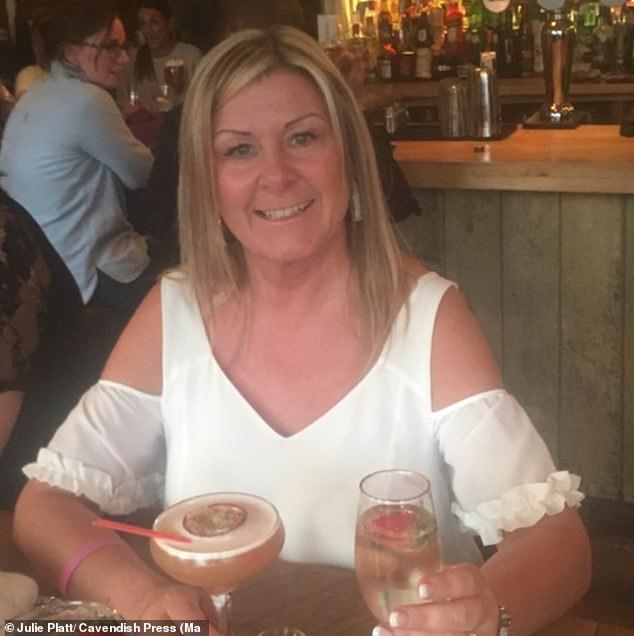 Julie Platt, 52, from Cheadle, Stockport, was found guilty of being drunk in charge of a car and received ten points on her licence

‘En route to the funeral, I asked if she could speak to family or someone who could pay the outstanding amount of £2000 and I just said, ‘it’s taking longer, and I need the money back’.

‘Then I went to the funeral and wake of my dad’s close friend who had died.

‘There was a carvery roast dinner and I was talking to people about memories and I drank water and pots of tea all day before having one gin and tonic to raise a toast.

‘I left around 9.30pm drove home, and I got a bottle of wine and drank it while looking at photos and reminiscing.

‘The signal is not particularly good in that flat so I went downstairs and I went to the car. I then sat in the vehicle and read the messages.

‘Because the signal was clear, I started receiving text messages about the money that was outstanding.

‘She didn’t have the money and It was just a bit of text war really and I felt she was taking liberties. I said I leant her the money in good faith and I wanted the money back.

‘I was probably in the car five minutes before the police arrived. He said: ‘What have you had to drink’ and I said ‘a bottle of wine’ and showed him the texts.

‘I had had a drink and I had not driven the car. I was just sat in my car on private land. I wasn’t doing any harm.

Her lawyer Gavin Clark told the hearing: ‘She was frank she has been drinking and there are the text messages to and fro showing the argument she had been having with a friend.

‘She had absolutely no intention of diving the vehicle that evening.’

Judge Paul Hughes told her: ‘The main facts that are not in dispute are that you were found sitting in your car with the engine off.

‘You admitted that you’d had a bottle of wine and previously, a gin and tonic, and you were using a mobile phone while sitting in the driver’s seat.

‘On being tested, you were over the limit, and you offered no comment in the interview on legal advice.

‘However, we have found that you have not shown there was no likelihood of you driving.’