A massive Droughtmaster bull has been named Australia’s biggest bull at the Rockhamption Beef Australia event in Queensland.

Banjo the bull weighs in at a whopping 1,140kg and hails from Theodore, about 200km south west of Rockhampton.

Big Moo, formally one of Australia’s largest steers, died in June 2020 while the renowned Knickers weighs in at 1,400kg – but is also a steer, not a bull.

Steers are castrated male cattle raised for beef, while bulls are used for breeding. 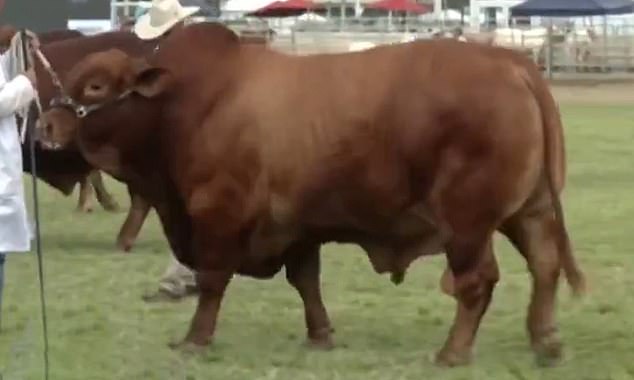 Banjo (pictured) was named Australia’s largest bull, weighing in at a whopping 1,140kg

Banjo was officially recognised on Wednesday as Australia’s biggest bull, with the acknowledgement ensuring that Queensland was named as the nation’s bull capital.

Despite being smaller than both Big Moo and Knickers, they are both steers which explains why Banjo was acknowledged as Australia’s biggest bull.

They are often red, have large ears and a medium hump.

The Beef Australia event runs in Rockhampton between May 2-8 and hosts a number of Australian musicians such as Brad Cox.