NSW is bracing for three days of heavy rain and a renewed risk of flooding as parts of Queensland copped hailstones the size of golf balls.

The Bureau of Meteorology said an east coast low will bring a raised risk of flooding to the Hawkesbury-Nepean region west of Sydney from Sunday until Tuesday – with the weather set to ease from Wednesday.

A BoM warning for intense and heavy rain covers the entire coast from Coffs Harbour in the north to Bega in the south.

Six-hourly rainfall totals between 70mm to 120mm are possible on the east coast on Monday. 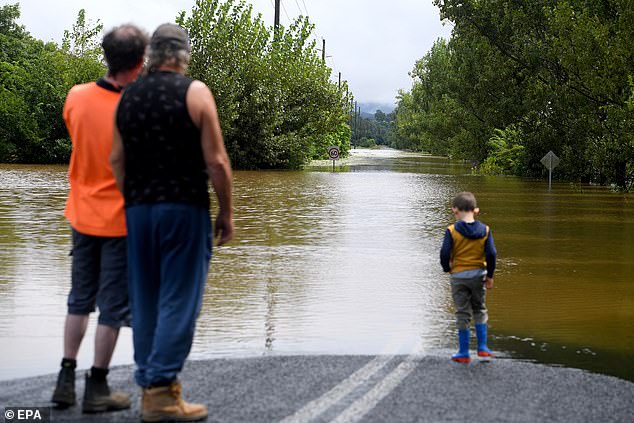 People look at a road cut off by floodwater at Richmond, north west of Sydney on March 3 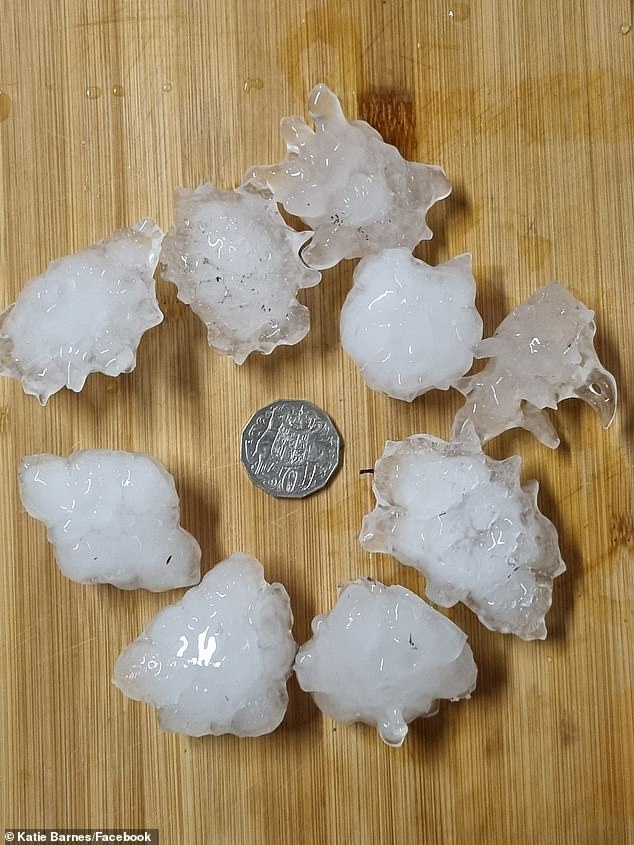 Flood levels have already risen again at North Richmond on the banks of the Lower Nepean River after a heavy deluge on Sunday.

The Bureau of Meteorology has also issued flood warnings in NSW for the Wollombi Brook, Hawkesbury-Nepean, Colo and Weir rivers.

The Northern Rivers region – including flood-stricken Lismore where two out of three homes will need to be rebuilt or demolished – is forecast to see heavy to intense rainfall and possibly damaging winds and hail.

‘We’re certainly on high alert from the Mid-North Coast down into the Shoalhaven,’ he told the Nine Network on Monday. 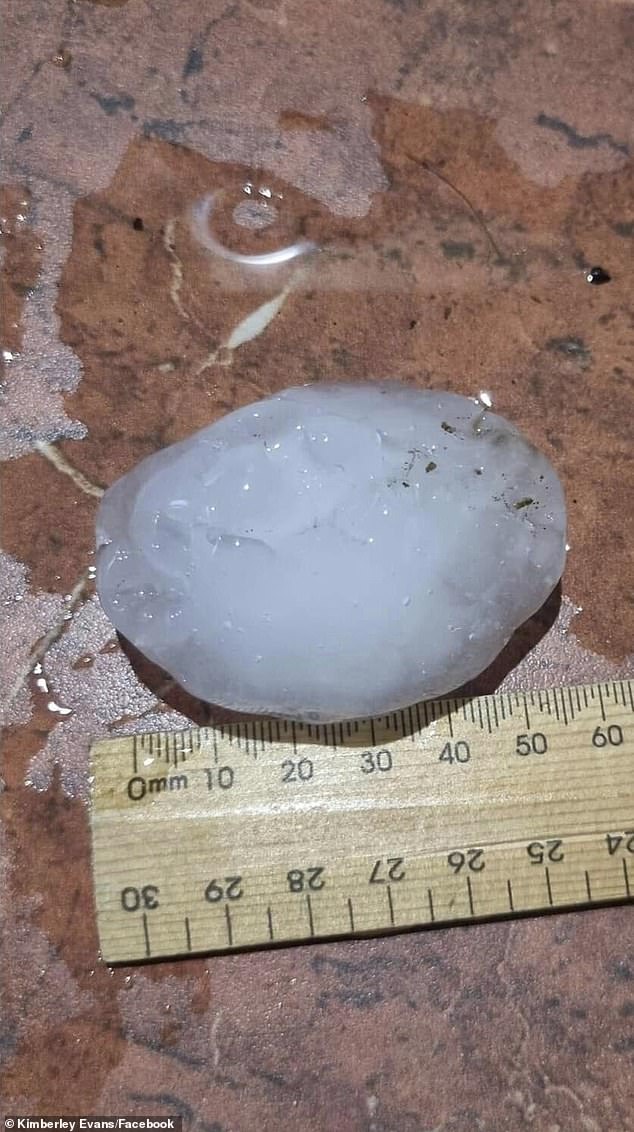 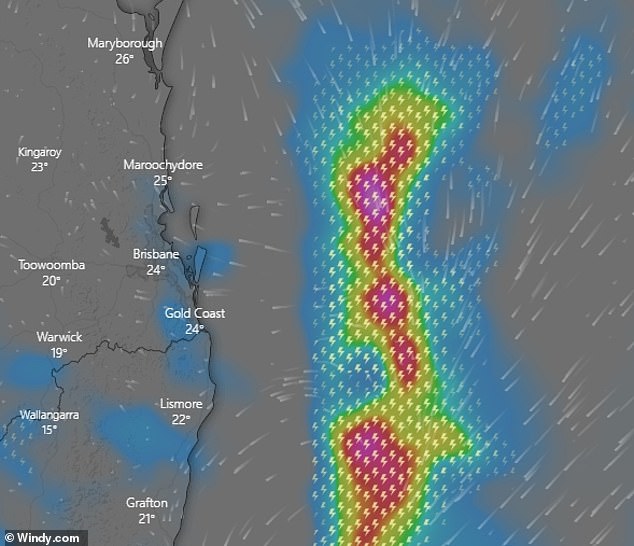 ‘I would expect throughout today that you will see another batch of warnings and evacuation orders potentially for a number of catchments.

‘We are watching exceptionally closely a number of catchments that are going to come very close to, potentially, tops of levees … around the Hawkesbury and Central Coast and places.

Commuters are being advised trains will run to a changed timetable and to allow extra travel time and avoid non-essential travel.

Drivers are also being told to avoid non-essential travel on the roads.

Queensland’s flood death toll meanwhile rose to 12 on Monday after as a man’s body was recovered from his car after it was swept off a flooded road in the South Burnett region.

A woman, who was in the car, miraculously survived after escaping the car and clinging to a tree as at two fierce supercell storms lashed the state’s south-east.

Residents south of Brisbane shared photos of giant hailstones landing on their homes as a storm system passed over Logan, Ipswich and the Sunshine Coast on Sunday afternoon.

The state’s flood alerts are for the Brisbane and Bremer rivers along with Warrill, Lockyer and Laidley creeks, just a week after the waterways overflowed and caused widespread devastation. 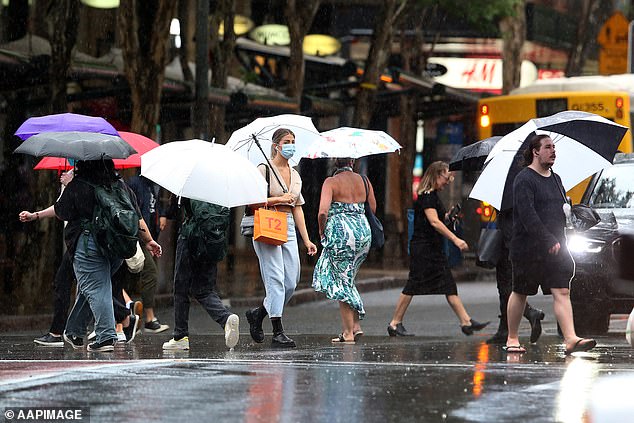 Brisbane (pictured) will be hot with more wild weather on Sunday night with up to 50mm of rain forecast, along with damaging winds, hail and heavy rain which may lead to flash flooding

All but six state schools in South East Queensland will reopen on Monday.

The schools that will remain closed are:

There were reports of a tornado and large hailstones near Rockhampton in central Queensland.

Brisbane and Moreton Bay weren’t spared from the wild weather either after almost 3,000 homes and businesses lost power.

The city was expected to cop another soaking of up to 50mm on Sunday night.

A minor flood warning has been issued for the Brisbane River, just days after it rose to levels just below the 2011 flood peak of 4.46m.

‘The catchment is saturated and is likely to respond quickly to rainfall, with renewed small river level rises and some minor flooding in Brisbane River tributaries possible from late Sunday,’ BOM warned.

‘Renewed rises are likely with thunderstorms especially in the smaller creeks and tributaries as catchments remain saturated.’

It comes after four cars were destroyed by giant hailstones on the Sunshine Coast on Thursday night, just days after floods devastated the region.

The massive clean up has only just started for Queensland residents whose livelihoods were destroyed by the floods. 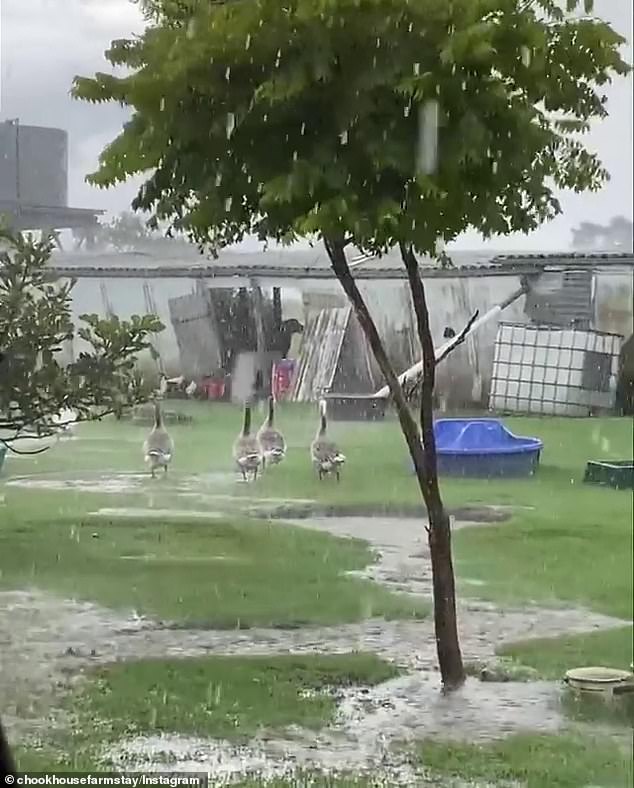 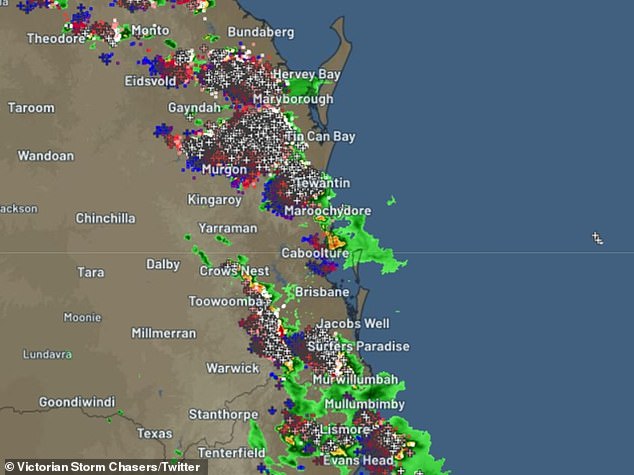 They have a long road to recovery ahead of them with the damage bill already past the $1 billion mark.

Communities near Ipswich and Gympie west of Brisbane remain cut off more than a week after the floods with 140 stranded residents still in evacuation centres, unable to return home.

‘This has really packed a punch, these floods have had a big impact on people and it’s going to take not just weeks but months for people to recover,’ Premier Annastacia Palaszczuk told reporters on Sunday 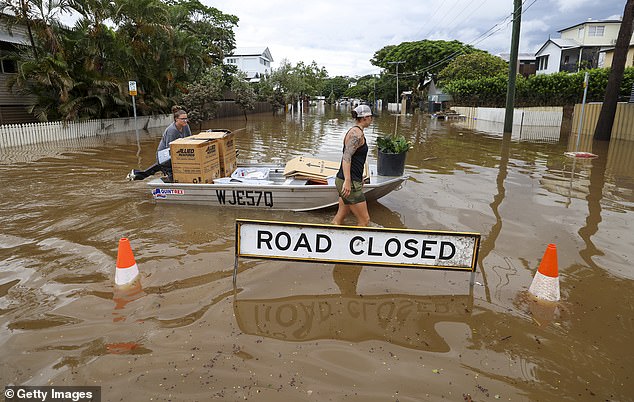 Another flood warning has been issued for the Brisbane, a week after floods cut off dozens of suburbs (pictured flooding in inner-city Auchenflower) 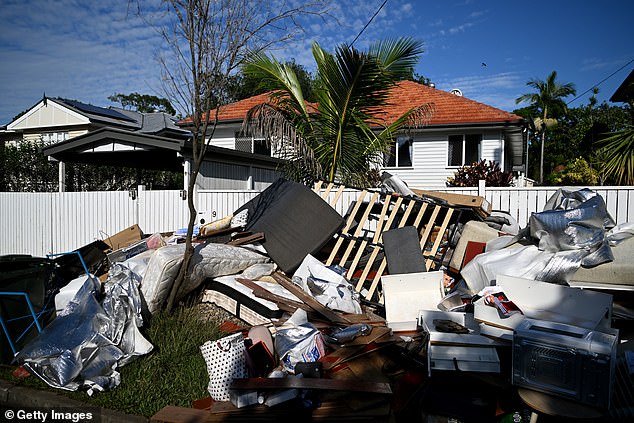