Britons under 40 will be offered an alternative to the Oxford/AstraZeneca Covid jab after it was linked to potentially fatal blood clots, it was claimed last night.

Advisers are understood to have written to Health Secretary Matt Hancock suggesting the move after more adults suffered side effects.

The experts believe the risk of clotting now outweighs that of Covid in younger adults. 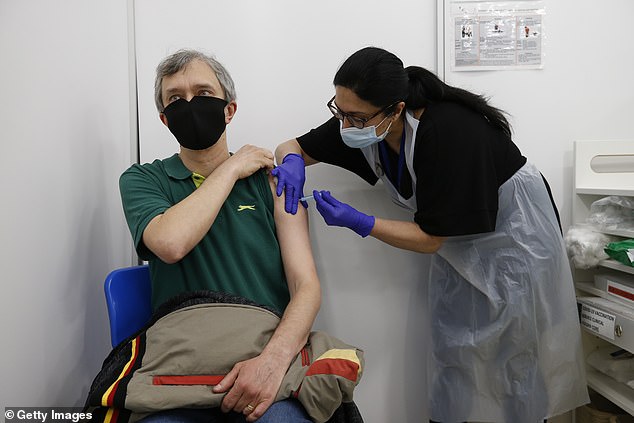 Britons under 40 will be offered an alternative to the Oxford/AstraZeneca Covid jab after it was linked to potentially fatal blood clots, it was claimed last night. Pictured: Fabian Cassar, 47, receives an AstraZeneca vaccination in London on April 16

They previously recommended that those under 30 with no underlying health conditions should be offered an alternative, such as the Pfizer or Moderna jabs.

But this age is expected to be increased to 40, with the decision announced today, the Independent reported.

The UK is understood to have enough supplies of alternative vaccines to offer all adults a first dose by the Government’s July 31 target.

The source said: ‘Because prevalence of Covid is low and given the strength of the programme, that means we’re in a position to act with an abundance of caution and offer a different vaccine to the younger groups.’

The Joint Committee on Vaccination and Immunisation (JCVI) has been analysing the data and drafted its recommendation earlier this week.

The latest figures from the Medicines and Healthcare products Regulatory Agency (MHRA) show there have been 10.5 cases of blood clots combined with low platelet counts per million doses. 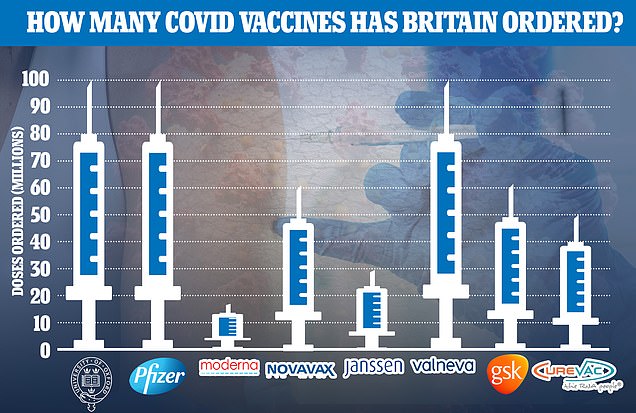 There have been 242 cases of the rare clotting disorder following the Oxford jab up to April 28, with more than 28million doses now administered.

The weekly total is down 10 per cent. Cases have fallen across all regions except the North West.

The Indian strain of Covid is likely to be declared a ‘variant of concern’ after more than 40 clusters were reportedly found across England.

Only SIX out of 6million Britons given AstraZeneca’s Covid jab have suffered blood clots after their second dose, official data shows

Only one in a million Britons given AstraZeneca’s coronavirus vaccine suffer the rare blood clotting disorder after getting their second dose, official data showed today.

It appears to be far less common after the second dose than the first, with 242 cases detected in the 22.6m people given one shot, a rate of about one in 100,000.

Until now experts thought the rare disorder – believed to be an overreaction by the immune system to the jab – was exclusively happening in the first dose group.

But the absolute risk of the condition is still tiny. For comparison, an estimated six out of 10,000 women suffer serious blood clots from taking birth control every year.

Forty-nine Britons given a first dose of the AstraZeneca vaccine died as a result of the clotting disorders. It’s unclear if any patients given two doses have passed away.

Analysis published yesterday found people are three times more likely to die if they have not had the vaccine.

The six new cases after a second dose were revealed in the UK Medicines & Healthcare products Regulatory Agency’s weekly report. It includes data up to April 28.

MHRA officials said that despite the update, ‘the advice remains that the benefits of the vaccine outweigh the risks in the majority of people’. 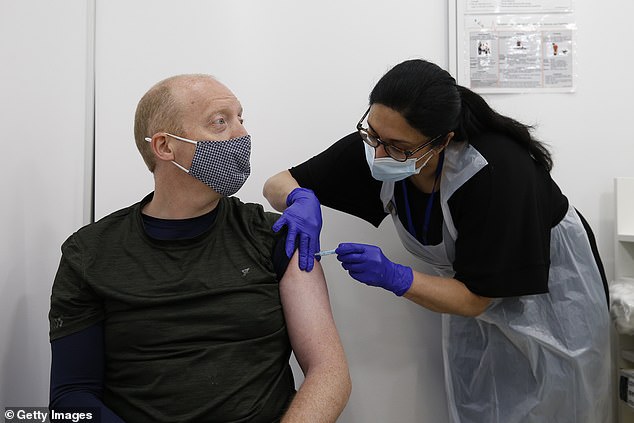 The British vaccine was first linked to the rare blood clots in March, and several European countries including Denmark and Norway, went against World Health Organization advice and halted their rollouts amid concerns over the risks.

The UK medicines regulator has recommended that adults under 30 should be offered an alternative to the vaccine – such as the Pfizer or Moderna jabs – out of an abundance of caution.

For every other age group the benefit of being vaccinated against Covid is deemed far superior to the risk of the jab itself.

It comes after a major analysis in Denmark and Norway found the risk of blood clots after the AstraZeneca jab is ‘small’ with people three times more likely to die if they have not had the vaccine.

Researchers looked at the nationwide rates of blood clots and related conditions in 280,000 people who had had the jab between February and March this year.

They found slightly increased rates of vein blood clots including clots in the veins of the brain, compared with expected rates in the general population.

However, the researchers stress that the risk of such adverse events was low while those who were unvaccinated were almost three times more likely to die than those who had it.

Using national health records, researchers identified rates of events, such as heart attacks, strokes, deep vein blood clots and bleeding events within 28 days of receiving a first vaccine dose and compared these with expected rates in the general populations of Denmark and Norway.

The team of researchers compared data on 281,264 people – about four fifths were women – and compared this with data from the general population.

The researchers found 59 blood clots in the veins compared with 30 expected in the general population.

They found no increase in the rate of arterial clots, such as heart attacks or strokes, according to the findings in the British Medical Journal.

Meanwhile, researchers found 15 deaths from all causes after vaccination with the Oxford-AstraZeneca vaccine compared with an expected 44 deaths, showing a lower chance of death after the vaccine.