A Russian attack helicopter makes a menacing low pass over a rural village in Ukraine, its gunship fully equipped with missiles and machine guns.

But, unknown to the crew of the state-of-the-art Mi-24 Hind aircraft, Ukrainian soldiers are waiting unseen in the line of trees below.

Dramatic footage emerged yesterday of the final moments of the helicopter, christened the ‘flying tank’ by Russian air crews.

As it makes its approach, the defending troops fire a rocket skywards from a frost-covered field about 25 miles outside the capital Kyiv.

The warhead fizzes, leaving a trail of white smoke in its wake. It locks on to its target before the crew can engage their infrared jammers and flare dispensers. 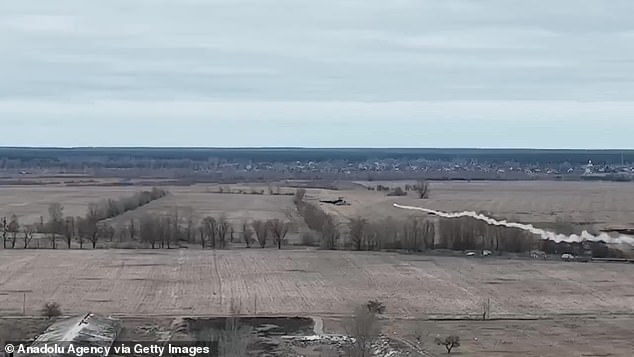 Dramatic footage emerged yesterday of the final moments of a helicopter, christened the ‘flying tank’ by Russian air crews, after it was hit by Ukrainian soldiers

The invaders receive a brutal and direct hit; the helicopter explodes instantly, sending brilliant orange flames bursting from the engine.

The stricken Mi-24 plummets to the earth, hitting the ground nose-first, with all her pilots and navigators feared killed.

Their deaths came on a day when Russian aerial forces lost as many as eight aircraft, as well as multi-role, strike and close air support aircraft and a drone.

Their losses, claimed by Ukrainian military sources, provide further evidence of Russia’s failure to gain air superiority – a tactical advantage that Vladimir Putin thought would be achieved on the first day of the war.

In the incident pictured above, the Ukrainians are thought to have used a specialist short-range weapon system, the Polish PPZR Piorun, which is ideal for targeting low-flying helicopters.

The video is believed to have been recorded by a drone, with Western sources confirming the location as Kozarovychi in the Kyiv region.

In another remarkable development yesterday, Putin came under pressure from his own soldiers to stop the war. At a press conference in Kyiv, captured Russian troops condemned the mission and called on their fellow citizens to rally against the conflict. 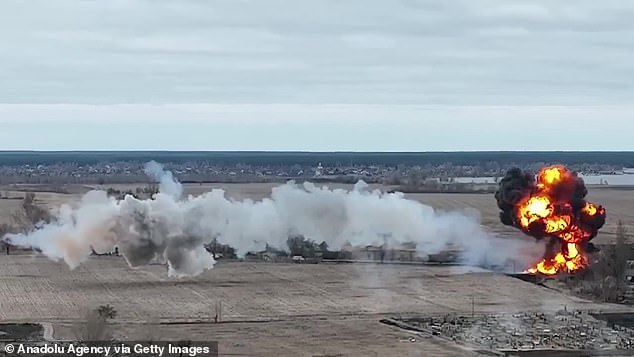 Yesterday footage also emerged of a Russian pilot wearing a blue jumpsuit and a bloodstained T-shirt being treated for a head wound after he crashed in a field. 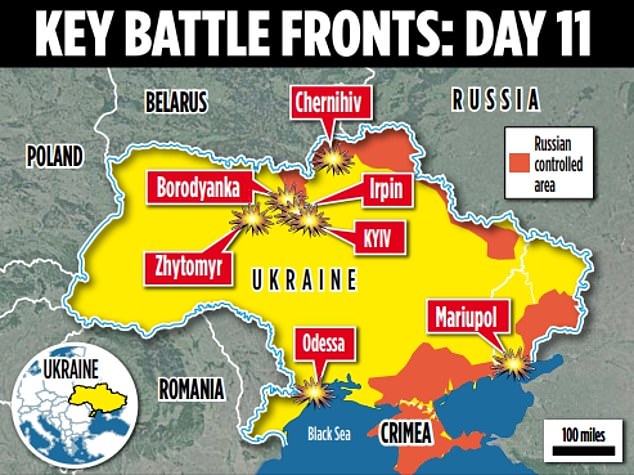 President Zelensky claimed yesterday that 10,000 Russian troops had died in the war, a claim that could not be independently verified. ‘We’re inflicting losses on the occupants they could not see in their worst nightmare,’ he added.

The Russian military, which does not offer regular updates on casualties, said on Wednesday that 498 of its troops had died in the conflict. Ukraine’s military might is vastly outmatched by Russia’s, but its military and volunteer forces have fought back with fierce tenacity since the invasion.

Last night, a vast Russian armoured column threatening Ukraine’s capital remained stalled outside Kyiv and there was heavy fighting to the north-west of the capital around the key Hostomel airport.

However, there have also been warnings that the vulnerability of Russian jets may lead Putin’s commanders to rely on artillery to bombard civilian infrastructure. This is likely to lead to further innocent lives being lost because artillery is less accurate than air strikes.

Western officials have confirmed Russia has been forced to resort to indiscriminate aerial and artillery assaults on densely populated urban areas because its military campaign is floundering. 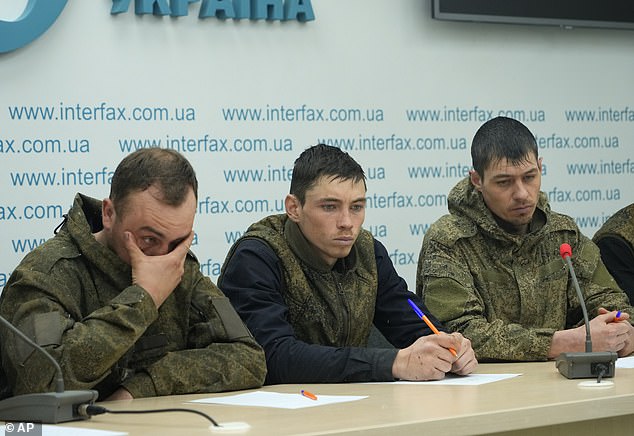 At a press conference in Kyiv, captured Russian troops condemned the mission and called on their fellow citizens to rally against the conflict

An official told The Mail on Sunday: ‘The original plan was a rapid assault on Kyiv from the north and a sweeping up from the south using combined units and arms. But they are having to resort to pounding areas with massed artillery. The impact is likely to result in increased civilian casualties.’

Artillery is expected to be the weapon of choice for the Kremlin as it continues to hit the cities of Kharkiv, Chernihiv, Sumy and Mariupol. The UK’s Ministry of Defence confirmed that these cities have been encircled by Russian troops.

Evidence has also emerged to suggest that Russian jets have been downed near Chernihiv in northern Ukraine. The bombing has been so extensive there that local officials have likened it to the German Army’s bombardment of Stalingrad during the Second World War.

On Friday at least 47 people were killed and hundreds more injured when Russian jets fired missiles into high-rise apartments in the city, reducing them to piles of blazing rubble, with residents trapped underneath.

Yesterday heartbreaking pictures emerged of men, women and children hiding under a destroyed bridge to escape Russian air strikes on Irpin, on the outskirts of Kyiv.

Hundreds of residents sheltered in the darkness beneath the bridge which had been blown up by the Russians. They were forced to seek refuge there – even though the bridge could collapse – because Russian warplanes were circling overhead.

President Zelensky has been calling for the ‘complete closure of the sky for Russian missiles, aircraft and helicopters’.