More than 1,700 people in cities across Russia have been detained while taking part in anti-war protests against the country’s invasion of Ukraine, a monitor said, more than a week after the assault began.

OVD-Info, which monitors detentions at opposition protests, said that by around 2.20pm Moscow time (11.20am GMT) on Sunday, 1,754 people had been detained across 44 Russian cities.

Images from Russia’s largest cities of Moscow and Saint Petersburg showed riot officers manhandling both men and women on Sunday as Russia continued its attacks on cities across Ukraine.

Video footage also showed police officers stopping people in the streets and demanding to see their phones, reading their messages and arresting anybody who refused to comply, while other activists were filmed being battered by officers armed with batons.

The Siberian city of Novosibirsk and Yekaterinburg in the Urals reported the highest number of detentions, according to OVD-Info.

Memorial, Russia’s most prominent rights group, said that one of its leading activists, Oleg Orlov, was detained on Moscow’s Manezhnaya Ploshchad square as he held a placard.

It comes as Russian authorities continued to block independent news outlets in an effort to tighten control over what information its domestic audience sees about the invasion of Ukraine.

Several prominent independent online outlets were blocked on Sunday, on top of dozens of others that were blocked last week.

Others decided to halt operation in Russia because of new repressive laws or refused to cover the invasion at all because of the pressure. 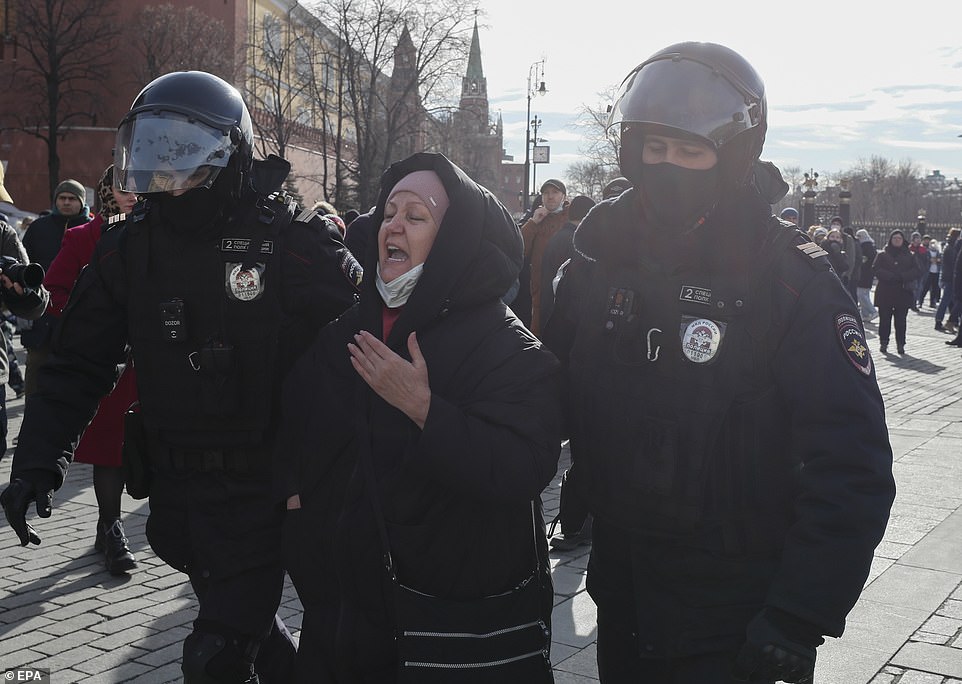 MOSCOW: A woman shouts as two officers detain her for taking part in an anti-war protest in Moscow on Sunday afternoon 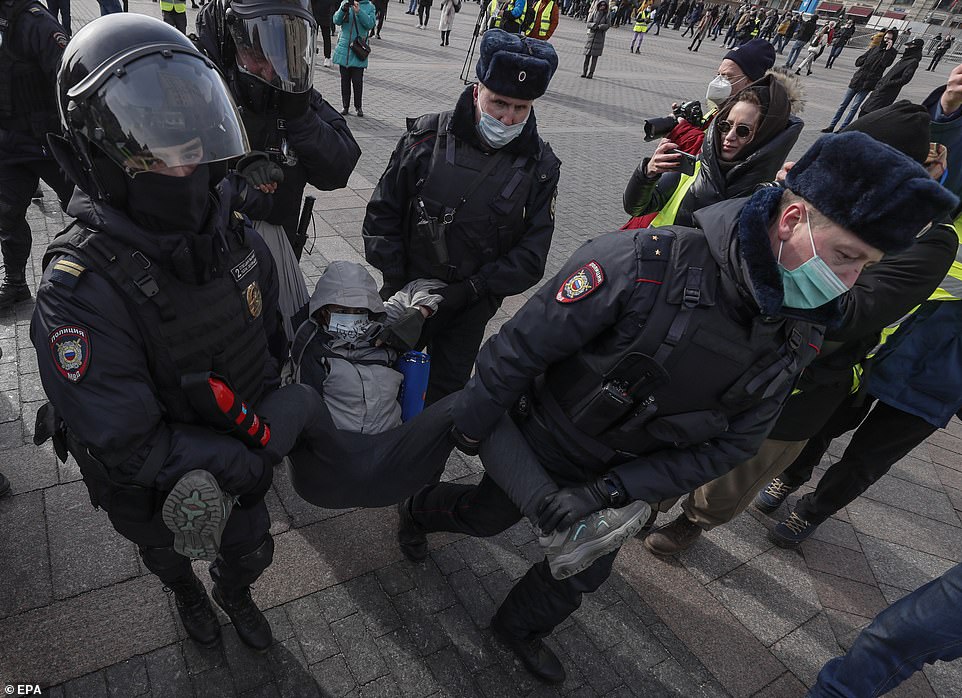 MOSCOW: Four police officers are seen carrying a masked protester who was rallying against Russia’s invasion of Ukraine 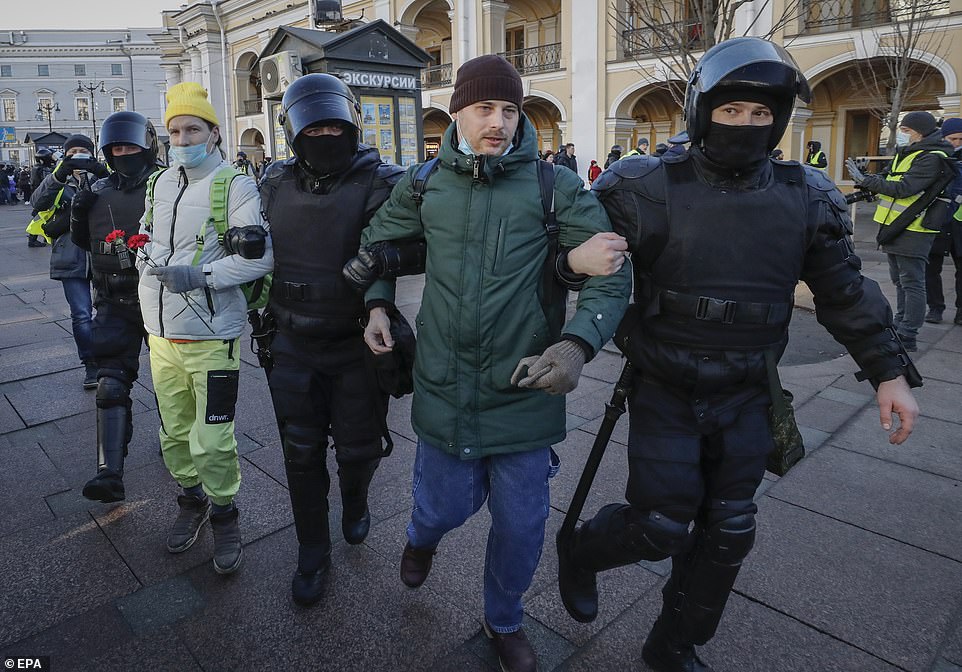 SAINT PETERSBURG: Two protesters are detained by riot police after taking part in a demonstration against Russia’s invasion of Ukraine 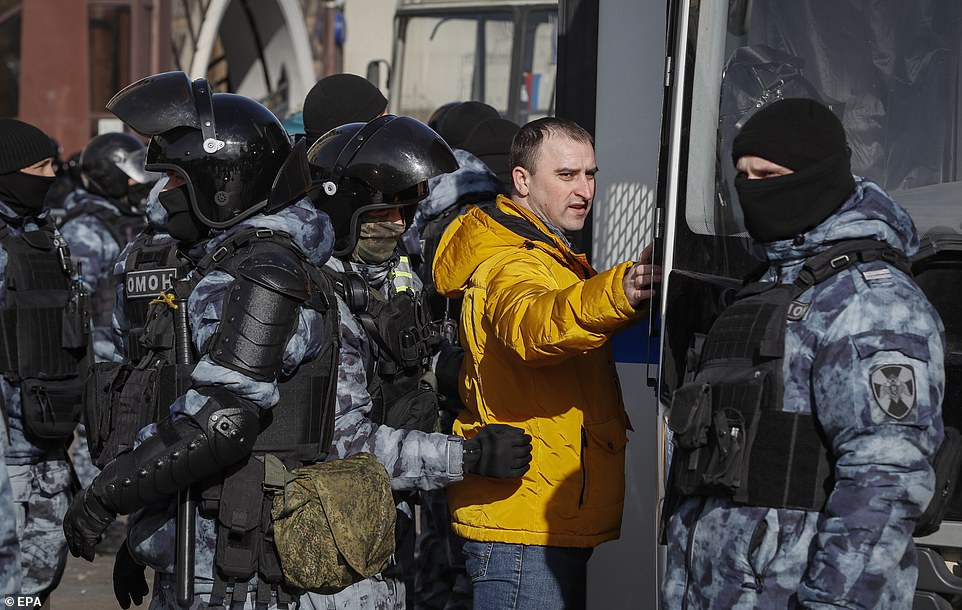 MOSCOW: A man is detained by armed officers – one of the more than 10,000 Russians to have been arrested since Russia’s invasion of Ukraine 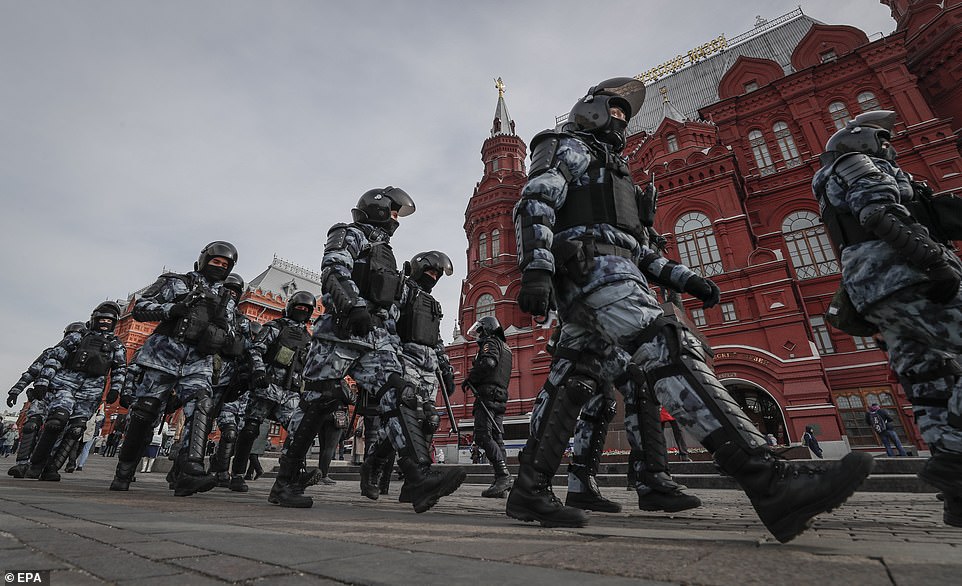 MOSCOW: Russian police officers patrolling the streets of Moscow ahead of the planned demonstration against the invasion of Ukraine 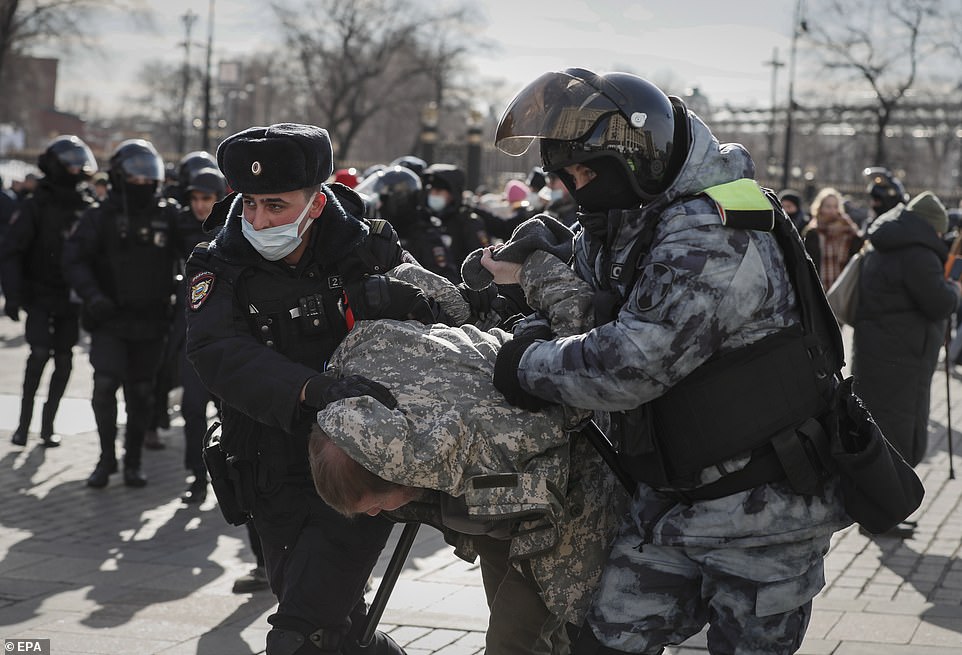 MOSCOW: Two police officers manhandle a protester in Moscow – one of 1,754 people to have been detained across 44 Russian cities on Sunday

Russian police on Friday had warned that all attempts to hold illegal demonstrations on Sunday would be ‘immediately suppressed’ and organisers and participants would face charges.

The total number of Russian demonstrators held since February 24, when President Vladimir Putin ordered troops into Ukraine to carry out a ‘special operation’, has now risen to almost 10,000.

Despite the official crackdown on demonstrations, and protesters facing jail terms, there have been daily protests since the invasion.

The new additions to the list of blocked media included Mediazona, a news site that covers Russia’s police and justice system and has been an indispensable source of information about political arrests and high-profile court cases; the 7×7 site covering regional news; the Troitsky Variant popular science newspaper that has published an open letter decrying the invasion; and two regional news sites that also spoke out against the attack.

US-funded broadcaster Radio Free Europe/Radio Liberty announced on Sunday it was suspending its operation in Russia after it said the country intensified pressure on its journalists and tax authorities initiated bankruptcy proceedings against it.

‘(Russian communications and media agency) Roskomnadzor demanded we delete our entire website. Yes, we received this demand from the agency – to block ourselves. Because we incorrectly cover Russia’s attack on Ukraine and call the war a war,’ Mediazona said in a statement.

‘We were prepared for this. In recent days, military censorship has been effectively introduced in Russia, and there are almost no independent media left in the country.

‘We understand all our risks, but we continue to work – this is our duty to our readers and to ourselves,’ the outlet said and listed several ways Russian readers can get around the block.

RFE/RL, which has been physically present in Russia since 1991, was planning to continue reporting on Russia and its war in Ukraine from abroad.

‘We will continue to expand our reporting for Russian audiences and will use every platform possible to reach them at a time when they need our journalism more than ever,’ chief executive Jamie Fly said.

Earlier this week, jailed Kremlin critic Alexei Navalny urged Russians to stage daily demonstrations, saying the country should not be a ‘nation of frightened cowards’.

‘I am urging everyone to take to the streets and fight for peace,’ he said in a statement posted on Facebook, calling on Russians not to be afraid of going to prison.

‘Everything has a price and now, in the spring of 2022, we should pay that price.’ 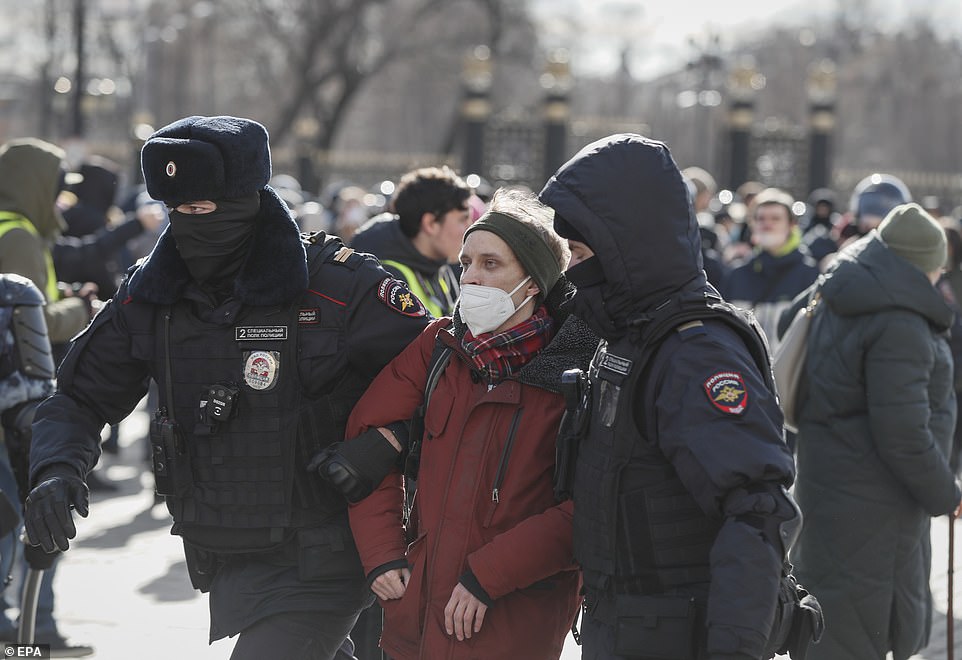 MOSCOW: Another protester, held by two police officers, is taken away from the demonstration held in Moscow on Sunday afternoon 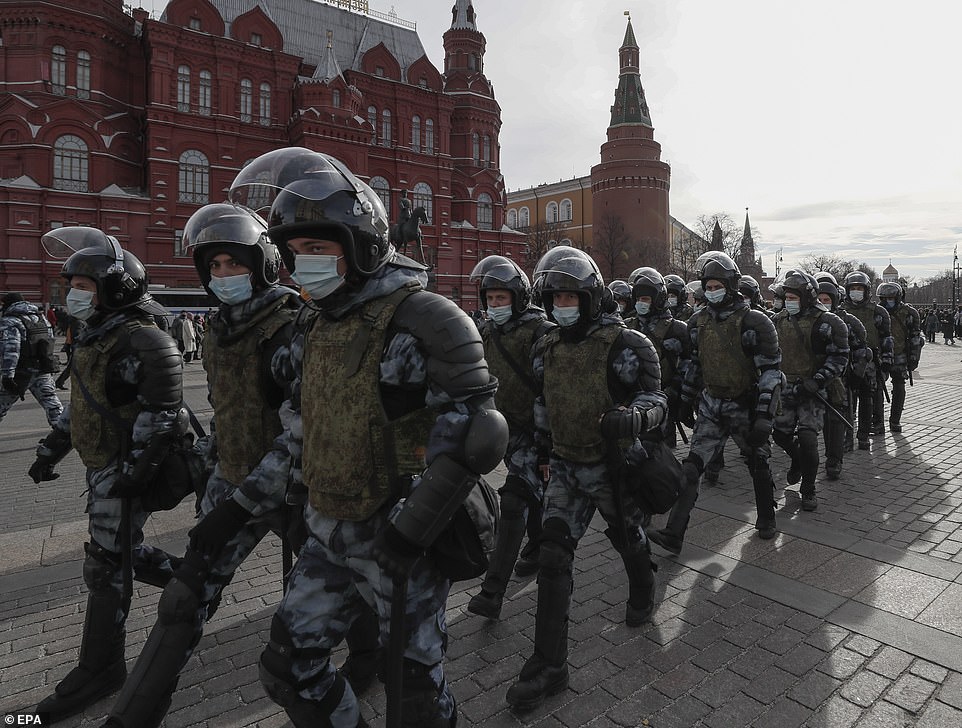 MOSCOW: Hundreds of Russian police officers were deployed onto the streets of Moscow on Sunday morning ahead of a planned demonstration against the invasion of Ukraine 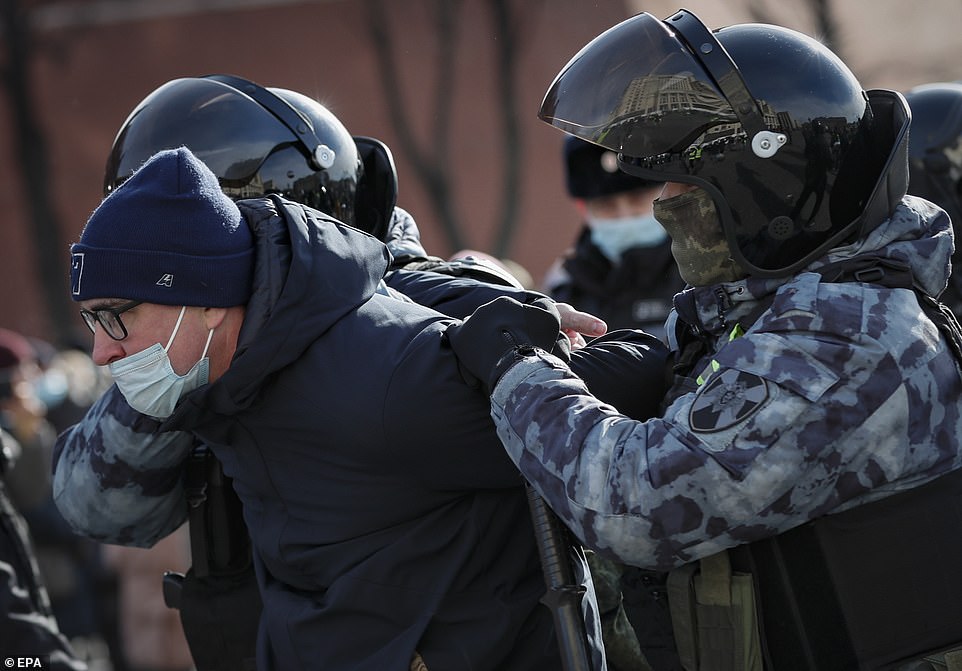 MOSCOW: Memorial, Russia’s most prominent rights group, said that one of its leading activists, Oleg Orlov, was detained on Moscow’s Manezhnaya Ploshchad square as he held a placard 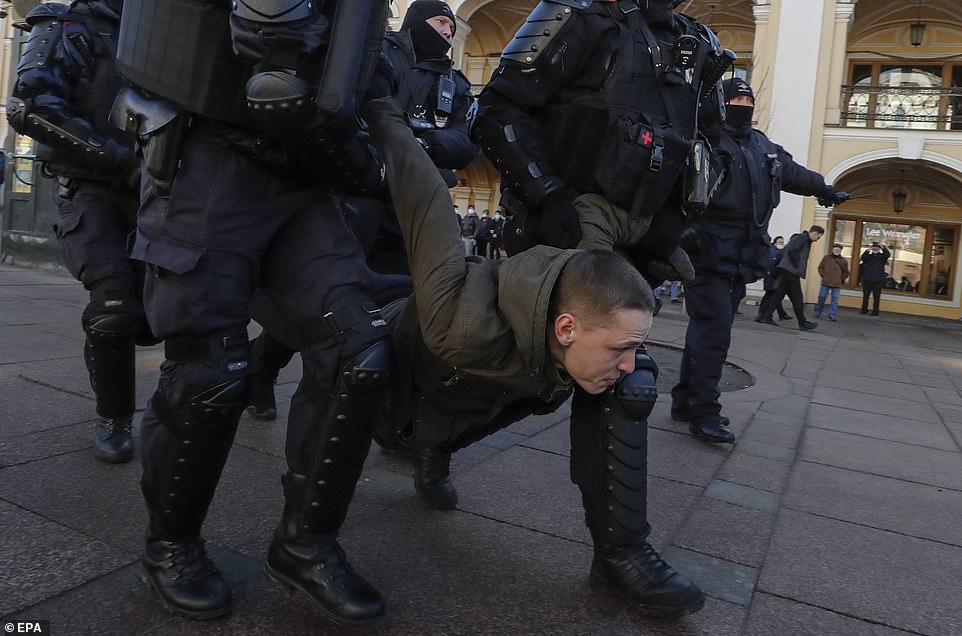 SAINT PETERSBURG: Four police officers grab hold of a protester and take him away from the streets after he took part in a protest on Sunday afternoon 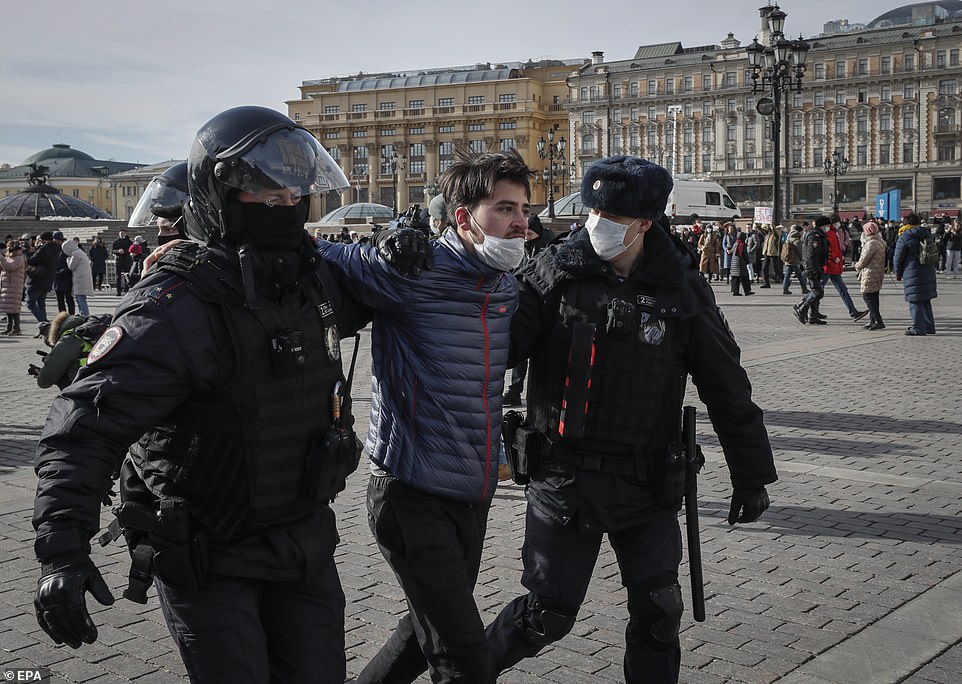 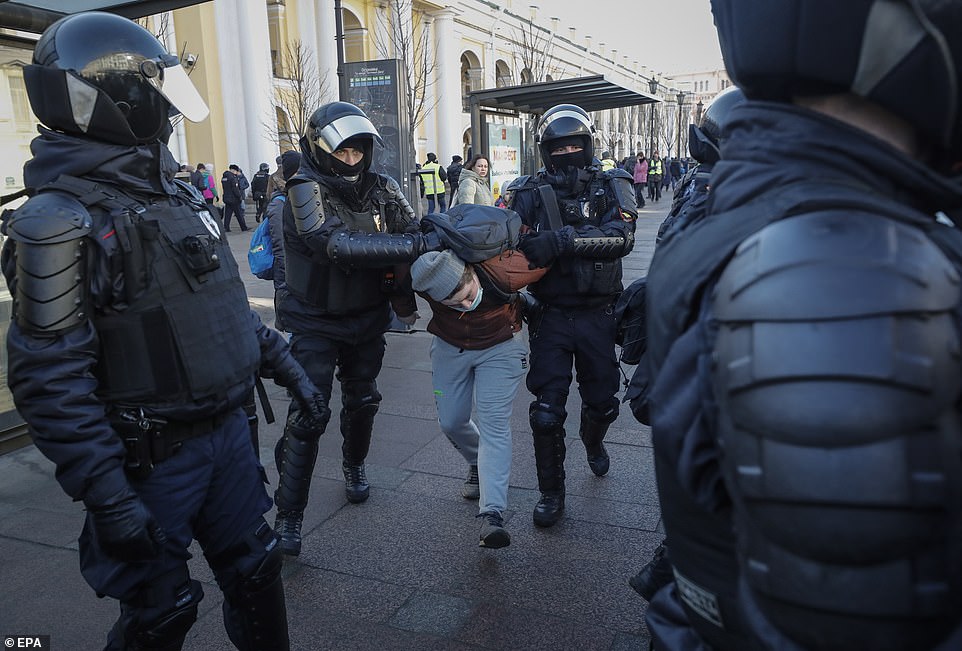 SAINT PETERSBURG: OVD-Info, which monitors detentions at opposition protests, said that by around 2.20pm Moscow time (11.20am GMT) on Sunday, 1,754 people had been detained across 44 Russian cities 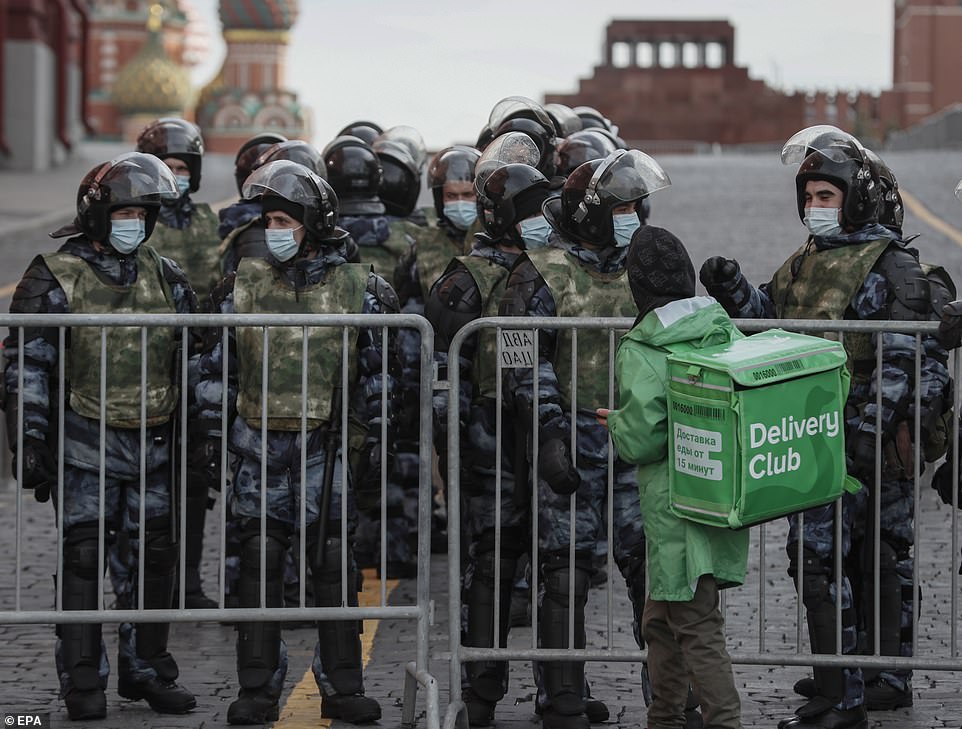 MOSCOW: Russian policemen talk with a delivery man as they stand guard prior to a protest against the Russian military aggression in Ukraine 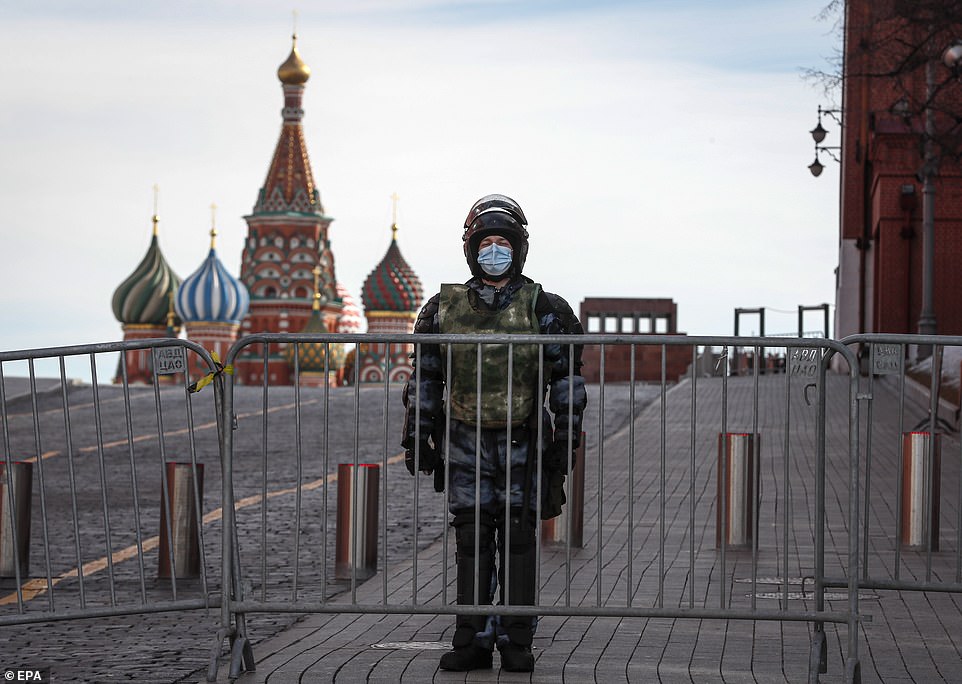 MOSCOW: A Russian policeman standing guard close to St Basil’s Cathedral, in Moscow, ahead of a planned demonstration

The 45-year-old, who led the biggest protests in Russia against Putin in recent years and survived a poisoning with Novichok nerve agent in 2020, is now serving a prison sentence on old fraud charges outside Moscow.

Thousands of Russians have taken to the streets to protest the invasion since it began, and more than 6,800 demonstrators have been arrested, according to OVD-Info, an independent monitor.

Navalny urged the people of Russia and Belarus – which allowed Russian troops passage to attack Ukraine – to demonstrate in main squares at 7:00 pm every weekday and at 2:00 pm on weekends and during holidays.

‘You cannot wait another day,’ he said, adding that Russia should not become a ‘nation of frightened cowards’ who are pretending not to see an ‘aggressive war unleashed by our clearly insane little tsar.’

On Friday, Putin signed into law a bill introducing jail terms of up to 15 years for publishing ‘fake news’ about the Russian army.

Russian authorities have repeatedly and falsely decried reports of Russian military setbacks or civilian deaths in Ukraine as ‘fake’ news, as well as reports calling the offensive a war or an invasion.

State media outlets and government officials refer to Russia’s invasion of Ukraine as a ‘special military operation’ and insist the Russian forces only target military facilities.

Despite the efforts to tightly control the narrative, Russians all across the country have spoken out against the war.

Tens of thousands have signed open letters and online petitions demanding to stop it, and street protests in dozens of Russian cities have been happening almost daily since the attack began on February 24 – always followed by mass detentions.