The Bank of England was today slammed for scrubbing its logo of the St George’s Cross and replacing it with the Union flag because it is ‘more inclusive’.

Officials were branded ‘incompetent, woke idiots’ for the rebrand, while another critic commented, ‘And the metropolitan liberal (so-called) elite wonder why English nationalism is on the rise!’

The Bank has made several other controversial changes to its 328-year-old seal, including removing the pile of money at the feet of Britannia – the female personification of Britain.

While her right hand still holds a spear, she is depicted in a more passive stance, with her left arm – which wields an olive branch representing peace – now bent rather than thrusting forwards.

John Bell, a retired academic, said: ‘So the Bank of England is ashamed of being a Bank (no pile of coins) and English (cross of St George replaced by the Union flag), and even of Britannia’s (and its) role as the spreader of peace and prosperity (enfeebled Britannia).’ 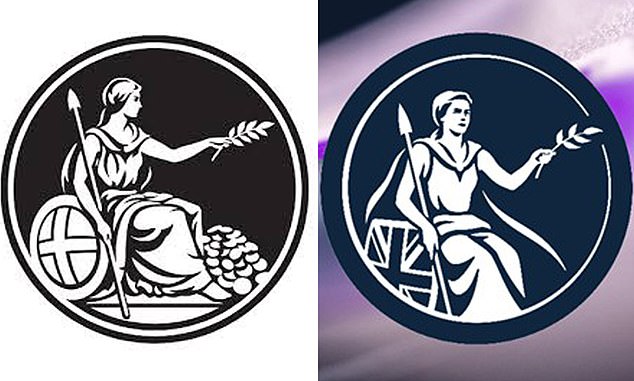 ‘I mean honestly what are these people playing at? Incompetent, woke idiots.’

Others also took to Twitter to express their anger at the politically correct rebranding.

Simon Barrall wrote: ‘Why has the Bank of England removed the Cross of St George from its logo and replaced it with the Union flag? It is the Bank of ENGLAND?’

Meanwhile, another critic said: ‘And the metropolitan liberal (so called) elite wonder why English nationalism is on the rise!’

The Bank has played up its ‘woke’ credentials in recent years, proudly declaring itself a Stonewall Diversity Champion, after joining a scheme run by the controversial charity.

The charity has recently been dropped by partners such as the BBC, House of Lords and Cabinet Office over concerns it could pressure employers to change their policies to reflect its agenda on trans rights.

MailOnline has asked the Bank to reveal the cost of the redesign. It has also made changes to its website.

While logo has not been entirely overhauled, there are a number of obvious differences between the new and the old.

A pile of what appear to be coins laying at the feet of Britannia have disappeared from the new seal, as have the feet themselves.

Meanwhile, the shield resting next to her has been redesigned, with the St George’s cross on the previous version being replaced with the Union Jack.

And Britannia herself has shifted – no longer sat side-on, she has turned slightly to a more face-on position.

On its website, the Bank said its mission was ‘to serve the people of the UK’ and it had looked at this as part of the redesign, adding the new logo ‘reflects our commitment to be plainer and simpler’. 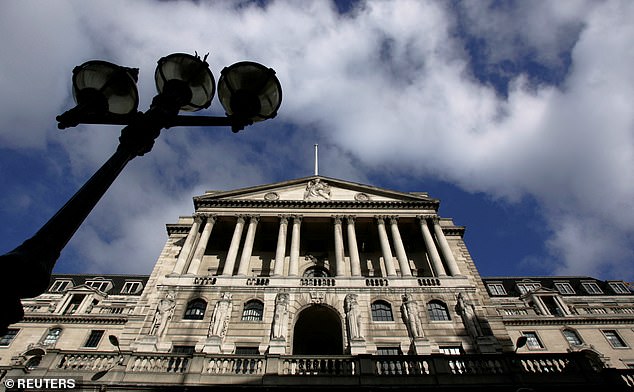 The Bank of England, pictured, said it wanted to become more ‘inclusive’ and this was a driving force behind the changes

A history of ‘The Old Lady of Threadneedle Street’ 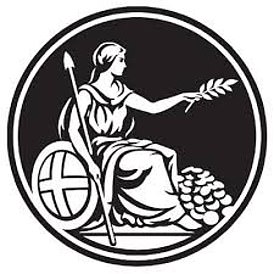 The old seal of the Bank of England, which shows Britannia holding a shield, spear and olive branch, and sat on top of a pile of coins

For almost all of its entire 328-year history, the Bank of England has been based on Threadneedle Street in the City of London.

It has long been known as  The Old Lady of Threadneedle Street, a name it takes from a picture by artist James Gillray in the 1797.

The satirical image shows Prime Minister William Pitt the Younger pretending to ‘woo’ an old lady, who is a personification of the Bank.

What he really wants though is the Bank’s money, represented by coins which are falling out of her pocket, and a chest which she is sitting on.

At the time the bank was still essentially a private company, with critics suggesting politicians were taking advantage of ‘The Old Lady’.

The image and the subsequent nickname has stuck over the years, with many still calling the Bank, The Old Lady of Threadneedle Street.

Some get this mixed up with Britannia, who is the figure on the seal of the Bank.

Britannia has been associated with the Bank since its inception, with a Court of Directors declaring the Common Seal of the bank should represent ‘Britannia sitting and looking on a Bank of money’, only days after it gained Royal Charter in 1694.

One booklet found in the Bank’s archives suggests the group had been inspired by the design found on the reverse of the halfpenny and farthing at the time .

The motif was only brought into existence though 20 years later, when Flemish engraver John Roettier created the image after being inspired by a coin featuring the motif of Roman emperor Hadrian.

Using the face of Frances Stuart, who later became the Duchess of Richmond as a model, he showed Britannia holding an olive branch in her right hand, a spear in her left, with a  shield with the combined crosses of St George and St Andrew.

This was minted onto coins, but the seal itself differed in some aspects – on the seal she sat higher up, looked to the right instead of the left, had a waist-high bank of money and the shield only showed the St George’s cross.

Over the years she has been designed a number of times – sometimes she was shown looking over her shoulder away from the pile of money, while on others she could be seen standing in a chariot being pulled by two horses.

The pattern eventually settled on her being seated, holding a spear and shield in one hand, a sprig in the other, and with a crown above her head.

It said: ‘One part of how we communicate is the ‘look and feel’ of our content. That includes things like our logo, and the colours and typography we use.

‘We want to make these things more accessible and inclusive. So our in-house designers have worked with industry leaders to create a new, digital-first ‘visual identity system’ for our website and publications.

‘We will keep on working to improve the way we communicate because this will help us to carry out our mission.’

While the logo is the most obvious change, the Bank added it had redesigned its website and typface to make it easier to read for people with dyslexia.

It said: ‘It’s estimated up to 1 in every 10 people in the UK has some degree of dyslexia.

‘So we have designed a new typeface that is easier to read.

‘The design was created by industry-leaders in type design. It’s based on guidance by the British Dyslexia Association.’

It added it had changed its use of colours, inspired by those used on its banknotes, to make the contrast between the colour of the text and backgrounds better.

‘These advances have brought many benefits. One is that it brings us closer to the public we serve. We know this means we have to explain what we do and why.

‘How we communicate is part of how we carry out our mission. We intend to keep trying to make our communications more inclusive and accessible for everyone.’

The Bank proudly declares itself a Stonewall Diversity Champion, and it was ranked number 57 on the charity’s list of Top 100 employers for LGBTQ+ people.

The charity has come under fire recently for the scheme, which tells employers how to create an inclusive environment for LGBT staff members and then ranks them based on how good they do.

Last month it was reported that Whitehall is being told to ditch the scheme, which costs £5,000-a-year to join, over fears the charity is advising members to rewrite their policies to reflect its agenda on trans rights.

The House of Lords has already pulled out of the scheme, as has the BBC and the Cabinet Office.

Instead, the Cabinet Office issued guidance saying schemes such as this should not be done with ‘external assurance and benchmarking organisations’, but should be done in-house.

Meanwhile, in June last year the Bank came under fire for removing portraits of former governors who were linked to the slave trade.

Governor Andrew Bailey was accused of taking part in a ‘latter-day Bonfire of the Vanities’ after the objects were removed following a review.

The seventh figure is William Dawsonne, director of the bank from 1698 to 1719.

A spokesman for the Bank of England said: ‘In June 2020, the Bank announced a review of its collection of images of former governors and directors, to ensure none with known involvement of the slave trade remain on display anywhere in the Bank.’ 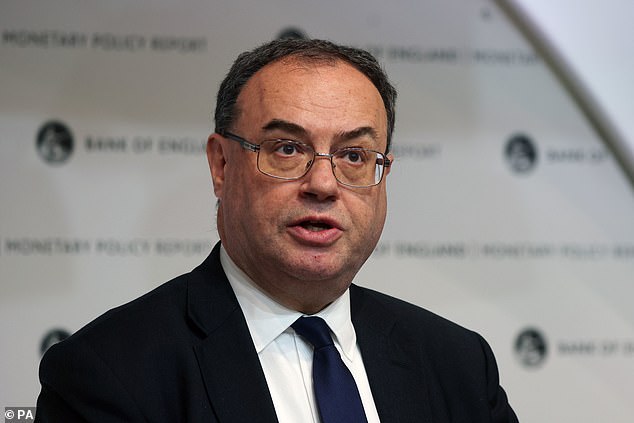 Governor of the Bank of England, Andrew Bailey (pictured), said the move was part of the Bank’s mission to be ‘inclusive and accessible’