Emotional text messages between married former cabinet minister Alan Tudge and his ex media advisor Rachelle Miller have been revealed after an inquiry found he did not breach ministerial standards.

Ms Miller alleged Mr Tudge emotionally abused and on one occasion physically abused her during their consensual affair in 2017.

Mr Tudge said he was intimate with his former staffer on four separate occasions but was adamant they never had sex, and he didn’t consider them to be in a relationship.

He told the Prime Minister that despite being cleared in the inquiry, he would not be returning to the front bench ‘in the interests of his family and his own wellbeing and in order to focus on his re-election as the member for Aston’.

The details of the inquiry by inspector-general of intelligence and security Vivienne Thom into Ms Miller’s allegations were released on Friday. 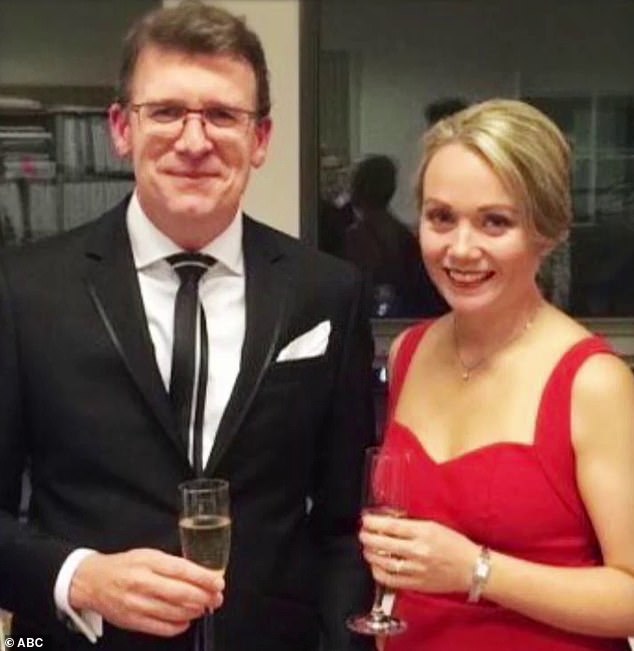 Ms Miller – who was also married at the time of the affair – did not participate in the inquiry, saying the process was flawed and the government had ignored her concerns about the terms of reference.

Dr Thom concluded the evidence in the inquiry ‘does not provide a basis for a finding that Mr Tudge’s conduct breached the ministerial standards’.

Texts and emails between the pair, seen by The Australian, show Ms Miller was persistent in trying to reconnect with Mr Tudge for four years after their affair ended in 2017, telling she missed and loved him.

In one text dated from March 2020, Ms Miller wrote: ‘I apologise for the things I’ve said to you. I have not been nice, I am sad and hurt. I want to believe you don’t deserve me. But you know that I love you’.

Mr Tudge told the enquiry he has not seen Ms Miller since 2017 and cut off communication with her in October 2020.

‘I deeply regret the consensual affair with Ms Miller in the second half of 2017 when both of us were married with children and in our forties,’ he said.

‘It should never have happened and it has caused hurt to our respective families. It caused the end of my marriage that year.’

In December last year Ms Miller made the allegations about her former boss, alleging he had bullied and harassed her.

The inquiry was provided with countless message exchanges between Mr Tudge and Ms Miller.

She had suggested one encounter may not have been consensual but in a text from March 2020 Ms Miller said ‘We broke no rules, it was consensual, we were never together at work or during work hours’. 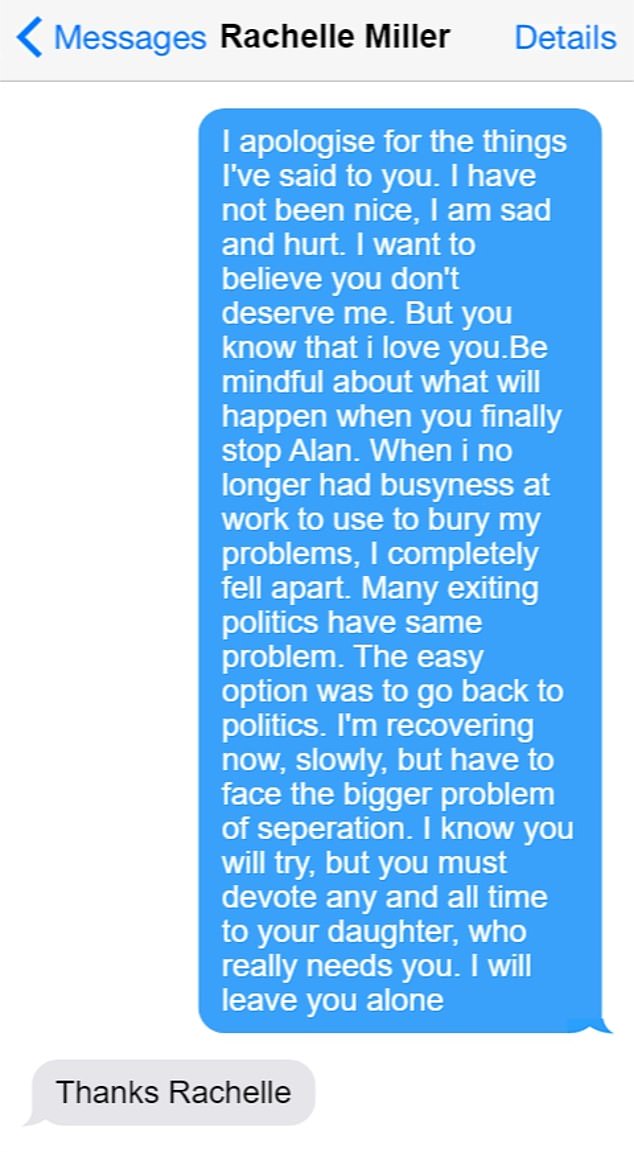 Texts and emails between the pair show Ms Miller was persistent in trying to reconnect with Mr Tudge in the four years after their affair ended in 2017, telling she missed and loved him 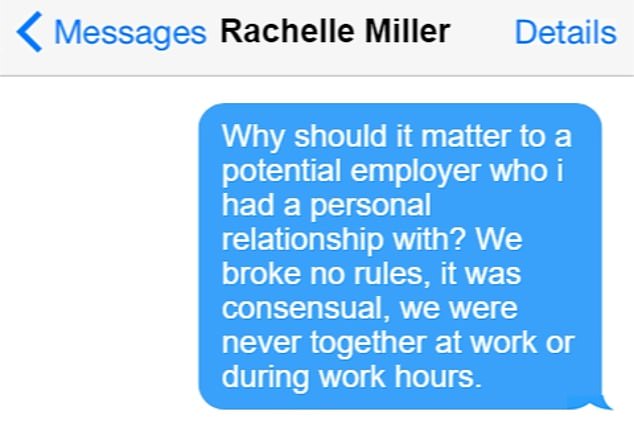 One message shows Ms Miller saying their relationship was consensual

That claim was from a night they shared in Kalgoorlie in 2017, where Ms Miller later said: ‘I don’t ­remember leaving the bar. I don’t remember if we had sex. I didn’t know if we used protection. I still don’t. I was too afraid to ask him if he remembered.’

In another text from Ms Miller in March 2020, she expresses to Mr Tudge that she missed him.

‘Know you don’t feel the same so I have said awful things because I was hurt. After that last night together it shattered me. I simply miss you.’

Ms Miller had also alleged on that night in Kalgoorlie that the former human services minister had kicked her out of his bed and told her to ‘get the f**k out’.

‘I categorically deny kicking her in the bed and calling for her to ‘get the f**k out my room,’ Mr Tudge told the inquiry. 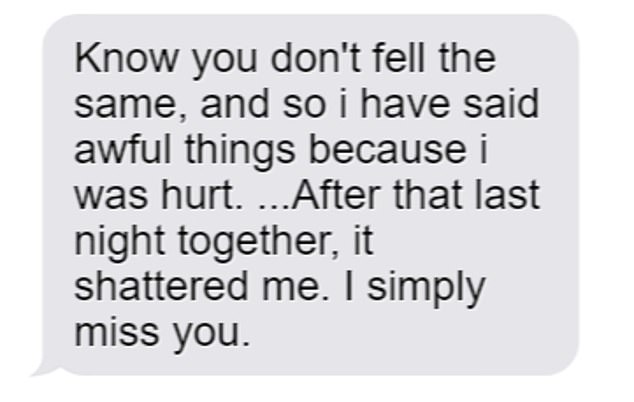 Another text shows Ms Miller telling her former boss she missed him, years after their affair ended

‘This is not in my character at all. I have never kicked or hit anyone in my life, and of course never a woman. I have never been in a fight. I am not an aggressive person.’

Mr Tudge also clarified he never saw a future with Ms Miller, saying the pair did not speak regularly about non-work matters.

‘I did not consider this to be a ‘relationship’ in the usual sense of the word. There were almost none of the typical characteristics of what would ordinarily be considered a relationship,’ he said. 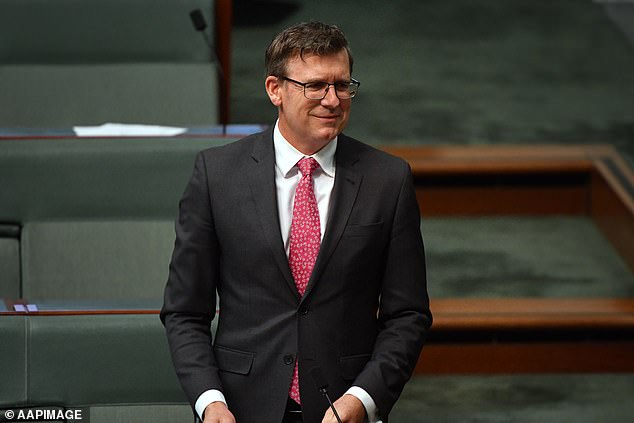 ‘We never had sex. We never talked about a future together, whether in the short, medium or long term.’

Mr Tudge said he believed Ms Miller wanted to pursue a relationship with him which was unreciprocated, and denied her allegations of bullying and abuse.

Dr Thom sought evidence from five other staff members who worked with Ms Miller and Mr Tudge together and said they saw no evidence of bullying. One said they believed Ms Miller was ‘obsessed’ with Mr Tudge.

A staffer said Ms Miller spoke ‘glowingly’ about the trip to Kalgoorlie.