A second healthcare worker in Alaska has suffered an allergic reaction after receiving Pfizer Inc's coronavirus vaccine on Wednesday.The man, a sta


A second healthcare worker in Alaska has suffered an allergic reaction after receiving Pfizer Inc’s coronavirus vaccine on Wednesday.

The man, a staff member at Bartlett Regional Hospital in Juneau, started experiencing eye puffiness, light headedness and a scratchy throat 10 minutes after being injected, a statement from the hospital read.

Doctors determined he was not going into anaphylactic shock and he was given epinephrine – a hormone that opens the airways – Pepcid and Benadryl.

Hospital officials say his symptoms resolved within an hour and he was released from the emergency department.

It is unknown if the man has any history of allergies, either to food or medications.

The news comes just one day after another worker at the same hospital experienced an allergic reaction to the immunization, but needed to be hospitalized.

DailyMail.com has reached out to Bartlett Regional Hospital for a request for comment.

Currently, Alaska is the only state reporting any adverse events in frontline healthcare workers given the jab since the rollout began on Monday. 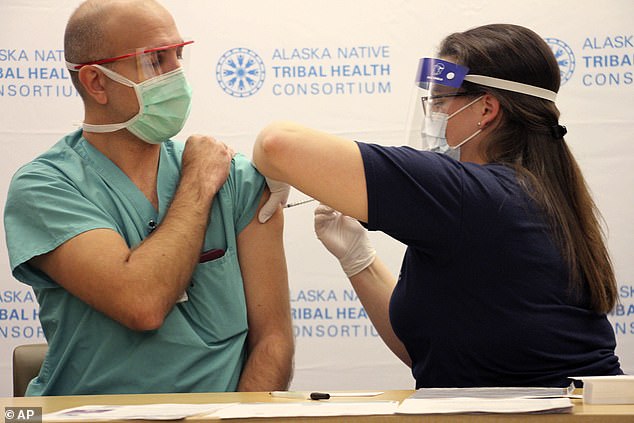 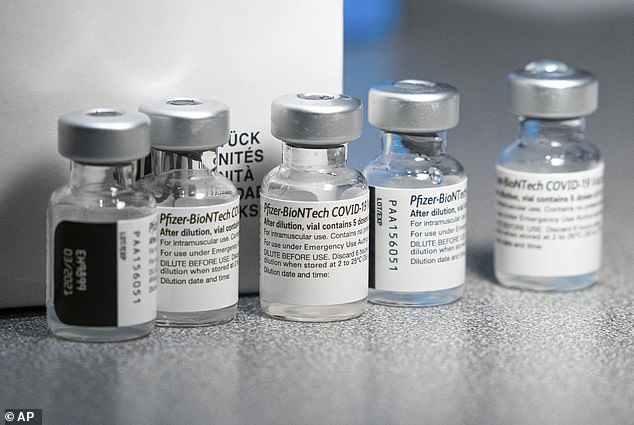 He experienced symptoms such as eye puffiness, light headedness and a scratchy throat, which resolved in an hour after being given Benadryl. Pictured: Pfizer’s coronavirus vaccine at Providence Alaska Medical Center in Anchorage, December 16 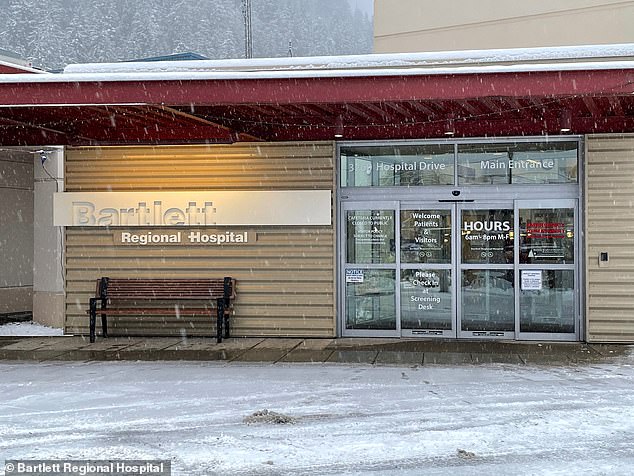 His reaction was less serious than another healthcare worker, also from Bartlett Regional Hospital (pictured), who went into anaphylactic shock on Tuesday after getting the jab

The first reaction was suffered by a female healthcare worker who was given the vaccine on Tuesday.

At a news conference on Wednesday, officials said the unnamed woman started experiencing increased heartbeat, shortness of breath and a skin rash/redness within 10 minutes of being injected.

She was given epinephrine and Benadryl, admitted to the hospital, and put on an intravenous epinephrine drip.

Emergency Department Medical Director Dr Lindy Jones said the woman’s reaction was serious, but not life-threatening, and she remains hospitalized as of Thursday.

The woman has no history of allergies, according to a press release from the Alaska Department of Health and Social Services.

Both workers say they do not want their individual reactions to dissuade their colleagues from getting vaccinated.

The incidents were reported to the Centers for Disease Control and Prevention’s (CDC) Vaccine Adverse Event Reporting System database and the hospital is in close communication with the federal health agency.

Dr Anne Zink, Alaska’s chief medical officer, said the state is not making any changes to its plan to administer the vaccine.

‘There were over 40,000 people in the trials and we did not see any reactions like this,’ Zink said at Wednesday’s news conference.

At Bartlett Regional Hospital, 400 staff members have signed up for the COVID-19 inoculation.

Over the last 24 hours, 144 doses of the vaccine have been administered at Bartlett with a booster shot given in three weeks.

British regulators are advising that anyone who has a history of ‘significant’ allergic reactions to medicines, food or vaccines should not get the Pfizer coronavirus jab.

Allergic reactions to the vaccine are ‘very rare’, according to the trials involving more than 40,000 people.

Pfizer found a ‘very small number’ during its phase three clinical studies, or 137 out of 19,000 people who got the vaccine. But 111 people who were given a placebo also had allergic reactions.

They also identified 12 possible side-effects from the vaccine, with seven identified as ‘very common’ meaning they are likely to affect more than one in ten people. Below are the known side effects.

The patient safety leaflet for the vaccine cautions that anyone with an allergy to any of the active substances in the vaccine should not receive the jab.

Allergic reactions to the vaccine are:

Very common (Likely to affect more than one in ten people)

Common (Likely to affect up to one in ten people)

Uncommon (May affect one in 100 people)

‘We don’t yet have all the details of the report from Alaska about a potential serious allergic reaction but are actively working with local health authorities to assess,’ a Pfizer spokeswoman told DailyMail.com on Wednesday, in reference to the first healthcare worker.

‘We will closely monitor all reports suggestive of serious allergic reactions following vaccination and update labeling language if needed.

‘The prescribing information has a clear warning/precaution that appropriate medical treatment and supervision should always be readily available in case of a rare anaphylactic event following the administration of the vaccine.’

Anaphylactic shock is a severe and potentially life-threatening reaction to an allergy from food, medicine or even a type of material.

The immune system releases chemicals that flood the body, blood pressure suddenly drops, and airways narrow, which prevents someone from breathing normally.

Symptoms usually occur within minutes and include hives, a weak pulse, nausea, vomiting, dizziness and a swollen tongue or throat.

If not treated immediately, it can lead to death.

In the U.K., two National Health Service (NHS) staff members with a history of severe allergies suffered reactions after being immunized.

Both of them carried devices that contain epinephrine, a hormone that relaxes the airway muscles, in case they suffered any reactions.

A third patient also had a ‘possible allergic reaction,’ but British authorities neither described it nor gave an update on the patient.

Pfizer says its jab is not made with any egg ingredients.

After the reactions, the U.K.’s Medicines & Healthcare products Regulatory Agency (MHRA) issued a warning that anyone with severe allergic reactions to food or medicine not be given the vaccine.

About 32 million Americans have food allergies, according to the Asthma and Allergy Foundation of America. It’s unknown how many have drug allergies.

No such warning has been issued in the U.S.

In fact, last weekend, the CDC said Americans with serious allergies can be immunized as long as they are monitored for 30 minutes after getting the shot.

However, the Food and Drug Administration (FDA) is requiring Pfizer to monitor for anaphylaxis in the U.S. and submit data, according to The New York Times, which first reported the reaction.

The agency has also advised people with allergies to consult with their physicians to ensure they are not allergic to any components of the vaccine.

In a preliminary analysis of Pfizer’s vaccine posted online last week, prior to FDA approval, a group of scientists said the jab was safe.

Among 20,000 volunteers, 137 given the shot had allergic reactions but so did 111 people who received the placebo.

This led researchers to dismiss the theory that the vaccine was a potential hazard. 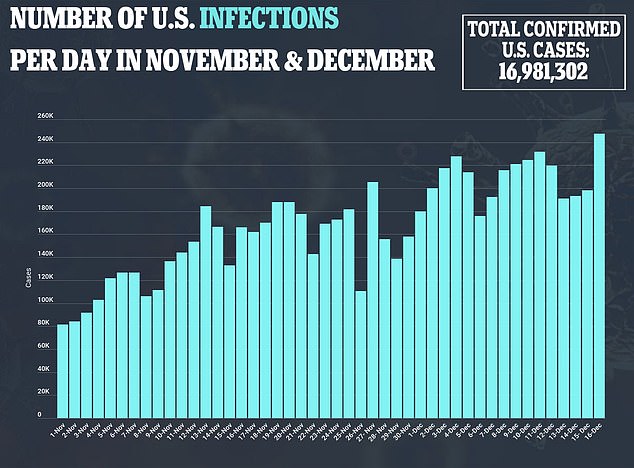 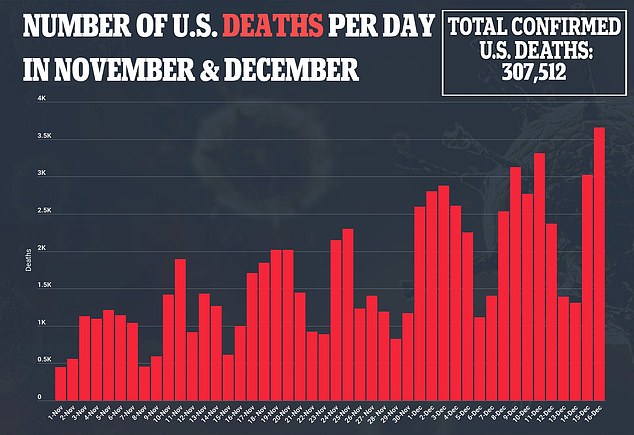 Four people given the vaccine were diagnosed with Bell’s Palsy, a type of facial paralysis.

However, trial scientists said there was no evidence the jab that caused the condition and that the figure was on par with the rate of Bell’s Palsy in the general population.

Pfizer’s vaccine began rolling out in the U.S. on Monday with 2.9 million people expected to receive the first doses.

No national tally is available, but a crude estimate based on the few states that have begun to release their vaccination data – New York, Michigan and Idaho – would suggest that thousands of Americans have been vaccinated.

On Thursday, New York City Mayor Bill de Blasio said 5,200 healthcare workers had been vaccinated out of the 87,750 doses received by the state so far.

More than 80 percent of Americans over 18 said they do plan to get vaccinated – but most of those (44%, in green) plan to ‘wait a bit’ after the authorization of shots to get theirs

A new poll shows that in all, only 55% of Americans say they are likely to take a COVID-19 vaccine if it were available today 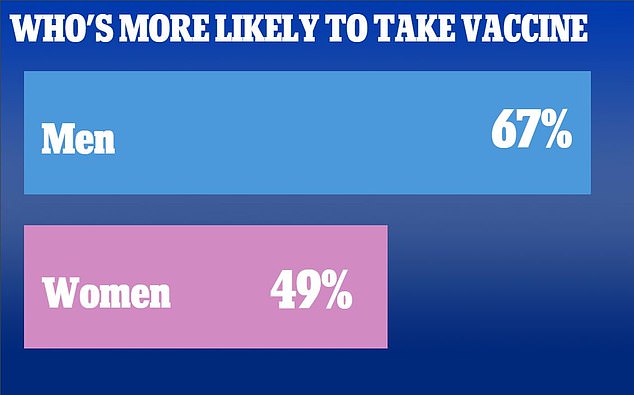 The poll, conducted by OnePoll for DailyMail.com, showed that two-thirds of men and half of women are likely to receive the jab

There are some fears that the allergic reaction will turn Americans off from getting the vaccine, which is needed to curb the spread of the pandemic.

A new poll found that nearly 84 percent of Americans say they will get a coronavirus vaccine – but most do not want to get the shot.

The survey, conducted by ABC News/Ipsos, found that 44 percent want to ‘wait a bit’ before being immunized.

Only two in five of the respondents said that they would get a vaccine as soon as possible.

It also found that 15 percent of Americans still say they will ‘never’ get a COVID-19 vaccine, with Republicans and minorities being the most reluctant.

And another survey, conducted by OnePoll for DailyMail.com, showed that just over half of Americans are willing to take the COVID-19 vaccine once it is available.

One participant in the poll said, ‘Vaccines need to be tested more than a few months before I would feel comfortable to get it. ‘

Another said they’d ‘like to see when others take it if there are any side effects.’

Furlough to be extended in Budget, Rishi Sunak indicates

'Almost had me murdered': AOC slams Cruz for his efforts to overturn the election 0

Number of Americans wanting to take vaccine has DOUBLED to nearly half in two months, poll finds  0