Of the 182,000 patients in the queue for elective care at University Hospitals Birmingham NHS Foundation Trust in December, just 38 per cent have gone at least 18 weeks without treatment.

Official guidelines state patients have a legal right to be seen within the timeframe but MailOnline’s analysis shows just two per cent of trusts hit this target at the end of 2021.

Five health boards, dotted across Chester, Buckinghamshire, Leicester and Worcestershire are failing to see even half of their patients within the deadline.

The average waiting time for a hip replacement, cataract surgery or other routine procedure in England is now three months, with the overall backlog — already at a record-high of 6.1million — exacerbated by the Covid pandemic.

Almost one in six trusts — or 18 out of 127 — are now taking more than a year to see a tenth of their patients.

Health Secretary Sajid Javid launched an extra £12-billion-a-year NHS Covid recovery plan to battle the backlog, which aims to end one year waits by March 2025. But he made no pledges to get more patients seen in hospitals within 18 weeks and ministers fear the problem will get worse before it gets better.

No10’s plan — funded by April’s 1.25 per cent National Insurance hike — has already been branded as ‘not ambitious enough’ and ‘falling seriously short’ of what is needed by Labour, health unions and even senior Conservatives. 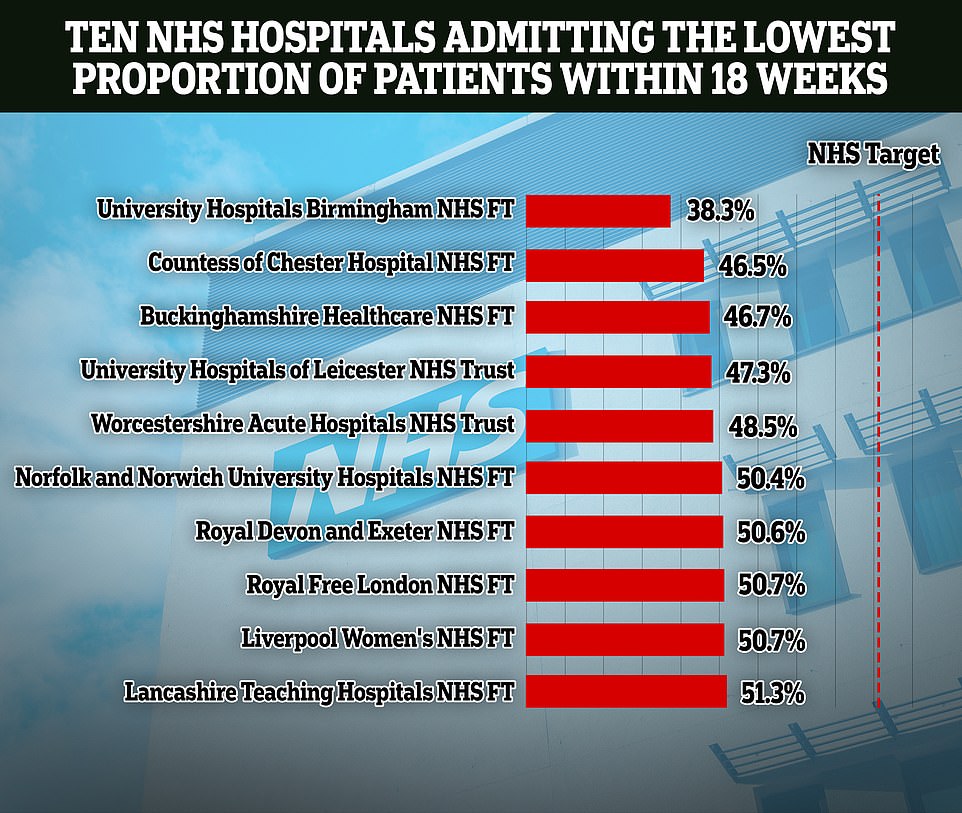 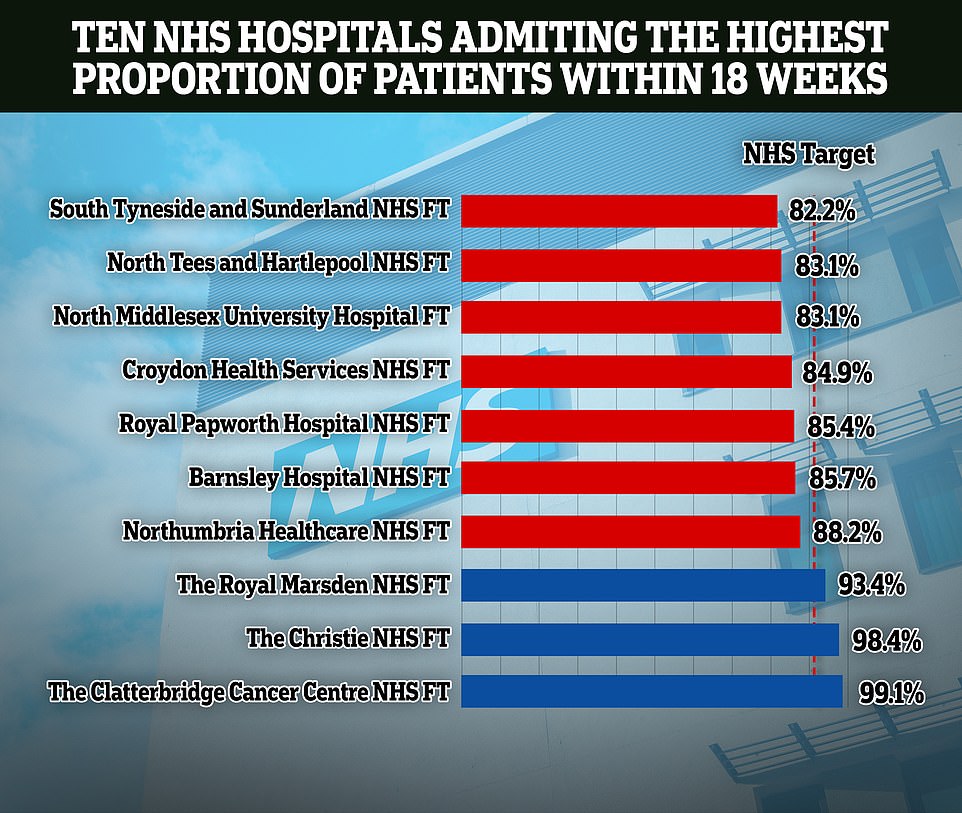 Only three hospitals — all of them linked to cancer care — are currently hitting the NHS target. Above are the top ten hospitals for seeing the highest proportion of patients within 18 weeks 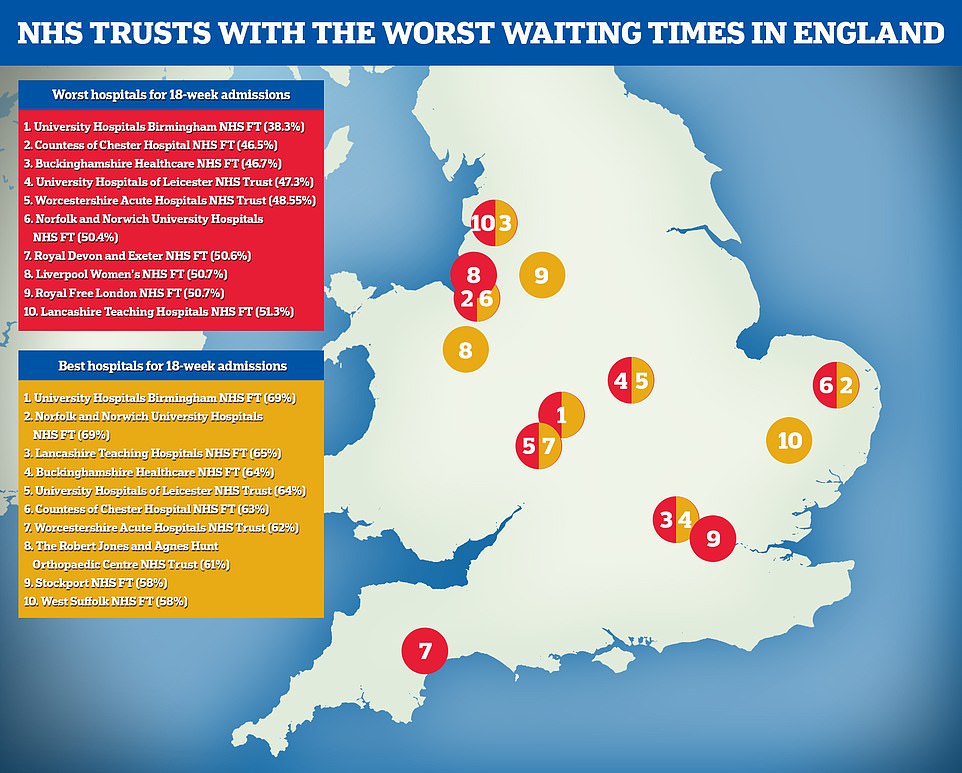 Overall, NHS trusts have not hit the target for seeing 92 per cent of patients within the 18-week deadline for more than five years, with the last time it was reached being 2016.

Before the pandemic hit, only 83 per cent of patients were seen within this time-frame nationally, with 4.4million on waiting lists and just 1,500 patients waiting more than a year for care.

But now just 63 per cent of patients are seen in 18 weeks nationally, with the number of year-long waits having spiralling 300-fold to 300,000.

Leaked Government forecasts suggest the situation will still get worse, with waiting lists set to keep growing for the next two years to 10.7million, or one in five people in England.

Patients in parts of the UK are waiting about two years for care, official figures show.

Last week the NHS made easily available the waiting times for routine treatments across the country, including hip replacements and cataract surgery, on new website ‘MyPlannedCare’.

It showed that of the 1,655 hospital departments across the country, 74 (four per cent) had waiting times longer than a year.

And it also revealed 11 had waiting times stretching beyond 78 weeks   or a year and a half.

East and North Hertfordshire NHS FT’s Pain Management Service was the worst, with patients waiting 104 weeks for care on average.

Rachel Power, chief executive of the Patients Association, told The Times: ‘Waiting for treatment, especially if you experience repeated delays or cancellations, is frustrating.

‘It’s disappointing to see some English trusts with waits at nearly two years.

‘We worry these long waits could lead to patients’ health declining perhaps to the point where treatment can become ineffective.’

Of the ten worst-performing trusts, three were in the North West, with two in the Midlands and South West, and one each in the South East, East of England and London.

He told MailOnline: ‘The Conservatives are so incompetent they have now come up with a plan that sees patients paying more in tax but waiting longer for care.

‘People are forced to wait unacceptable lengths of time for treatment, often left in pain and discomfort for months or years.

‘The Conservatives blame Covid, but after a decade of Tory mismanagement, the NHS went into the pandemic with record waiting lists, 100,000 staff shortages and already not treating patients on time.’

The NHS also publishes statistics on the time taken for trusts to see the final tenth of patients on their waiting lists.

This data shows Norfolk and Norwich Hospitals NHS FT and University Hospitals Birmingham NHS FT were the worst trusts, taking a year and four months to get to this group.

They were followed by Lancashire Teaching Hospitals NHS FT, with nine in ten patients waiting up to 65 weeks, and Buckinghamshire Healthcare NHS FT, which had 64-week waits.

Morgan Vine, the head of policy and influencing at charity Independent Age, warned the figures revealed the sheer volume of patients in pain and ‘deteriorating rapidly’ as they wait for care.

She said: ‘Regular pain is the hidden burden that many older people on a waiting list have to deal with on a daily basis. It seeps into every part of life — making it harder to sleep, harder to leave their homes and harder to engage with friends and family.

‘Current plans put forward by the government to reduce waiting times are a welcome acknowledgment of the problem, but disappointingly for those still waiting, there is little in the way of support as they try to cope with their daily pain.’

Analysis of NHS England performance statistics show just three out of 127 trusts across England are managing to see almost all patients within the deadline of 18 weeks.

The Clatterbridge Cancer Centre NHS FT was the best performing trust, seeing 99 per cent of patients within 18 weeks. It was followed by The Christie NHS FT (98.4 per cent) and the Royal Marsden NHS FT (93.4 per cent).

These were also the health boards with the shortest average waiting times, with most patients at the Christie seen within 11 weeks followed by the Clatterbridge (14 weeks) and the Royal Marsden (16 weeks).

Even though these are major cancer units, the NHS data strictly looks at routine operations and does not include cancer patients — who need to be seen quicker. 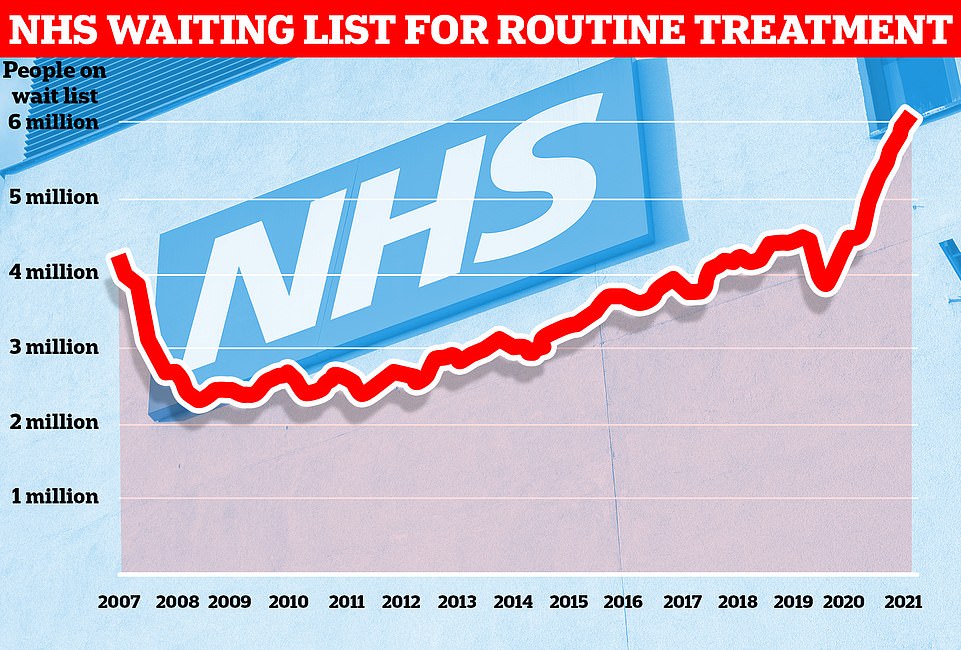 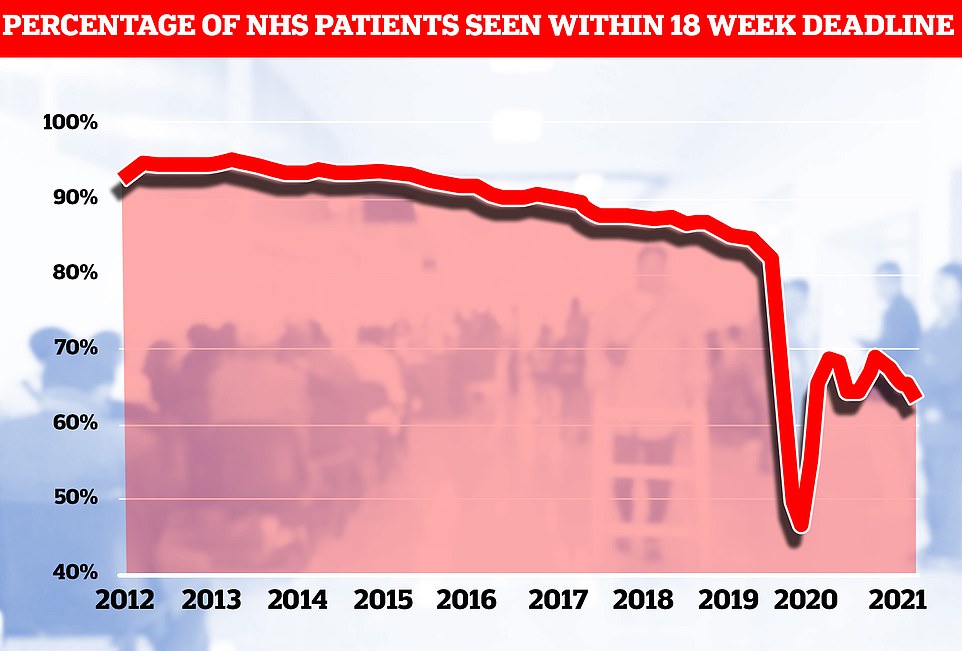 The percentage of patients seen within 18 weeks across England is shown above. It fell dramatically when the pandemic hit in 2020, and is still pointing downwards as hospitals struggle against a backlog of patients 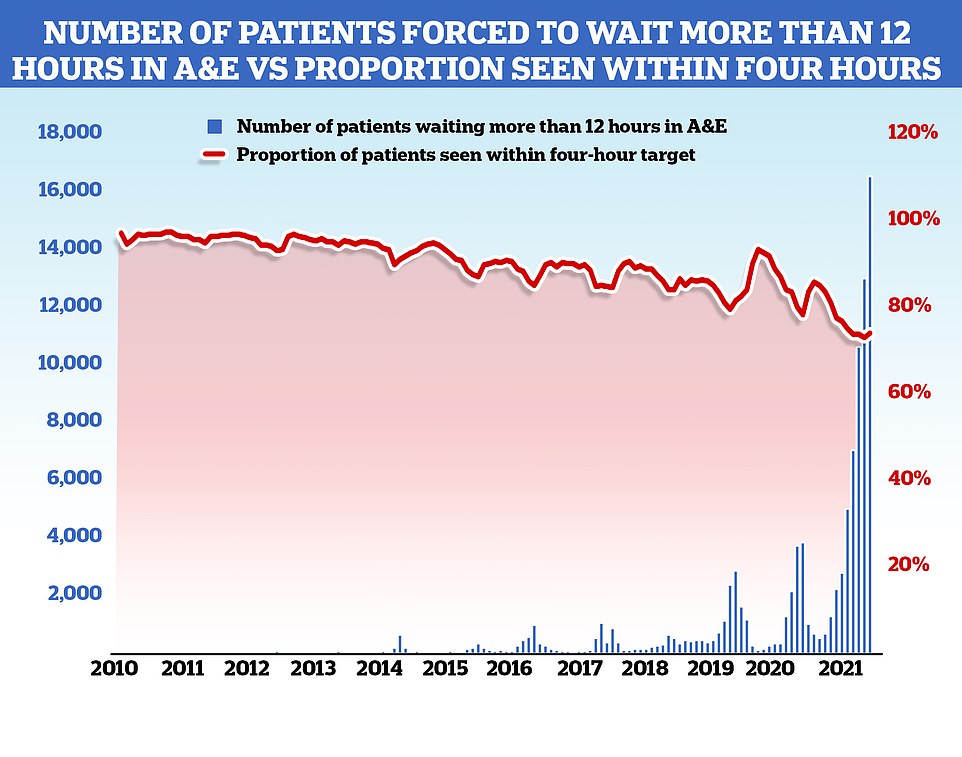 NHS data shows more than 16,000 people in England were forced to wait in A&E for more than 12 hours in January — the highest figure ever recorded (blue bars). Meanwhile, the proportion of patients seen within the health service’s four-hour target remained below 75 per cent for the fourth month in a row (red line)

The Government has said it is on track to recruit 50,000 more nurses in the NHS by 2024, though the claim has been called into question by a union.

A progress report published on Monday shows that over 27,000 more nurses are already working in the health service compared to September 2019, bringing the total number to 327,907, the Department of Health said.

That means it is more than halfway to meeting the Conservative Party’s 2019 manifesto promise of 351,000 nurses by March 2024, according to the department.

Boris Johnson said: ‘It’s fantastic to see the progress we have made towards our manifesto commitment of delivering 50,000 more nurses by 2024. There are now over 27,000 more nurses providing exceptional care and treatment for patients across the country every day.

‘Nurses are the absolute backbone of our NHS, without whom we would have been lost throughout the pandemic and who will be vital in helping the NHS tackle the Covid backlogs’.

The Prime Minister added that the Government will ‘continue to do everything we can to recruit and retain even more nurses and to support our NHS’.

The Government set out its strategy for adding more nurses in the progress report, which involves hiring more nurses domestically as well as internationally and retaining existing workers.

International recruitment is expected to add around 51,000 to 57,000 nurses over the next two years.

Tracey Loftis, the head of policy and public affairs at charity Versus Arthritis, said people were being left in ‘agony and distress’ and had their lives ‘on hold’ due to treatment delays.

‘Hip and knee replacements are some of the most effective treatments on offer to improve someone’s quality of life and mobility,’ she said.

‘We have an operation that works brilliantly and yet people with arthritis face the uncertainty of long waits to access them.’

Chief analyst at health charity The King’s Fund, Siva Anandaciva, said the national list was made of ‘many people anxiously waiting for care in pain and discomfort’ and ‘in some cases’ at risk of their health deteriorating quickly.

Previous research from the charity found people in deprived areas were twice as likely to wait over a year for hospital care than those in more affluent areas, on average. She said although the reasons for this were not known, it could be linked to poor health in the local population, Covid and staff shortages.

She added: ‘We are still waiting for a national strategy to tackle the chronic staff shortages that have hamstrung services for many years.’

NHS trusts with the longest waiting times blamed the pandemic for the delays, and said their staff had worked ‘tirelessly’ and gone ‘above and beyond’ to help patients.

Many said they were now investing in expansion of hospital units to help them get through the growing backlog of patients.

Gavin MacDonald, a boss at Buckinghamshire Healthcare NHS Trust which had the third worst waiting times, said: ‘To enable us to continue essential clinical services whilst caring for increased numbers of patients with Covid, it has sometimes been necessary to postpone some non-urgent appointments and admissions.

He added: ‘We are ahead of plan for the second half of 2021/22 in terms of increasing diagnostic capacity at the Alexandra and Kidderminster Hospitals, as well as the number of operations taking place at our Alexandra hospital site, to further increase our capacity.’

A spokesperson for Lancashire Teaching Hospitals NHS Foundation Trust — the tenth worst, said: ‘Our staff have gone above and beyond over the last two years to care for those most in need and we are hugely grateful to every single one of them for their extraordinary efforts and achievements.

‘We recognise the pandemic has impacted the amount of planned care we have been able to provide and we are working hard to maintain the plans we have put in place to reduce these waiting lists to provide the best possible care for our communities.’

University Hospitals Birmingham NHS Foundation Trust did not respond to a request for comment.